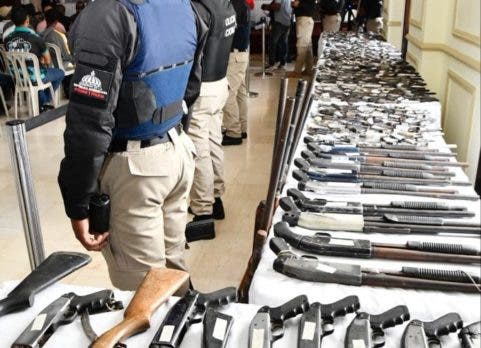 “Firmly and according to the law:” Chu Vásquez and MIP receive massive seizure of weapons in San Cristóbal.

There were 282 firearms of different calibers recovered. In the group, stolen, legal, illegal, and others are retained. Illegal weapons were destroyed.

The alliance between the Attorney General’s Office, the National Police, and the Ministry of Interior and Police continue to bear fruit. This time it was a large seizure and recovery of firearms in this province, which were handed over to Minister Jesús Vásquez Martínez. 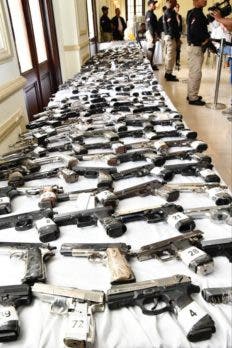 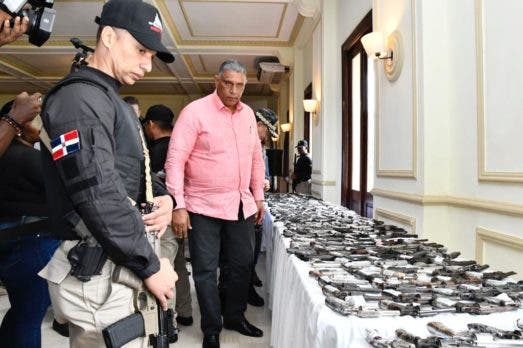 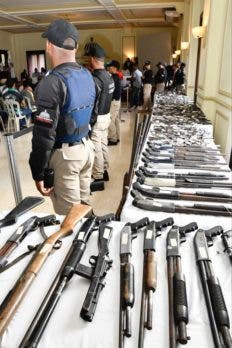 “At the time of intervening San Cristobal, we noticed that most of the crimes reported in this territory were committed with illegal weapons. Moved by the need to guarantee the security of honest and hardworking people, such as the population of San Cristóbal, we decided to act firmly and, above all, attached to our laws,” said the head of the MIP.

At the Ministry of Interior and Police, the Firearms Registration and Control Directorate received this Friday from the Public Prosecutor’s Office in San Cristobal 282 firearms of different calibers seized and with which crimes were committed. They are part of judicial processes with coercive measures or trials on the merits that have been sentenced.

The firearms were handed over by the Public Prosecutor Fadulia Bethania Rosa Rubio and received by Minister Vásquez in a ceremony at the Governor’s office with the presence of Governor Pura Casilla, the director of the National Police, Major General Eduardo Alberto Then, deputy ministers of Weapons and Citizen Coexistence of the MIP, Aníbal Amparo, and Fernando Nolberto Brito, respectively.

In addition, the mayor, José Montás; the Attorney General of San Cristóbal, Faustino Pulinario, the director of the Registry and Control of Possession and Carrying of Weapons, Sterling Pérez; and community members from different sectors.

During the delivery, Minister Vásquez highlighted the joint work of the Public Prosecutor’s Office and the police since they represent the main actors who allow the weapons to be received. He said that the work of the Interior and Police is to receive and safeguard them until their end. “Then those that have their owners, as, for example the stolen legal ones, immediately the MIP receives them and contacts them so that they can be returned to them.”

Among the weapons received, there are short and long guns, including 192 pistols, 60 revolvers, and 30 shotguns. All of them were retained in crimes prosecuted by the National Police. Once the person is arrested, they are placed under the control of the Public Prosecutor’s Office, which follows the criminal process.

Once the process is advanced, or the evidence base is known, the weapons are sent to the Ministry of Interior and Police, which has their final safekeeping in the citizen security plan and the voluntary disarmament plan initiated by President Luis Abinader.

With this, San Cristóbal removed from its territory 282 weapons from circulation in the hands of criminals. “The land of our Constitution must breathe an atmosphere of peace, security and peaceful coexistence, and with the hard work of all, we are taking important steps towards that environment that we all deserve. We will continue attacking crime, strengthening citizen security and promoting peaceful coexistence in San Cristobal and in every corner of the country,” said Minister Jesus Vasquez Martinez.