Analysts: The US, France and Canada are not interested in helping Haiti 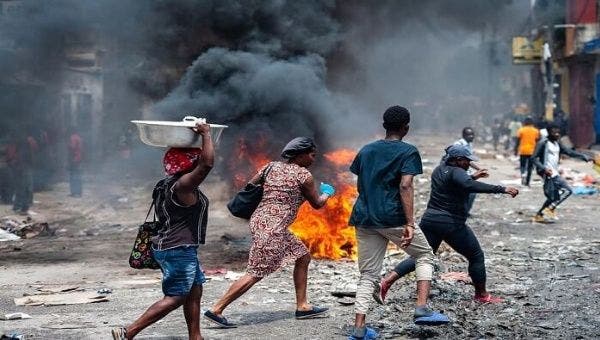 While Chez Checo recommends that the Government not trust that the powers will solve the crisis, Castillo believes it is necessary to continue calling on them to come to Haiti’s aid.

Experts and analysts concerned about the Haitian crisis agree that given the coldness of the international community towards Haiti, the Dominican Republic has no choice but to take measures on its own to avoid further adverse effects.

Pelegrin Castillo and Miguel Guerrero were among those present.
Historian José Chez Checo and political leader Pelegrin Castillo made their criticisms in various aspects at the last Forum of the Pedro Henríquez Ureña University (UNPHU) entitled “Present and future of relations with Haiti: the challenges of good neighborliness.”

Chez Checo, while speaking on the topic “Haitian Immigration in the DR: A very serious problem,” after reaffirming the marked difference between the cultures of the two countries, cited 26 measures to be taken by the State, among them: not to trust that the United States, France, and Canada will take care of Haiti because they are not interested and on the contrary their agenda is to merge both countries; not to allow illegal entry, because it fosters social instability, delinquency, and criminality; seal the border; support the construction of the wall and implement border development.

In addition, the issue of midwives, brought by mafias, should be addressed. Furthermore, entities concerned about Haitians in the DR, such as USAID, the European Union, the Catholic Church, and Citizen Participation, should be required to set up mobile hospitals in Haiti; repatriations should not be stopped; those who employ Haitian illegals should be fined; immigrants needed by the country should be regularized with all their guarantees, among others.

When it was the turn of political leader Pelegrin Castillo, he assured that Haiti is not a problem of migratory flow but of an international nature, where the powers are trying to dilute the crisis in the fragility of the Dominican State.

He asked not to give up the demand to the international community not to lose the moral factor of the struggle because from outside the country, a profile of a “Criminal State” has been created to justify a future intervention on the island.

Guess the only way to press the above countries to help Haiti would be China or Russia to send men and materials there.

China getting involved in assisting would be the greatest gift to Haiti and Haitians.

Canada and the USA have made proposals to help Haiti and yes, they have taken action – worth millions of dollars. That includes sending large tanks to bolster the Haitian army so that people can get access to water and gas. the USA was the first to take action. The difference is that Canada listens to the Haitian elitists who say that Haiti can solve the problem on its own. Really ? Tell that to the ordinary Haitians who are without money, food, potable water and afraid to walk in their neighbourhoods because the thugs will kidnap them. Many wealthy Haitian elitists do not even live in the country. They are in places like Montreal, Canada and influence their Canadian politicians. But Dominicans should remember – you make a lot of money from exporting so many products to Haiti. Many of your wealthy people hire Haitians to do work because it is cheaper . Be patient with Haitians They do not want to be here but have no choice.

-1
Reply
My Name Is Not Important

The US, Canada, and France don’t want to do anything with Haiti. Russia is too busy with Ukraine, and China is too busy with itself, but I am assuming that those countries have no interest with Haiti. The Dominican Republic has to get its hands dirty to pull Haiti out of the situation. It’s not just a Haitian problem, it is also a Dominican problem. Military intervention is the only option.

-4
Reply
Dave Lopes
Reply to  My Name Is Not Important

No, DR’s only responsibility is to seal its border and stop all diplomatic and commercial and migratory relations with Haiti. Nothing positive can come from interactions between these two natural enemy nations.

Very well said, people like these forced our country to pay for their bills for years and we still got screwed over, this is not our problem, our problem is the illegals coming here.

His name is not important and neither is his opinion.

3
Reply
My Name Is Not Important
Reply to  Dave Lopes

Having a “natural enemy nation” is not going to solve everything, and sealing the border is not going to help either of those countries in long term. That can lead to several polarization and escalate the conflict.
People like you see Haiti has an enemy of the DR, but capital doesn’t. You can drove Haitians out of the countries, but corporations and farmers keep them. Dominicans could replace them with mechanics which can double the product to make and increase profit, but unfortunately many of you are too stupid to start advancing into a developed country, and many left the countries to richer countries like Spain, USA, Netherlands, Chile, etc legally or not, treated like second-class citizens and less of a human from other people just to find a better life and opportunity that the country doesn’t have one. That is how the Haitians felt for decades all because people like you are been thought to hate.
It is best to work with the Haitians. Set aside the difference and make Hispaniola a better place for both of you.

You are calling us stupid and in turn begging us to take on the biggest financial burden on the region (you) which has never been a successful country on its own except when the french were in control. Always looking for someone else to solve your problems.

Not only that, but you also have impunity to say whatever and do whatever you want on social media from insulting to openly calling for massacres.

But of course you’d want to be bailed out, after all the jobs offered here seem at least more appealing but tell me how would loosing jobs and having to waste money on education, healthcare etc, be profitable for us? It wouldn’t and even if that was the case, why would we give up our sovereignty for people like you ungrateful, conceited, irrational etc.

You know you can’t control yourselves, that’s why you bring up these “economic prospect” in which nobody is interested because if you didn’t exist we’d be at least at the same level as Costa Rica.

It’s not a coincidence that 11 out of the 15 richest countries in the world have small populations (not counting territories which would further prove my point) plus overpopulation is a thing in our country (225 per km2) not an optimal level.

You’re either stupid or lying, neither would surprise me.

1
Reply
Mike
Reply to  My Name Is Not Important

China will gladly come in to Haiti. They’ve taken over many African countries during their hard times.theyve bought up massive amounts of farm land in the us.they have sunk their teeth into many countries at their worst times.ever notice how many more Chinese stores that have popped up since covid in the Dr?there is a reason for this plan

The Ministry of Public Health announced this week that 85,000 doses of the cholera...

Guatemala asks the Dominican Republic for help on consumption scam