He built it and they did come: the Russ Wieser story 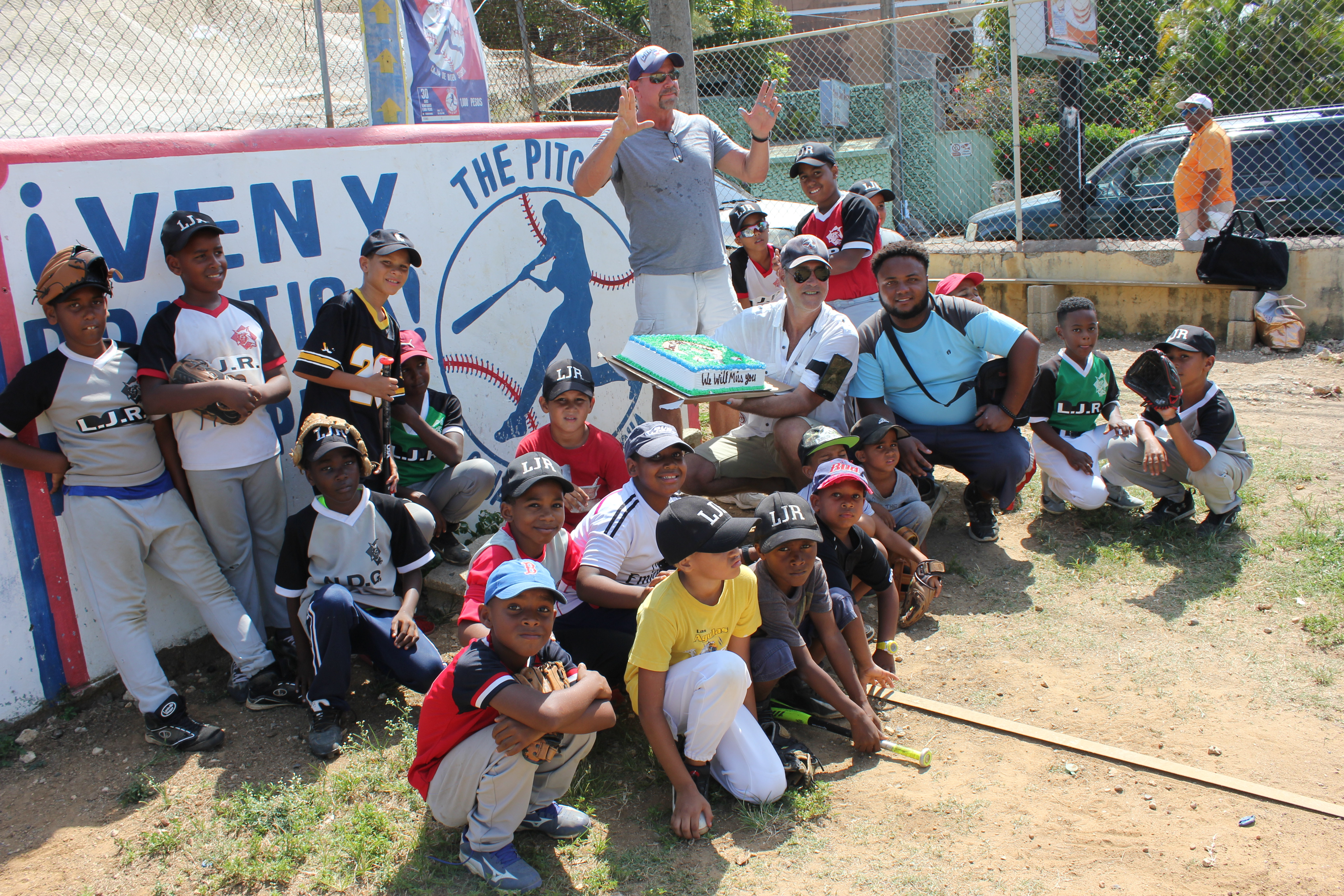 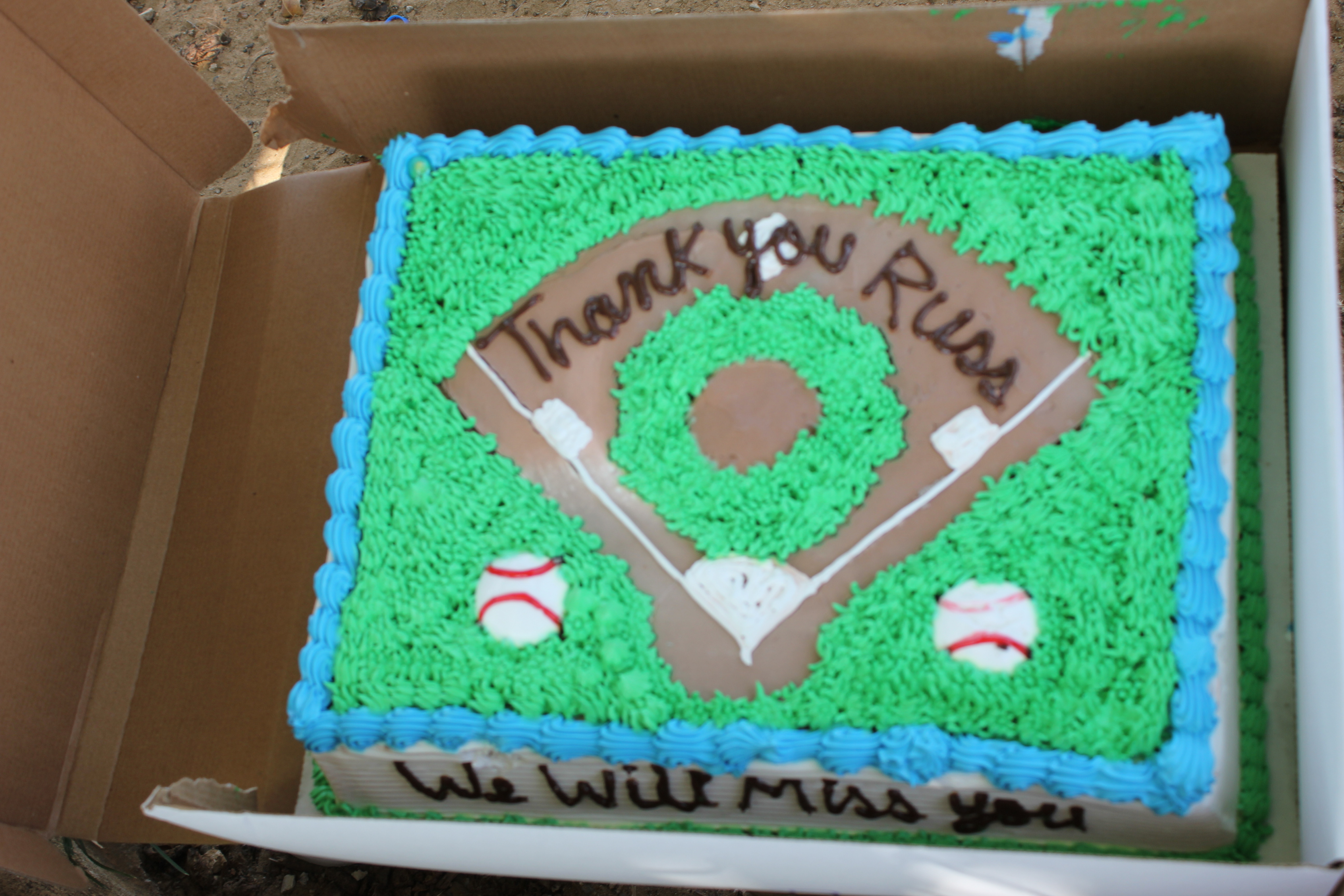 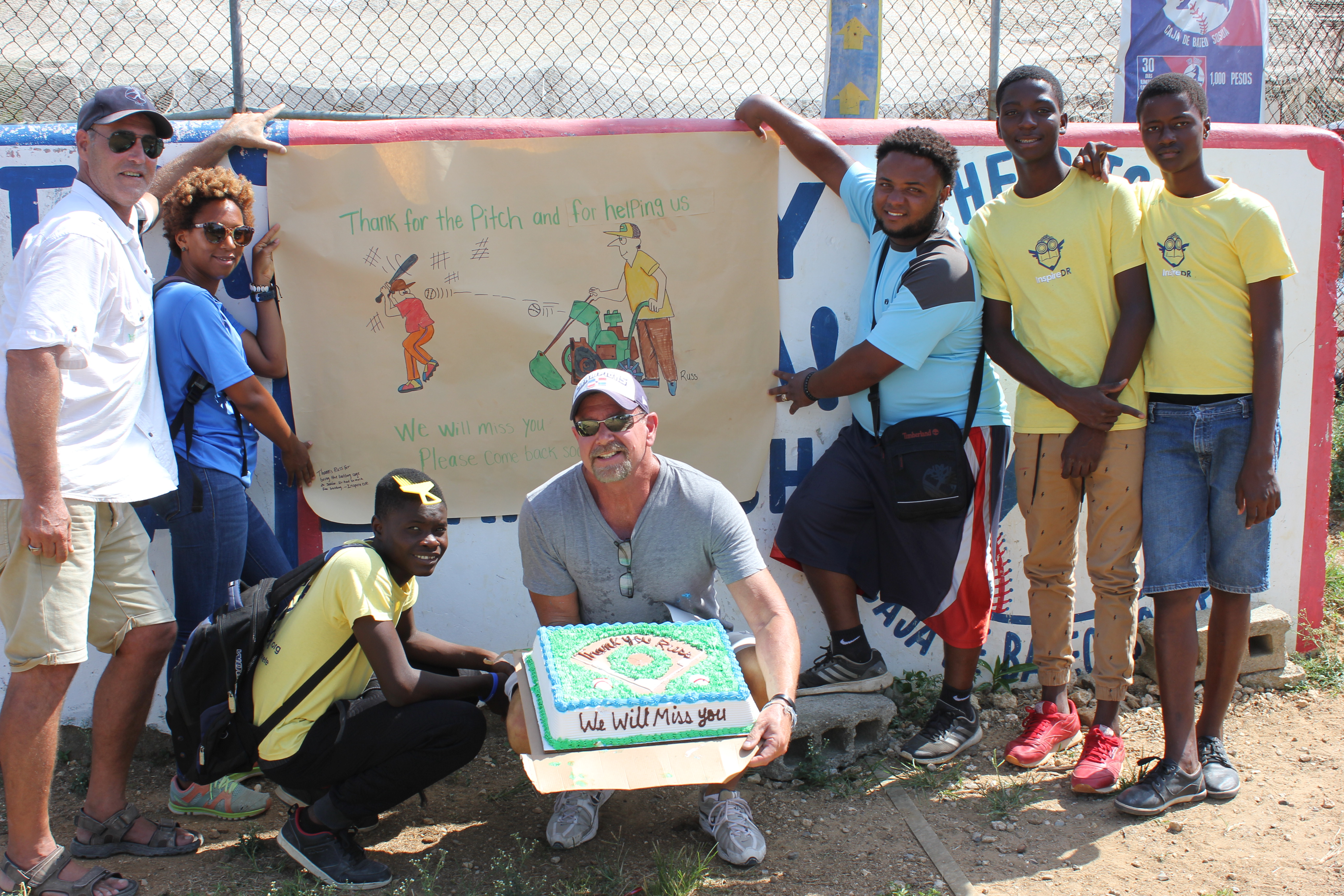 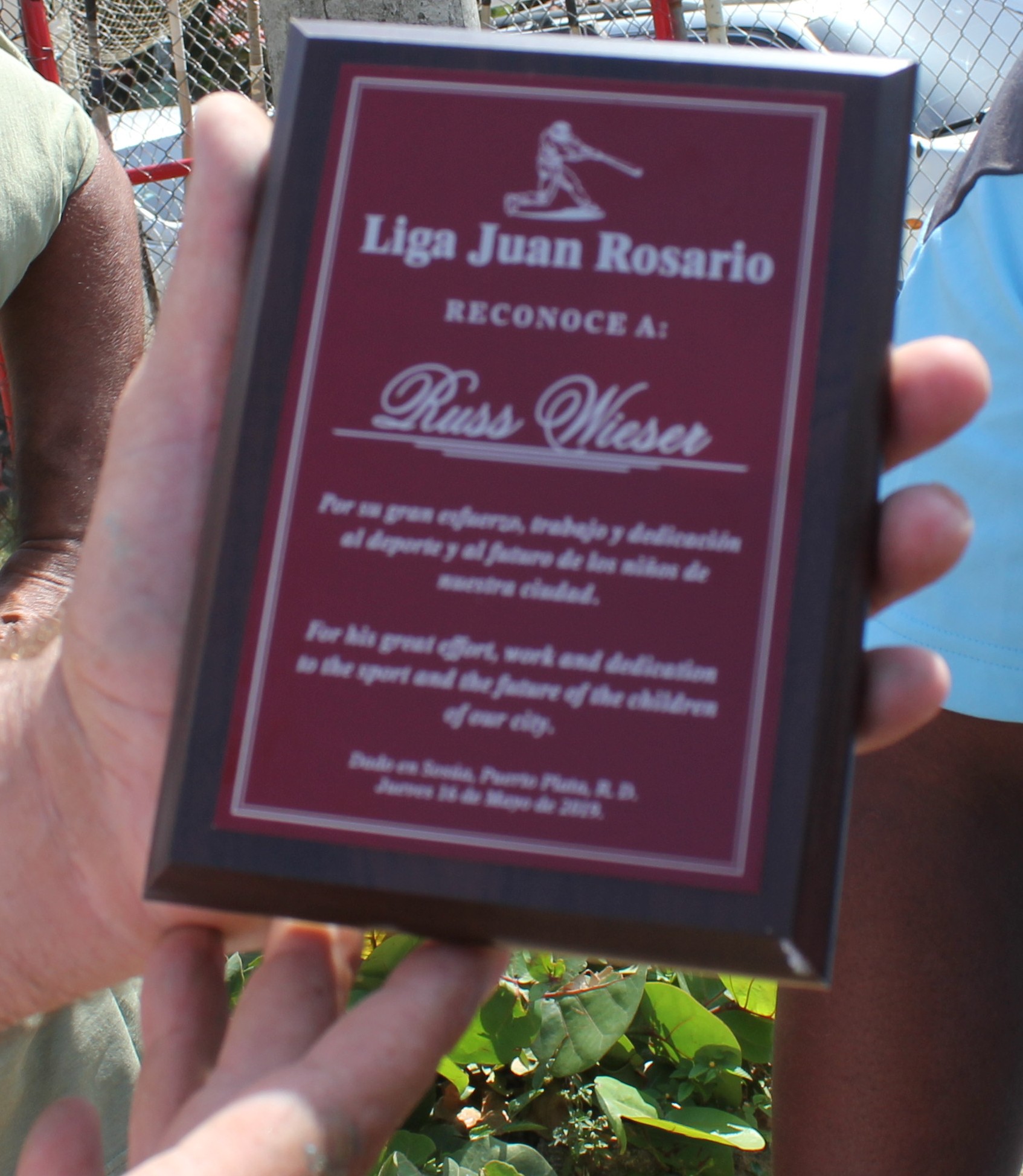 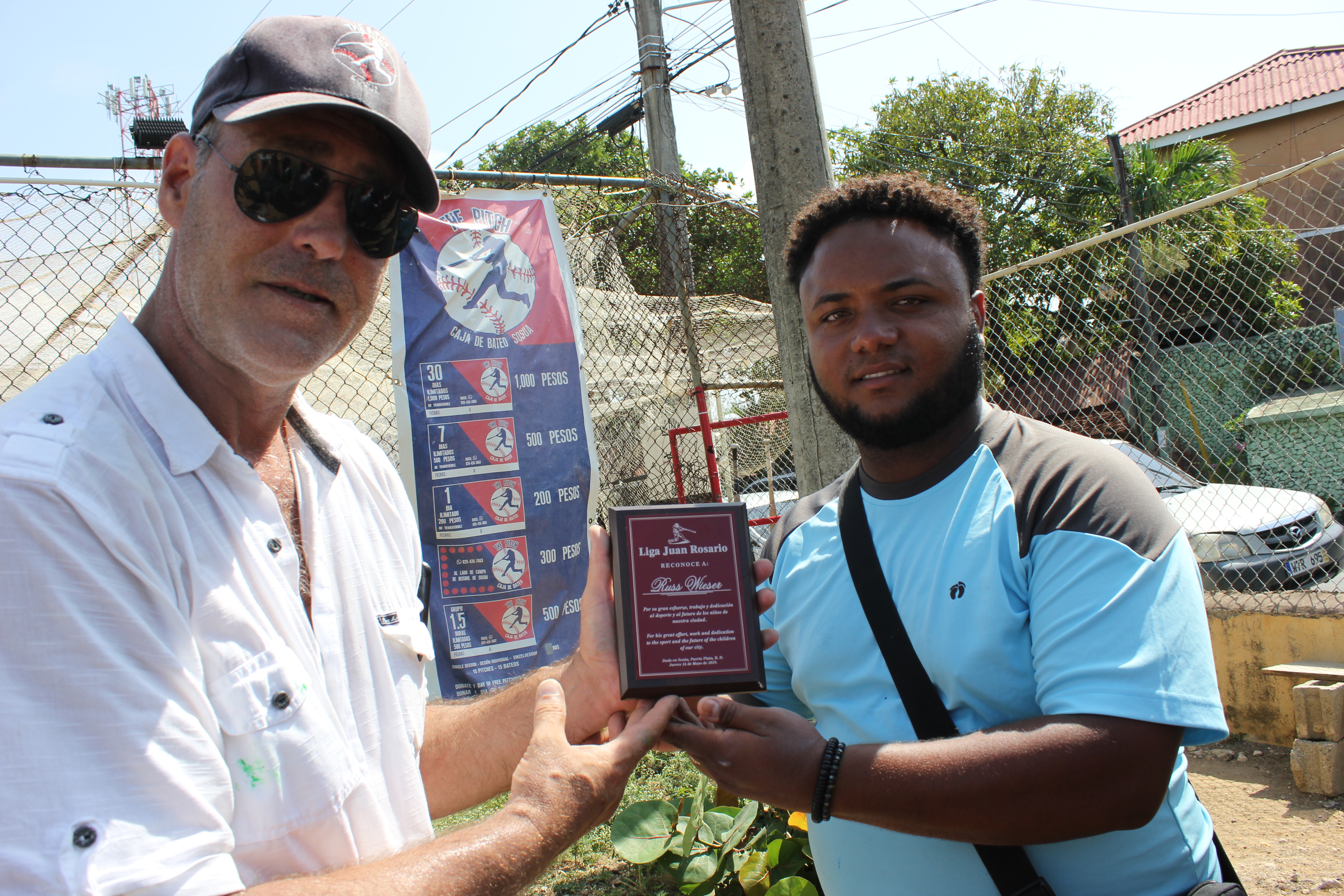 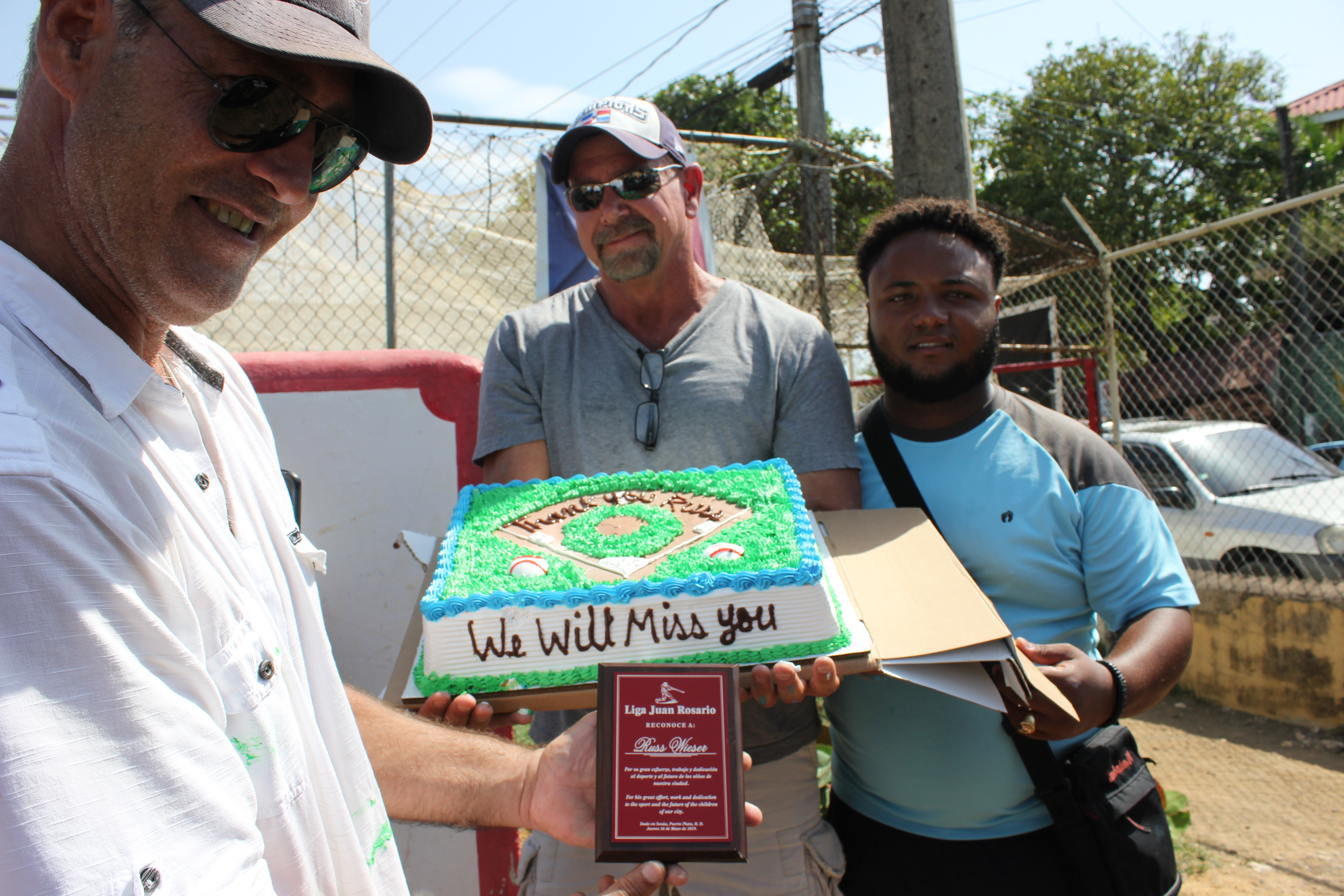 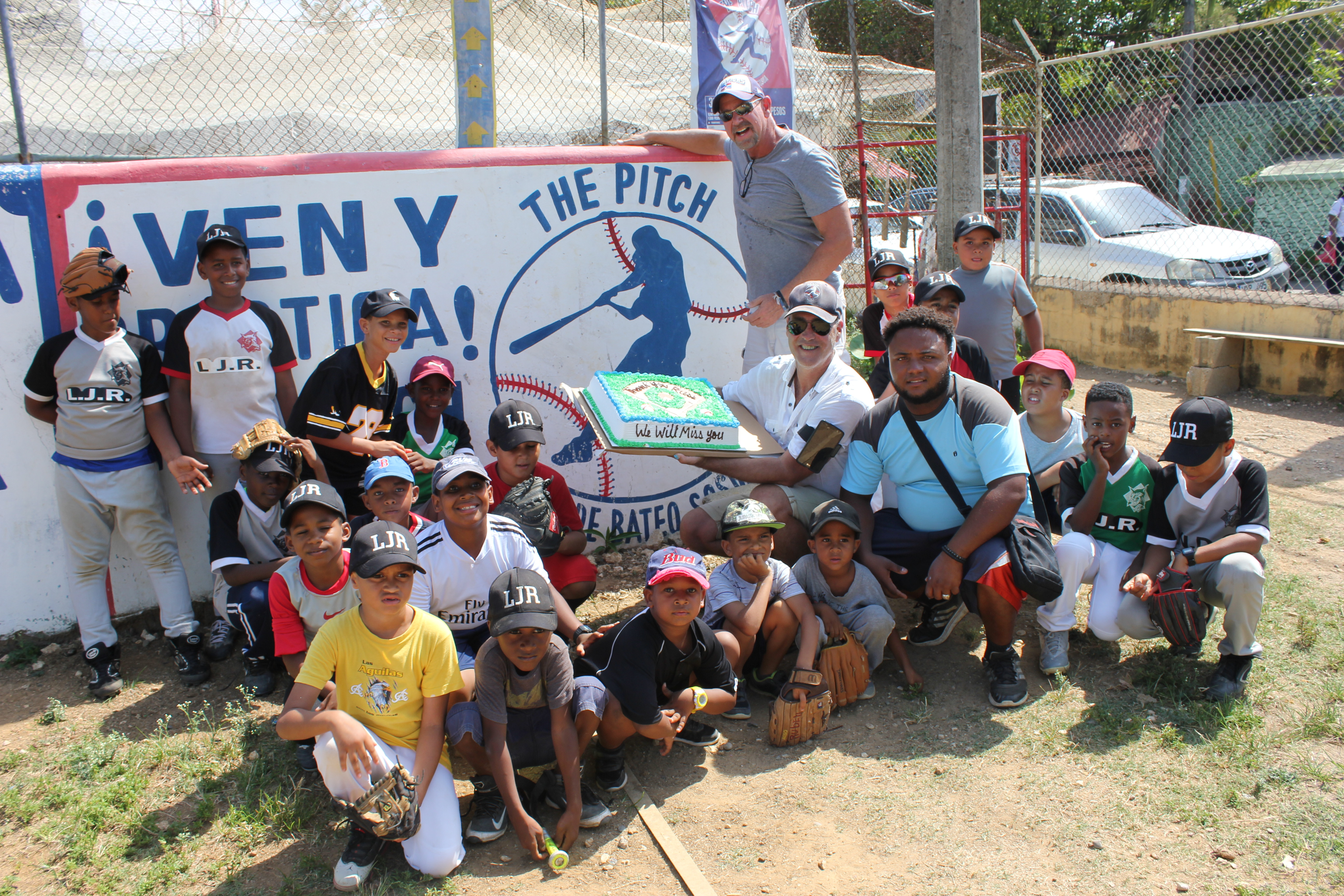 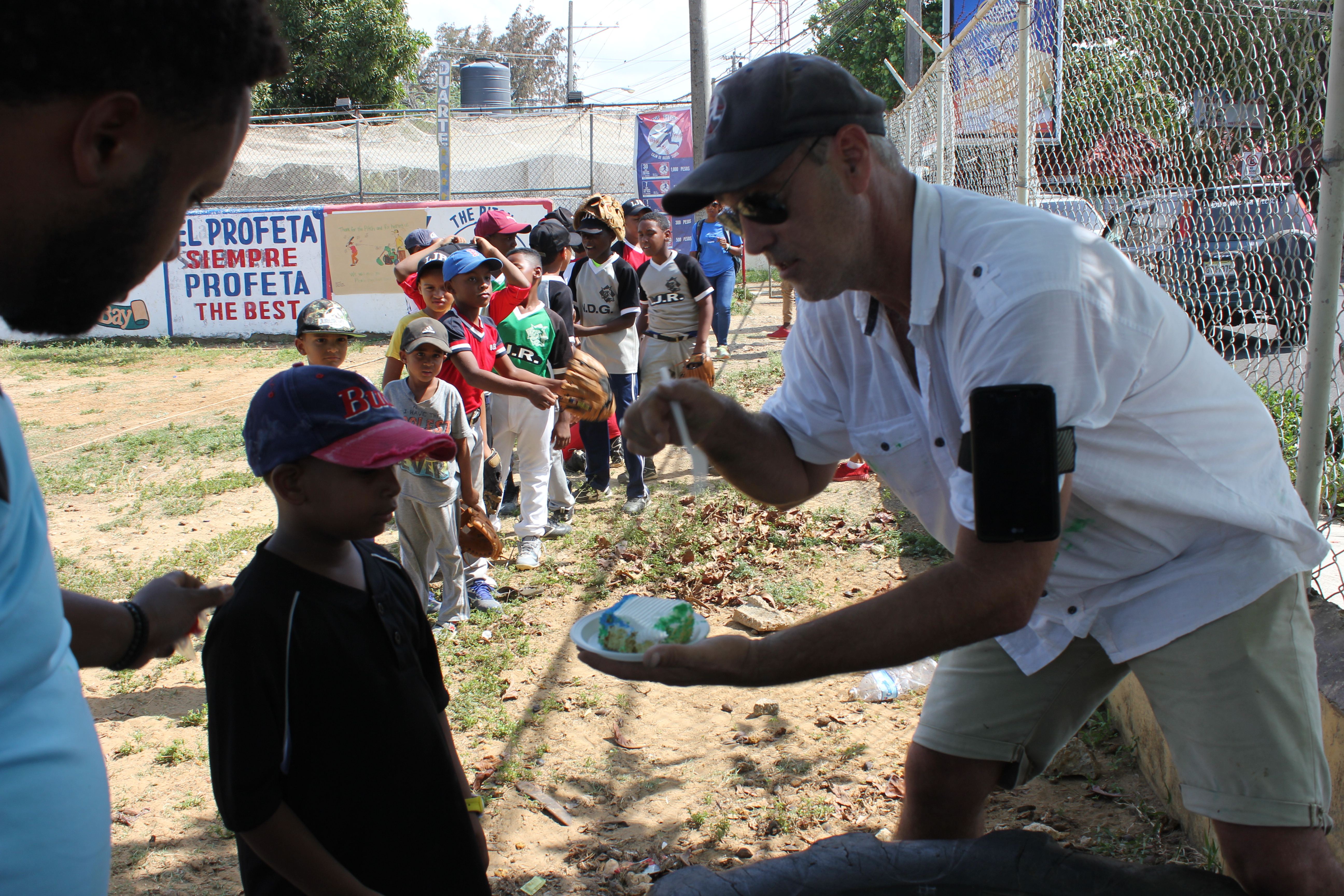 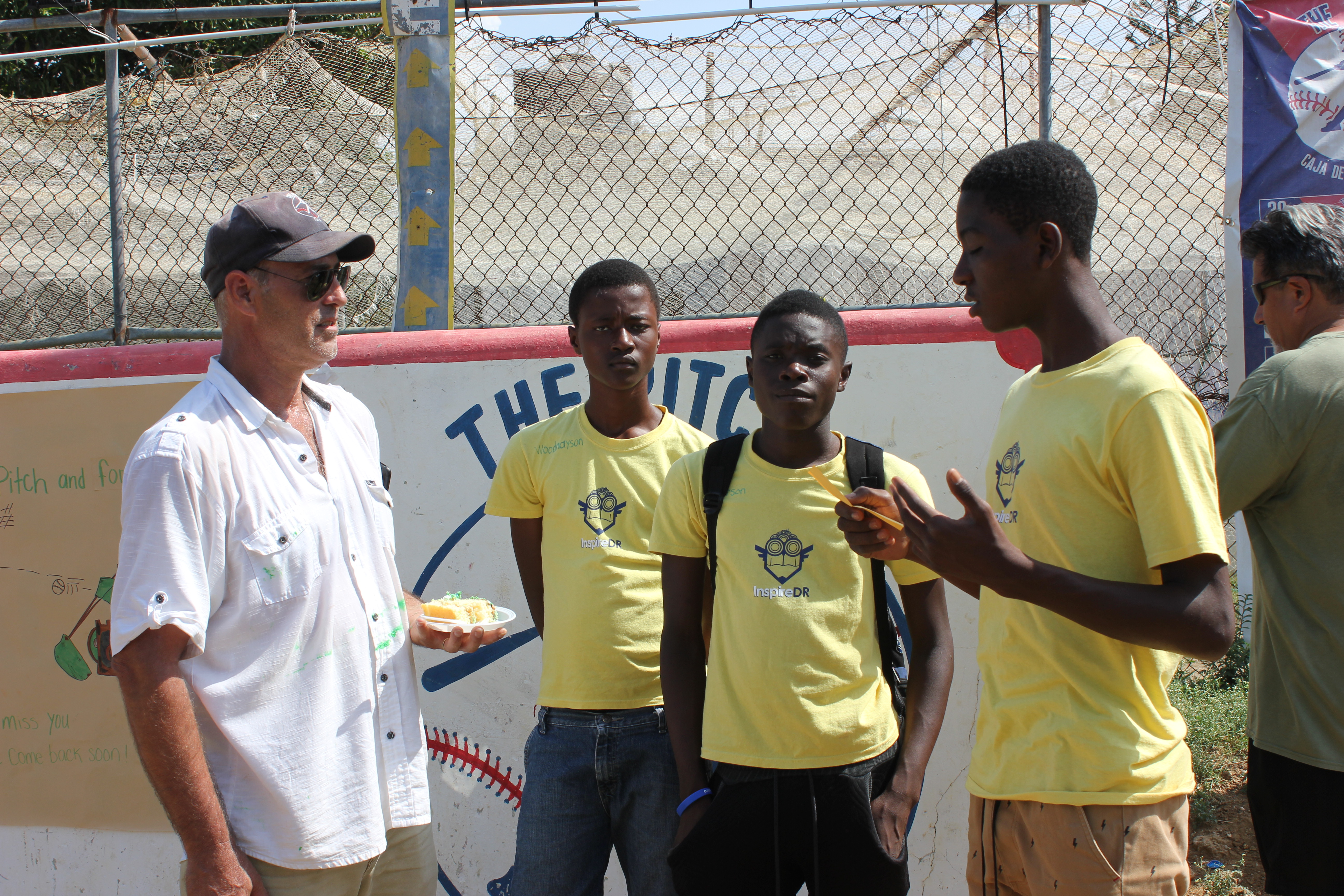 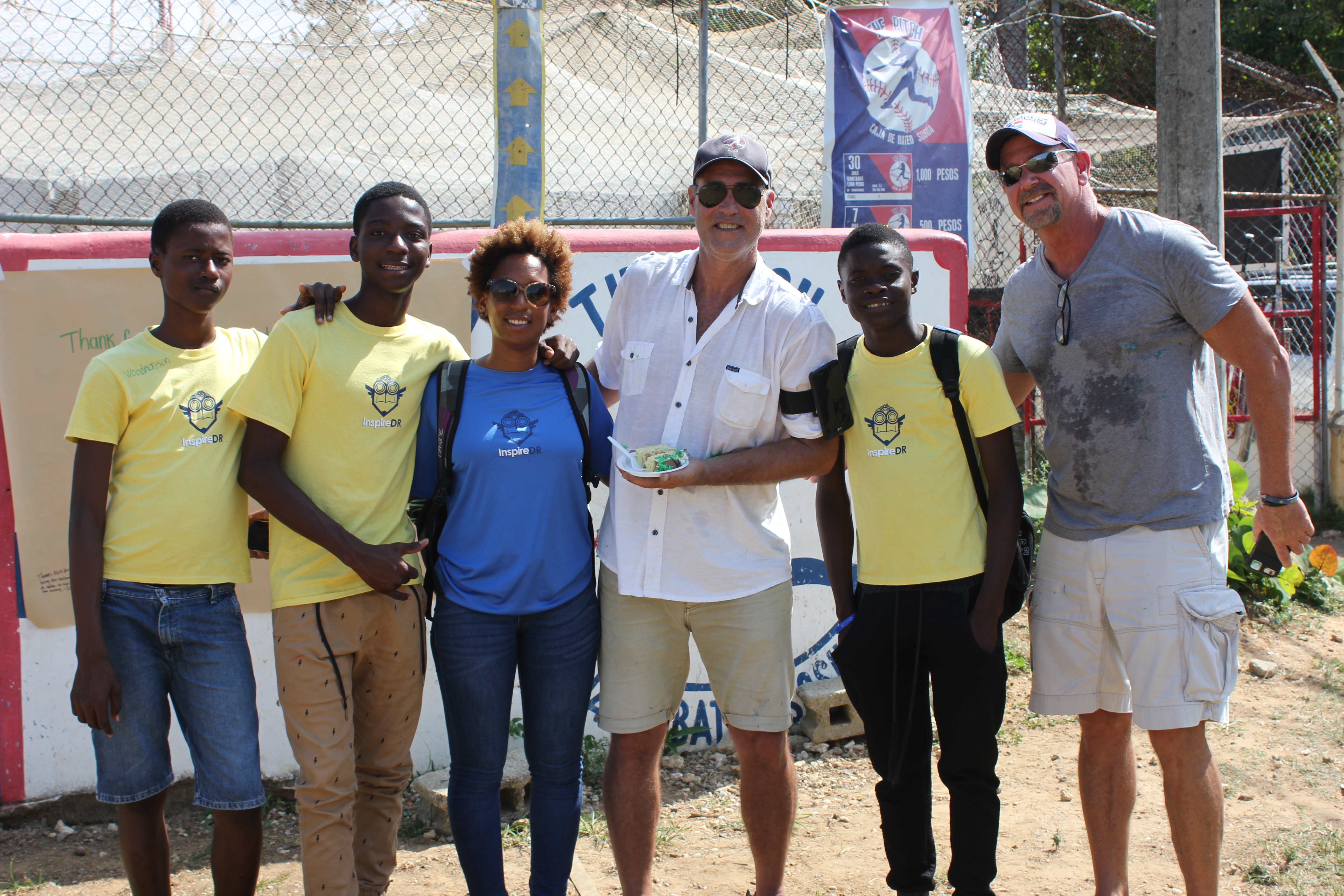 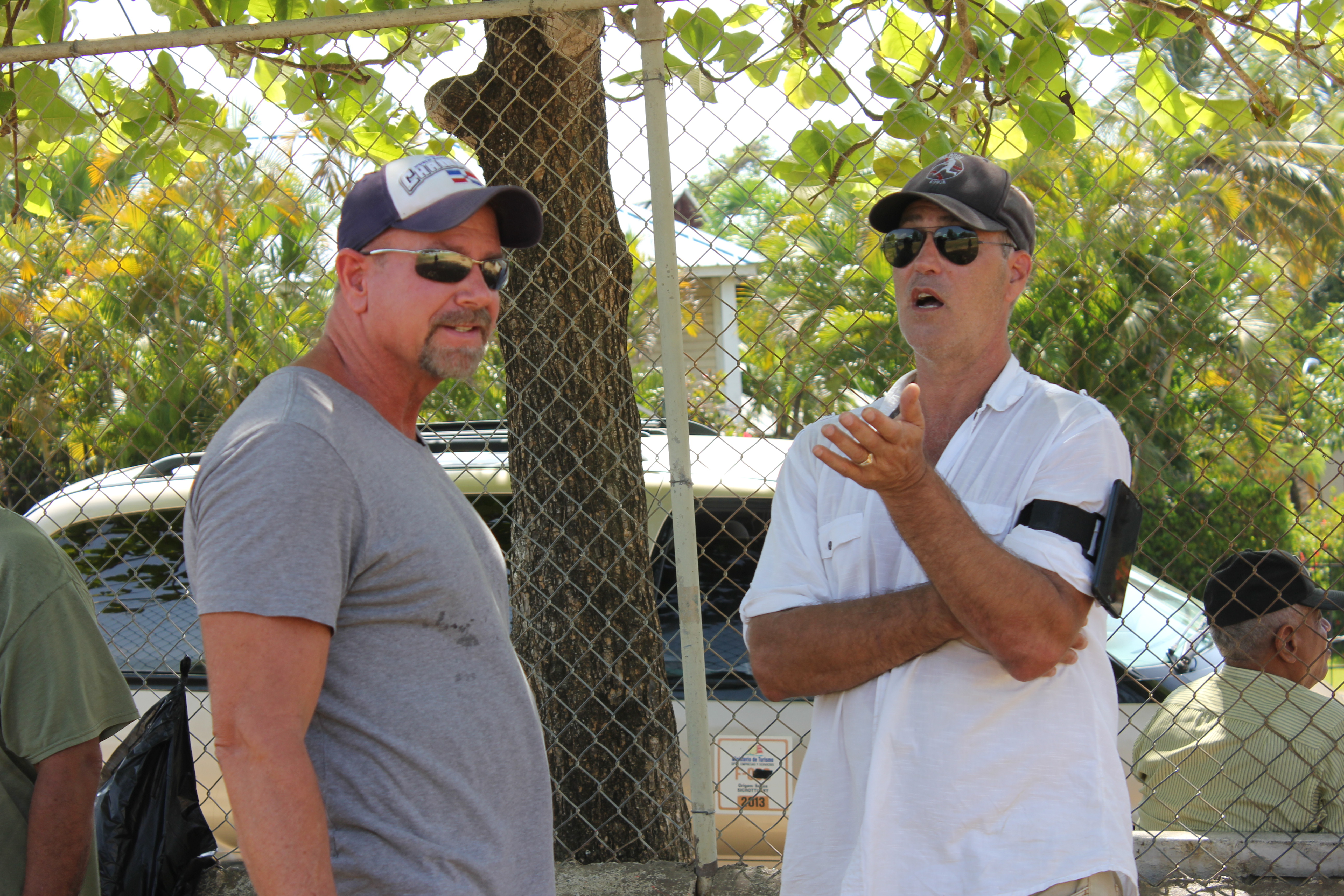 It’s a reasonably well-known fact among people who make it a point to know such things that baseball is the most popular sport in the Dominican Republic.

According to popular urban legends, baseball came to the Dominican Republic via United States Army soldiers stationed there who introduced the game to some fascinated locals who took instantly to the game.

In reality, baseball found its way to the Dominican Republic via its Caribbean neighbor, Cuba, which brought the sport to the DR after having been introduced to the game in the 1860s by Cuban students returning from colleges in the United States and American sailors who ported in the country.

Baseball was becoming very popular and widespread throughout Cuba in the early 1860s. The Ten Years War (1868-1878) developed and forced many of Cuba’s most passionate baseball fans to flee the country. Many of these individuals found refuge in the Dominican Republic, where they introduced the sport to the island’s natives in the late 1880s and early 1890s. The Dominicans were highly receptive to the sport, and soon, organized games and tournaments across the country.

As of March 2019, there are 102 Dominican players in American Major League Baseball. Accordingly many young Dominican players dream of future success in baseball. In addition to throwing, fielding, and running, skill with a bat is an essential part of being a well-rounded ballplayer.

And this is where another story about the transformative power of this enigmatic and beautiful island unfolds. This is the unlikely tale of a mentor of future Dominican batting stars who arrived on the scene at the Sosúa Baseball Field: batting cages in hand.

This is the story of Russ Wieser and his own personal field of dreams found in the heart of the people of the Dominican Republic.

After 25 years as a repossession agent and an ultra-brief stint in the mortgage loan servicing industry – but no background in baseball, Wieser and his girlfriend were looking to making a move to Europe. But Russ wanted to stay closer to the USA.

During a brief stop at Las Terrenas on a previous sailboat journey, Wieser fell in love with the DR and suggested to his girlfriend that they give it a try before going off to Europe.

Knowing only that Dominicans love baseball and after a Google search revealed that very few if any batting cages existed in the DR, Wieser informed his boss at CitiFinancial he was moving to DR and was going to open a batting cage.

Improbably, the former repo man found a way to transition from a job of taking to a life of giving. Three months after the job at CitiFinancial had closed down, Wieser and his girlfriend moved to Sosúa sight unseen, knowing only that it had a great beach or two.

Initially, they had planned to stay 90 days in DR before heading off to Europe for another 90 days with a possible return to the DR if they found they liked it. Wieser fell in love with the place and decided Europe would have to wait.

He then began forming a plan for the batting cage idea. Nothing existed on the local market for pitching machines. So he bought them in the states and had them shipped in.

Customs slapped a 112%tax on the machines but Wieser managed to open The Pitch batting cage for business 1 October 2017. Each session was 25 pesos. The kids all wanted to play of course but very few had any money. Six months later Wieser initiated the sponsor program. Local businesses could hang a sign on the wall for 1000 pesos per month and The Pitch would allow all the kids to play free. The Pitch currently has 6 sponsors. 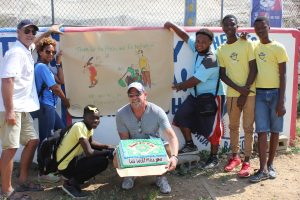 Russ Wieser, Hugh Baver, and the guys and gal from Inspire.

Even though The Pitch barely covers costs, Wieser still allows all the kids to play for free. He just can’t say no to the kids. So Wieser came up with a rather innovative and beneficial way for the kids with no money to earn batting sessions. His request was that each prospective batter picks up a bag’s worth of litter and trash from the field. The kids soon saw the advantages of a clean field and the trash pickup quickly became an ongoing ritual and habit in which everyone continues to participate.

Last year The Pitch gave over $15,000 USD in shoes, gloves, bats, and balls to the kids via donors. Before Wieser came to town the equipment was often being hijacked and sold by street sharks. The group was able to put a stop to that. Already this year over $10,000 USD of equipment has been supplied to players with an expected $20,000 USD total by the end of 2019. 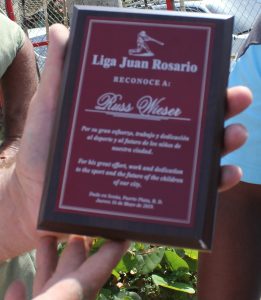 “Liga Juan Rosario recognizes Russ Wieser for his great effort, work, and dedication in the sport and the future of the children in our city.”

One of the local leagues to benefit most is Liga Juan Rosario.

Wieser’s lead guy at the cage is coach Melvin Castillo or “Bodega” as everyone calls him. Bodega has been working with Wieser since the day The Pitch opened in October 2017. Bodega also coaches the youngest players in the local league.

Wieser asked for no official permission when he opened. He just grabbed a shovel and started clearing out the space for the batting cage. There was a lot of hazardous rubble, garbage, and sharp metal refuse that needed to be cleared just for the safety of the kids.

When customs held up the machines to extract yet more tolls in September 2017, undaunted, Wieser just pitched the old fashioned way: by hand.

He plans to open more locations as money allows and is currently working with Sosua75’s Hugh Baver to see if they can start an Adopt a Liga with leagues in the US and Canada to generate more equipment donations for the Dominican Ligas.

He would also love to have a portable cage that could go directly to towns across the DR frame, net, machine, net & generator with a coach. Plus equipment donations when available. Such a contraption would cost about $10,000 USD plus the vehicle to haul it.

100% of donations are used to provide for the kids. Wieser makes zero.

What was initially to be ninety days has now suddenly become one and a half years. Honoring the deal with his girlfriend Wieser is soon headed to Europe. The European jaunt is only supposed to be for ninety days as well but so was the Sosúa adventure. The best-laid plans… etc. etc. Life is like that more often than not. 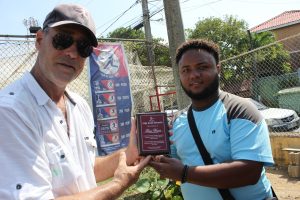 On May 15th Melvin Castillo “Bodega” was made a partner in The Pitch so that while Wieser is away he has more motivation to continue their good work and keep things working properly as he will no longer be on a payroll but commission – a well-deserved promotion. Sosua75’s Hugh Baver will also be involved: likely taking over for Wieser until he returns… whenever that may be. Hugh’s ex-pro baseball background will serve him and the kids well. Between Bodega and Baver The Pitch is in good hands. 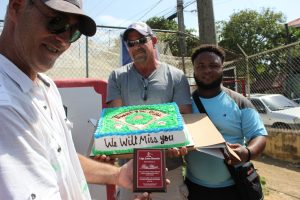 I attended Russ Wieser’s farewell ceremony at the baseball field. The love and appreciation for Wieser’s efforts, guidance, and generosity were clearly visible in the little sad-eyed but enthusiastic faces of the kids and many a muchas gracias could be discerned amid the clatter of background chatter and road noise. 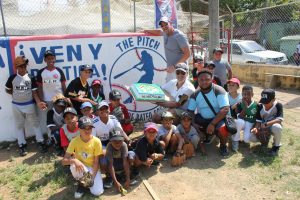 Thank Russ for The Pitch. 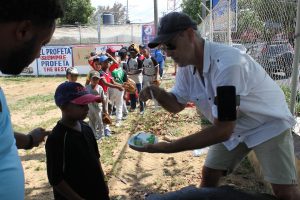 Russ hands out farewell cake and water to a team sad to see him go.

Wieser’s not one for drawing attention to himself, boasting or complaining. So very few people know his story. Fewer still know how much he personally sacrificed to help the kids. He has no vehicle, he had no free time, and he barely has the money to make his next move because every cent and peso he had or made he put right back into The Pitch so the kids would have the equipment and attention to hone the skills needed to achieve their dreams. 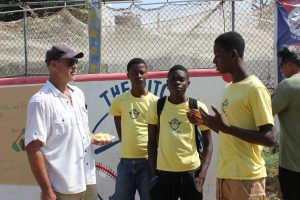 An inspirational speech of appreciation from the guys of Inspire. 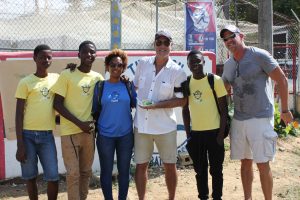 Inspire with Russ and Hugh

I would not have known Wieser’s story either had it not been for Hugh Baver’s bringing it to my attention. 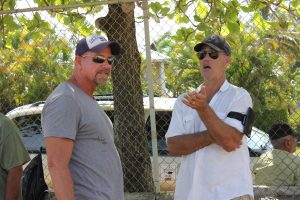 Wieser discussing finer points of The Pitch with pitcher Baver

I’m glad he did. There are way too many unsung heroes and Wieser’s one of ‘em. Everyone understands how good it is for kids to have a healthy activity in which to participate. How life-changing it can be to have a dream in which to aspire. The batting cage in a field of dreams. He built it and they did come.

We wish Wieser and his lady the best of luck on their European odyssey and hope that they will return before too long. Towns and communities need good, selfless people such as these.

When the next kid makes it from Sosúa to an American Major League Baseball team we’ll know who to thank. 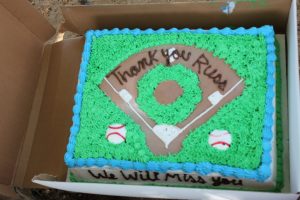 It hurts to leave but it’s nice to know you made a difference and how much you are loved and will be missed. Could one ask more from life?