Parade of memories for Sosua75 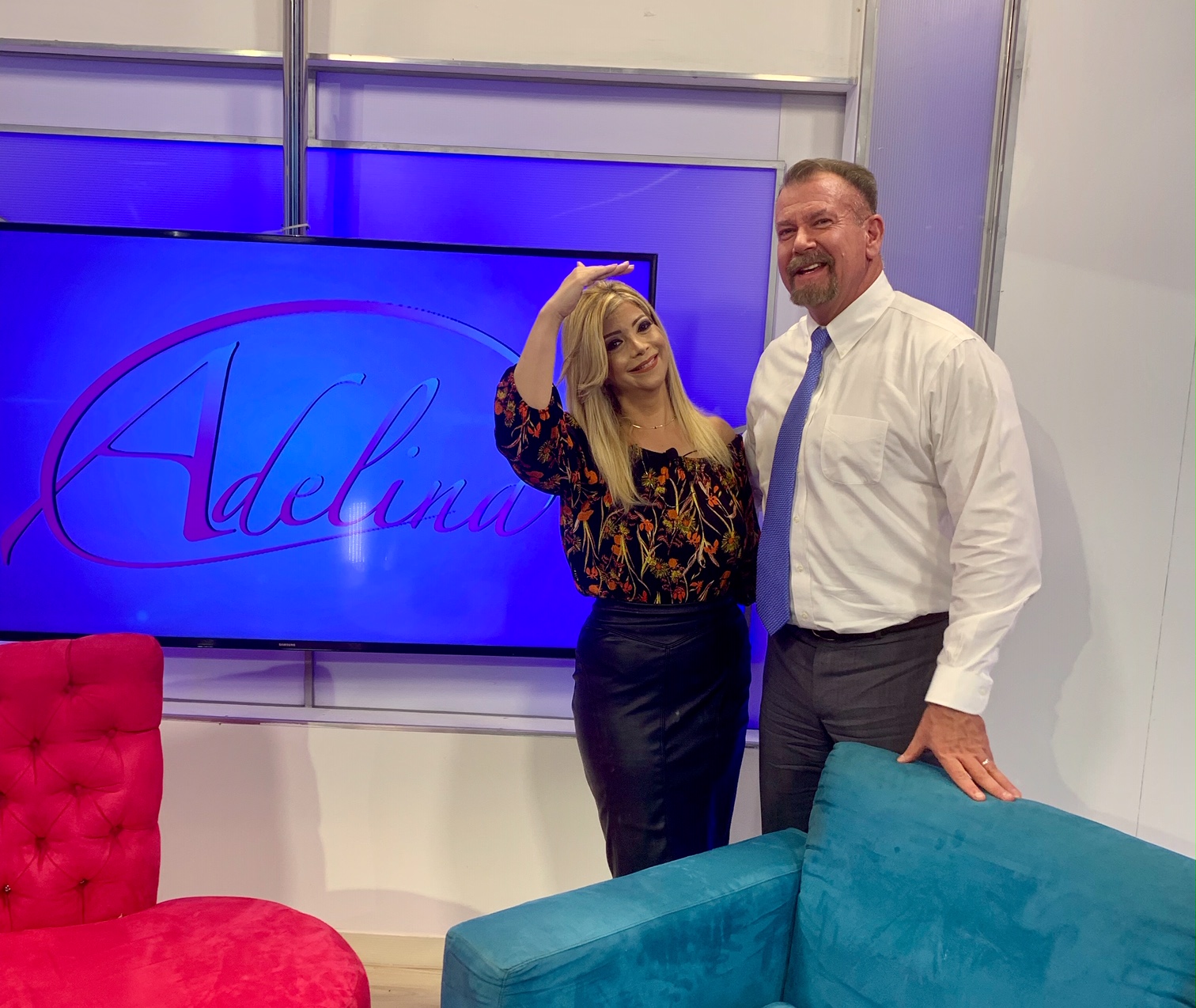 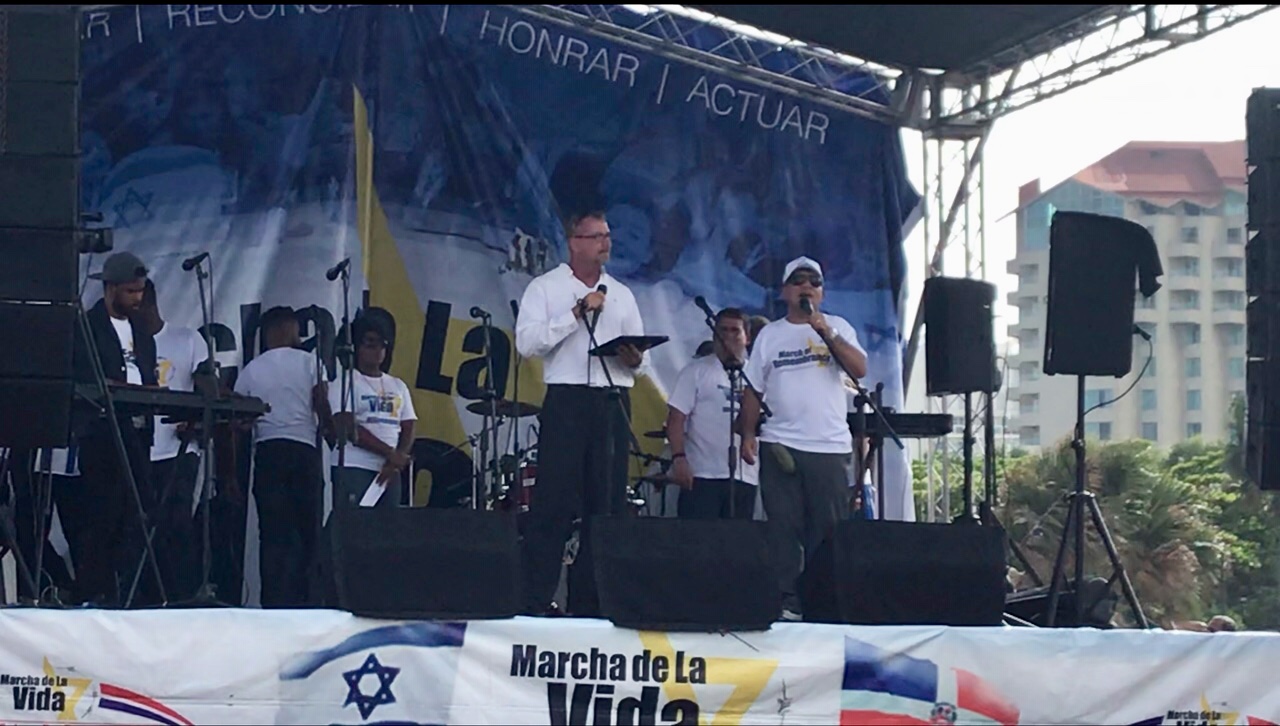 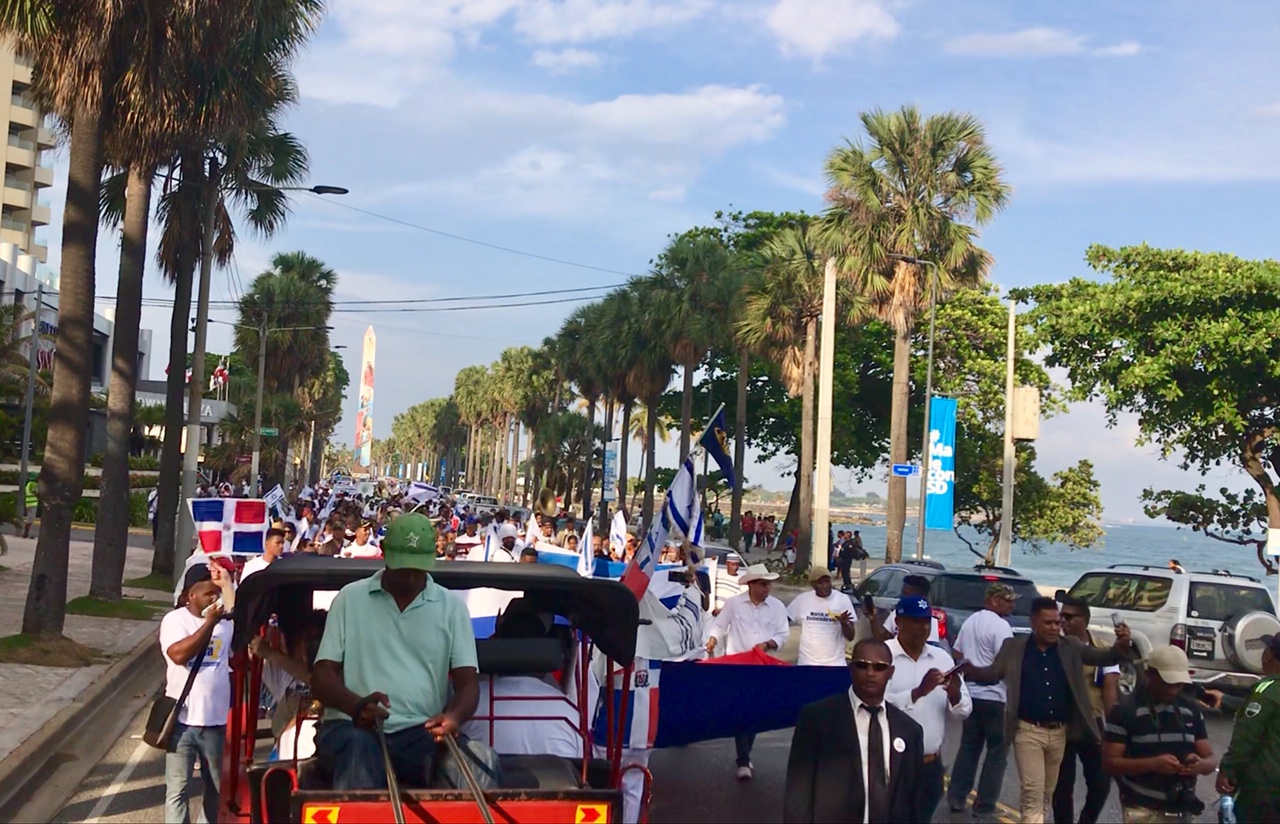 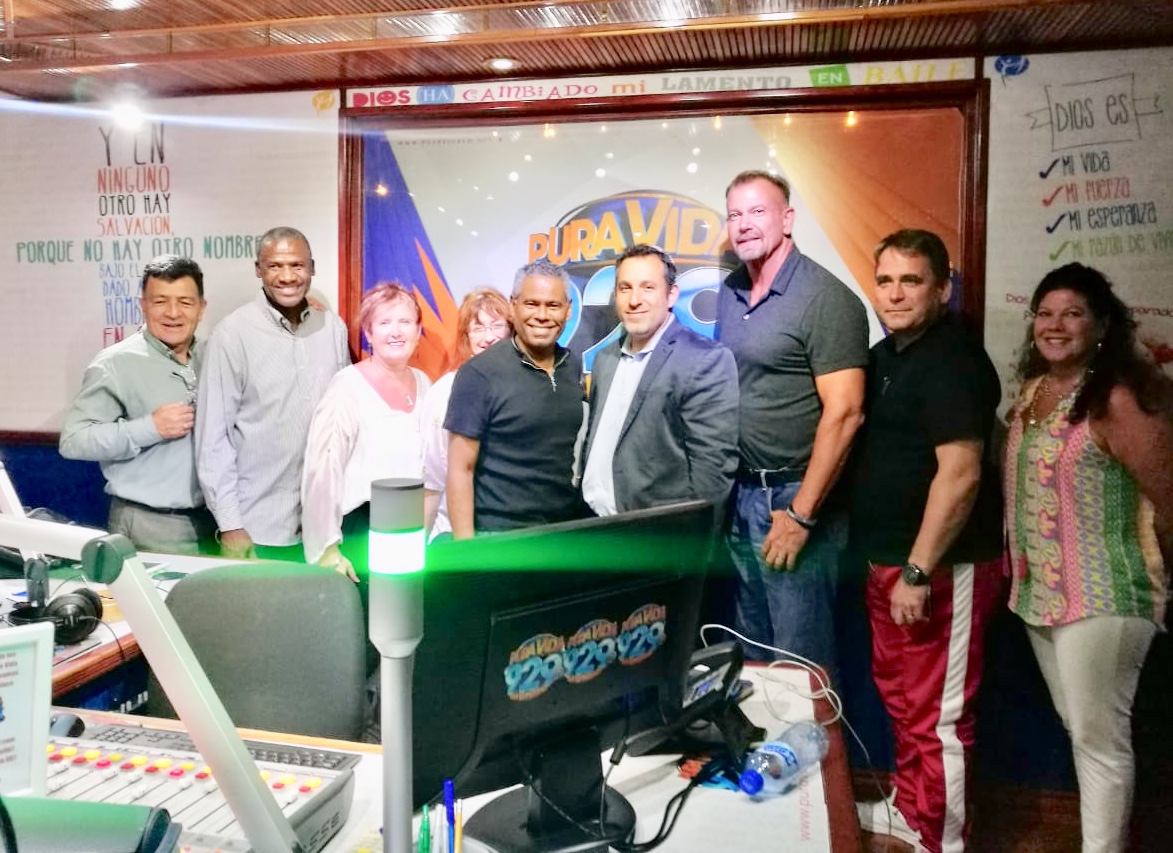 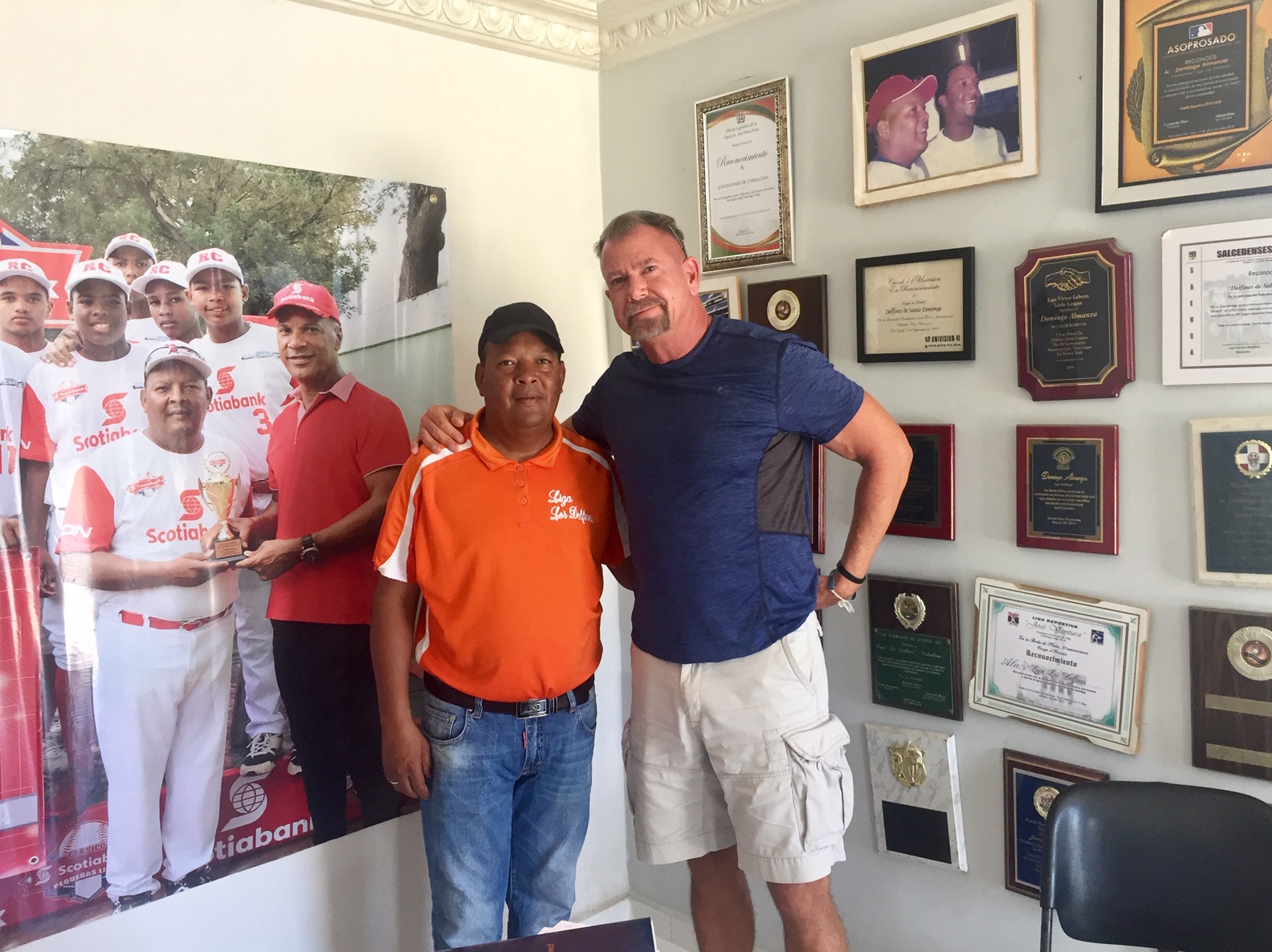 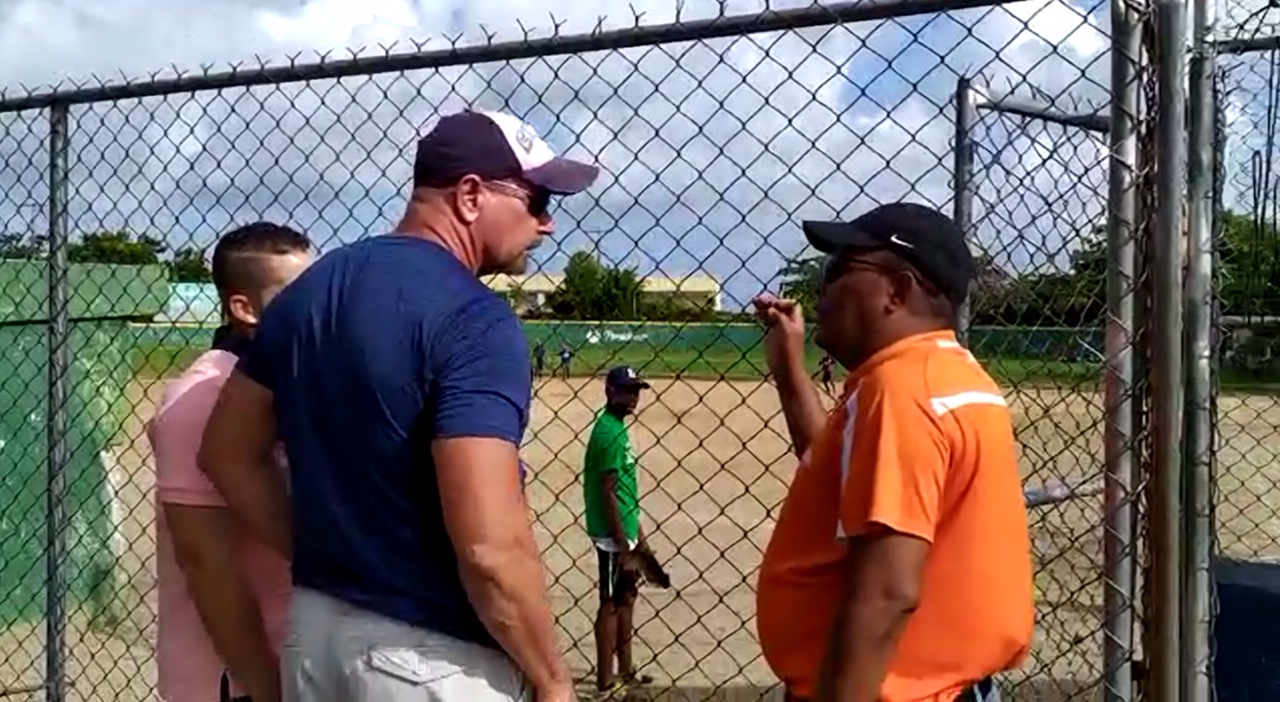 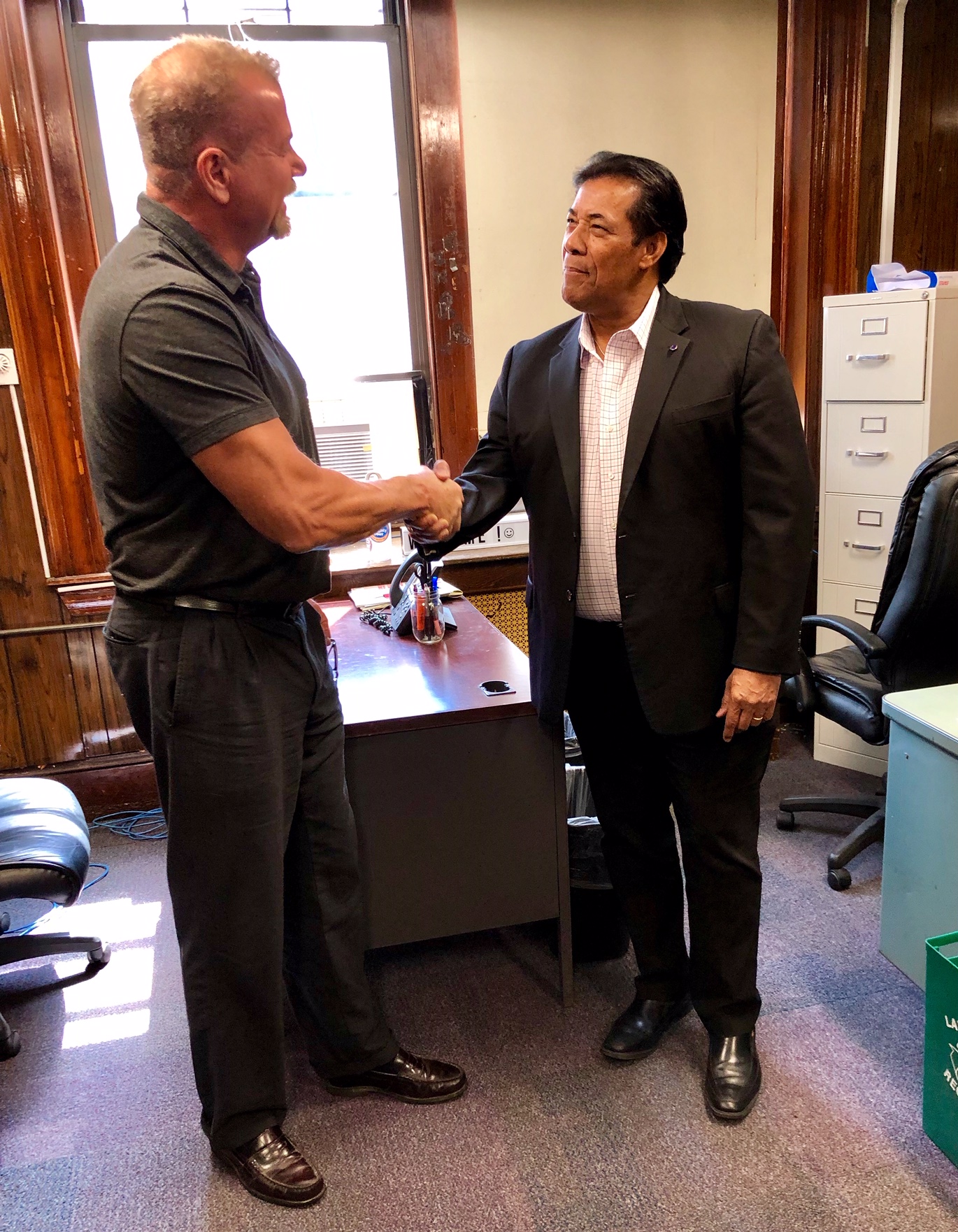 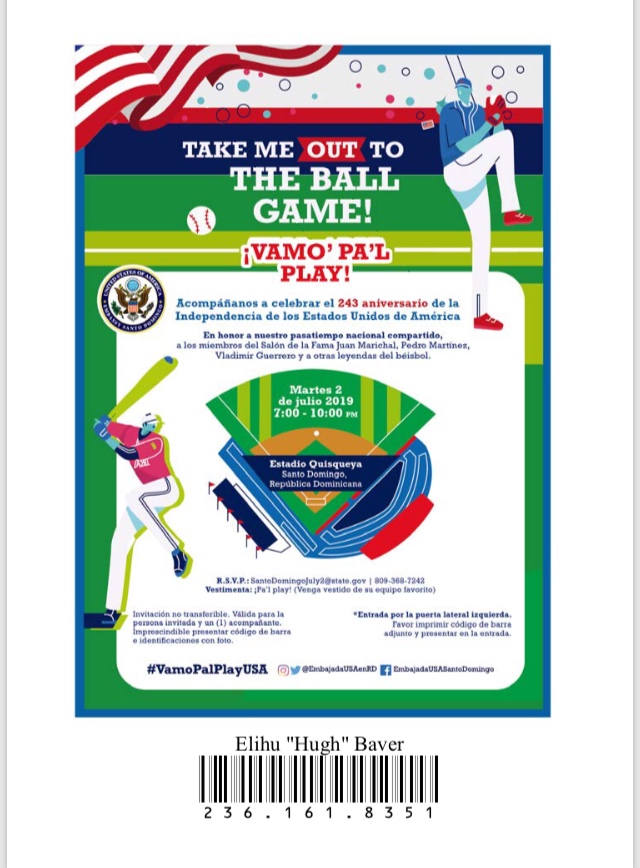 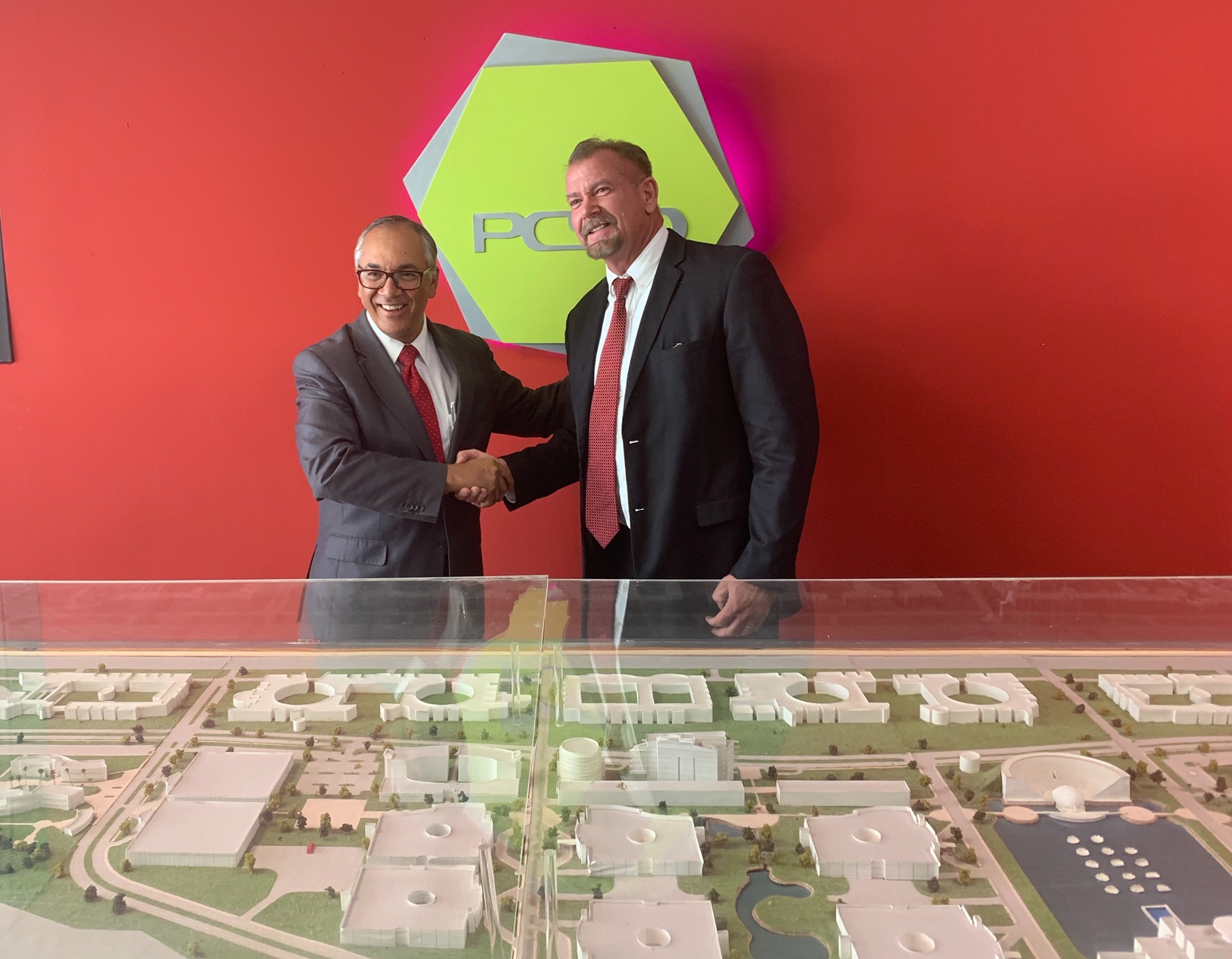 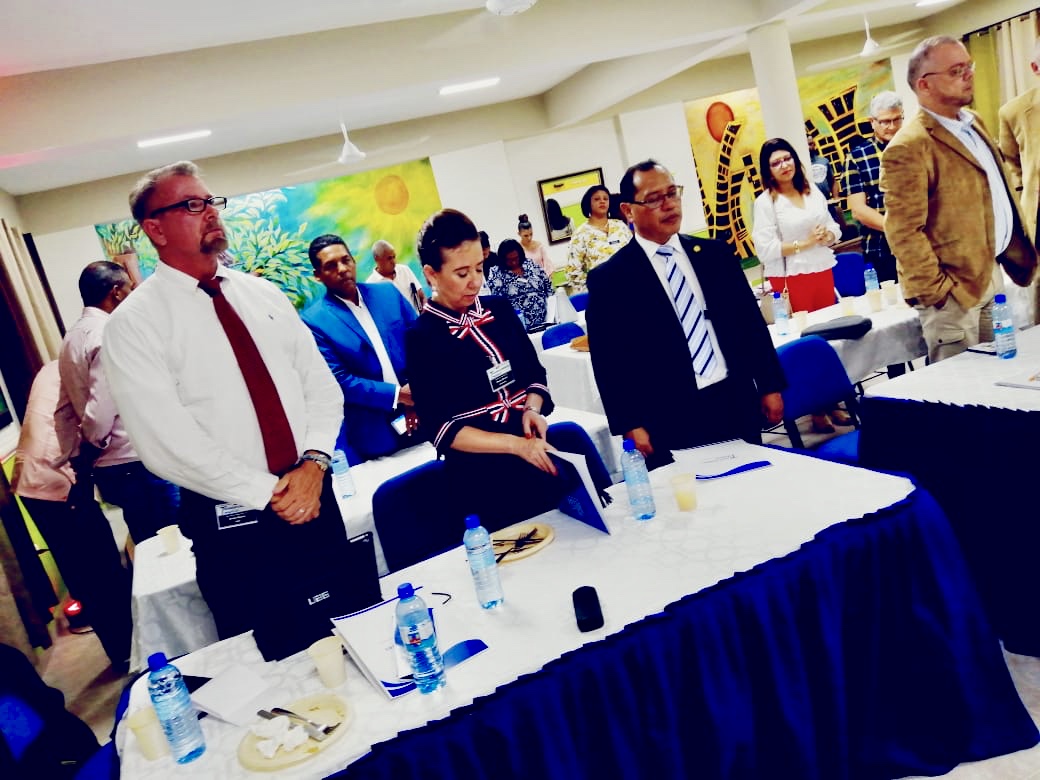 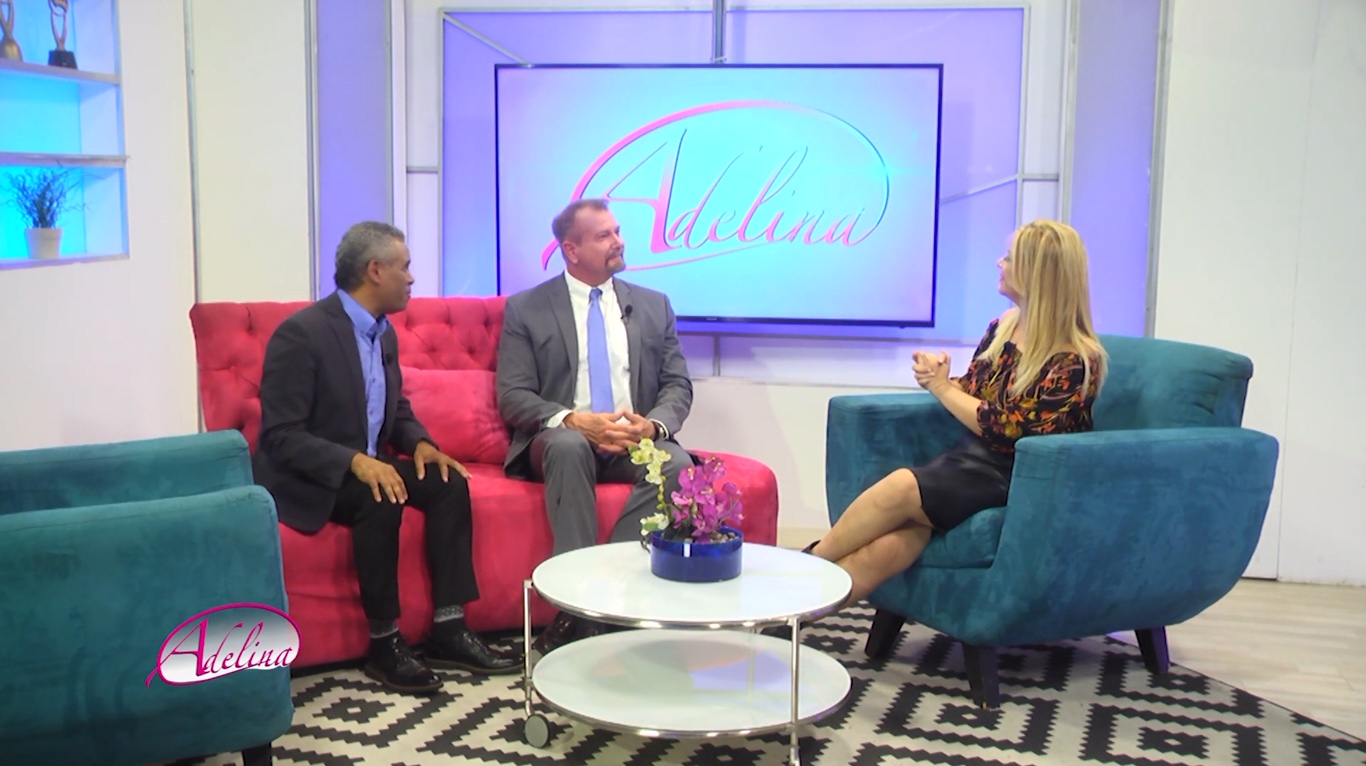 Chapter 9 of Interviews with Hugh Baver

Continuing from our last chapter, as April and “Spring” arrived on the North Coast, Hugh Baver’s social calendar and public appearance requests to speak about the Évian to Sosua connection and on behalf of Sosua’s historical roots were continuing to grow.

Baver befriended Rabbi Itzhak Shapira and his Ahavat Ammi Ministry followers from their earlier March trip to Sosua. So it felt like a natural fit to continue the new relationship and involve himself in as many other opportunities as possible with the vibrant and globally recognized group. Remember it was Shapira who helped Baver finally gain entrance to Mayor Neumann’s office and attempt to facilitate some modicum of recognition by including him in the interview and ceremony he had planned with her.

By April’s end, another incredible opportunity presented itself as the Ministry invited Baver to take part as one of the annual “March of Life” parade keynote speakers. Asked to give on behalf of the Sosua Jewish community and its unique “game-changing” history, the “March of Life” event recognizes the Holocaust tragedy, honoring and commemorating the millions of lives lost, and supports the State of Israel.

The 2019 program was held on a beautiful sunny day at Plaza Juan Baron in Santo Domingo. After the formal program concluded, a parade of approximately 4000 enthusiastic supporters followed down Avenida George Washington or “El Malecon.”

Sharing the stage and joining forces with the likes of the dynamic Shapira and Bishop Mauro Vargas, who has overarching responsibility for 1500 churches and is second in command to Dominican presidential advisor Bishop Elvis Medina was an incredible experience for Hugh Baver. 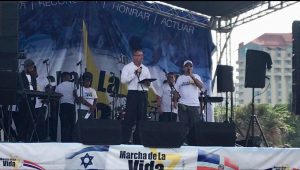 Presenting at the March of Life rally on the importance of Sosua’s history providing a safe haven for displaced and persecuted European Jewish refugees following the 1938 Évian Conference.

Having a front-row seat and being included as a key contributor at this most significant program event, complete with opening musical performances and fanfare from all branches of the Dominican military band, was an honor of a lifetime for Baver. He was able to capture this spirited video footage of both the Dominican: https://www.dropbox.com/s/2ql5y9o9csdxml6/MOL%20April%2028%202019%20Dominican%20National%20Anthem.mov?dl=0 and Israeli: https://www.dropbox.com/s/v2e7w2nua5ig7tz/MOL%20April%2028%202019%20Israeli%20National%20Anthem.mov?dl=0 National anthems being played at the onset of the event. 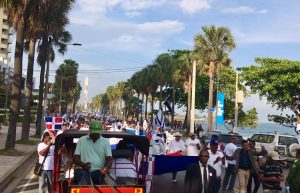 View from the lead horse-drawn carriage at March of Life Parade at “El Malecon.”

On the evening before the March of Life event, Baver and his new Rabbi friend took a few minutes to stop at an inner-city baseball field. After an enthusiastic invitation for all to attend the March of Life rally, Rabbi Shapira tried his hand at standing in the batter’s box and swinging a baseball bat for the very first time in his life. After addressing the group of youth baseball players and a brief batting instructional from Baver, eventually getting a pitch or two to his liking, Shapira solidly connected with a ball and hit it out to rightfield.

Baver confided, “If anyone had told me years ago that I would be teaching a Rabbi how to hit a baseball for the very first time at a youth baseball field in the Dominican Republic, I never would have believed it!” 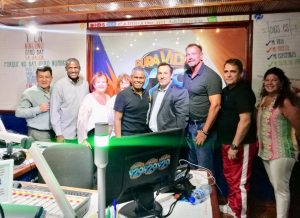 Thrilled at being extended the privilege of invitations like the March of Life, in April of 2019, Baver was contacted to be the keynote speaker at another “Yom Hashoah” (Holocaust Commemoration) program in Nashua, New Hampshire, his home state. Within 3 days and over 1700 miles apart from Santo Domingo, Baver, via a televideo conference, presented the Évian to Sosúa Holocaust redemption story to a large assembled group of Holocaust Commemoration observers at Rivier University in New Hampshire.

Surprisingly, during the ending Q&A session, one of the attendees, a Dominican Jewish couple, expressed their appreciation for Baver having made it his priority to tell these little known Holocaust episodes. After an arduous but satisfying few days and feeling gratified that his Sosua75 efforts were genuinely making a difference, Hugh enjoyed the solitude and peacefulness of a late-night walk, staring at the stars on Cabarete Beach.

Transitioning again back to baseball, in early June, Baver traveled via Metro Bus from Sosua to the Capital again to reunite with Pedro Martinez’s former boyhood teammate “Punga” Almanzar. Baver had met Almanzar 4 years earlier at the 2015 Future Hall of Famer’s Amateur Baseball Classic tournament he had organized, and “Punga” was the manager of the team coming from Manoguayabo, DR, Pedro’s birthplace.

Following a tour of the Manoguayabo field and Punga’s impressive on-site office, which was littered with dozens of tournament trophies and awards, Almanzar invited Baver and his close friend Pastor Juan Santos back to his home in town for a traditional dinner of delicious home-cooked roasted chicken, rice, and beans. Sitting on Punga’s balcony, the two reminisced about the 2015 tournament and the experience of his team having won it. 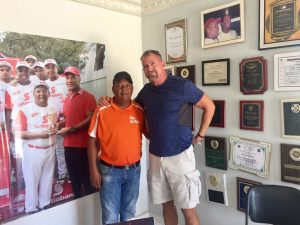 In Punga Almanzar‘s Office at his field in Manoguayabo with photo of he and Pedro on the top row. 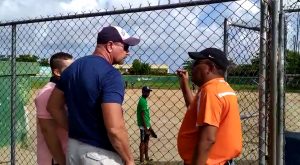 Next on Baver’s early summer agenda was traveling back to New England to visit friends and family. While back in the Boston area, Hugh planned a day trip down to Lawrence, Massachusetts, and to the municipal offices of the honorable Lawrence Congressman Marcos Devers. Lawrence is the home to one of the largest Dominican communities in the Northeast (and in the entire US), and Devers is the long-standing representative of that Congressional district.

Devers was the gentleman who presented Baver with the Massachusetts Congressional Citation for his 2015 work directing the formation of the inaugural “Future Hall of Famers” tournament. One of Baver’s objectives of this reunion meeting was to establish a formal connection with the Lawrence community, led by Devers, to the baseball youth of Sosua and “The Pitch” batting cage program which he co-manages here.

Part of the local program entails the distribution of used baseball equipment collected from Boston area Little Leagues, shipping them down to the DR, then distributing them to underprivileged youth players in at-risk neighborhoods and communities throughout the Dominican Republic.

Link to “The Pitch” here: https://www.globalgiving.org/projects/the-pitch-batting-cage-in-sosua/ 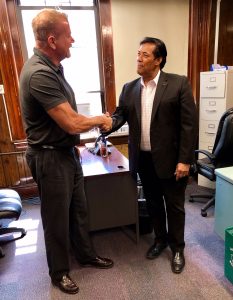 Re-acquainting with Lawrence, MA Congressman Marcos Devers in his office.

Unfortunately, while visiting the Boston area last summer, the one event Baver regrettably needed to miss but had an intense interest to attend was an exclusive invitation from US Dominican Ambassador Robin Bernstein. Bernstein invited Baver to join her, Pedro Martinez, and other famous Dominican ballplayers and dignitaries at a special July 4th Independence Day game at Estadio Quisqueya. This summer 2020, Baver has committed to making sure he is available to attend this event. 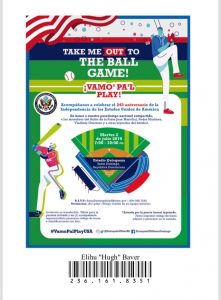 Arriving back to the North Coast from New England and getting his first taste of a hot and humid Dominican summer, Baver took advantage of his air-conditioned Cabarete office to devote his energies and correspondence towards solidifying the 3rd “Revisiting Évian” program.

It was a program he had planned for last summer.

Following up on the two successful events held in 2018 and once again slated to be held at the historic Hotel Royal in Évian France, last year’s event entitled the “Évian III Student Educational Leadership Conference” sought to bring together college-aged student leaders from leading Jewish and Human Rights organizations. These leaders also hailed from the same 32 countries who participated in the original 1938 Conference.

Designated as “student diplomats,” the objective of the Conference is to utilize the historical backdrop of the first Conference, convened in the same Hotel chamber, to provide specialized training by distinguished global educators to “educate the next generation of global leaders.”

Bringing to light the parallels of the complacency of the 1930’s—including the unprecedented rise in global AntiSemitism—we are witnessing today, as well as highlighting the contemporary challenges of immigration and refugees, “building bridges and not walls,” the 3 day Conference featured planned keynote speeches by Elan Carr, US Special Envoy for Monitoring and Combatting AntiSemitism, Michal Chojak, Deputy Director of Field Research from Yahad-In-UNUM, Thomas Keneally from Schindlers List fame, and US Ambassadors from France, the Dominican Republic, among others.

Mid August once again found Baver traveling South to the Capital for more meetings with influential and resourceful Dominican business, religious, and sports leaders. Through an introduction from a new Cabarete friend, Hugh met with Eddy Manzueta, a prominent businessman, tech visionary and Founder and President of PCSD, (Parque Cibernetico Santo Domingo).

At the meeting held in Mr. Manzueta’s office, Baver was overjoyed to learn of Mr. Manzueta’s interest in the history and contemporary relevance of the Evian Conference. In contrast, Baver, in turn, learned firsthand of the continuing future vision and business hub expansion plans set forth by Manzueta and his team. With Parque Cibernetico’s noble mission of “Technology serving the country and the World,” the large business complex also hosts a satellite campus of ITLA (Instituto Tecnologico de las Americas). 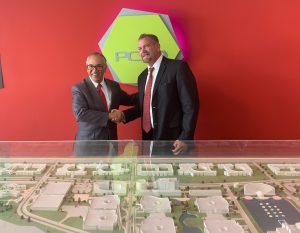 With Eddy Manzueta at the front entrance to PCSD

That same evening Baver was asked to present his Sosua75 NPO to a gathering of Santo Domingo business leaders at “Transformers World.” Conceived in 2012 by Pastor Juan Santos of Los Palmares Church in Santo Domingo and centering around the 5 Value Pillars of Integrity: Character, Excellence, Service, and Humility, Santos’ vision was to establish a network of influential generational leaders​ ​to help others achieve goals which one can not accomplish by themselves.

The event included presentations and testimonies from the Guatemalan Dominican Ambassador and his wife as well as Diego Ortiz, President of a popular Venezuelan radio station “Vida Vision” Radio, and “Adelina,” Vice President of Grupo SuperCanal and the President of one of the TV channels Senal de Vida in Santo Domingo. 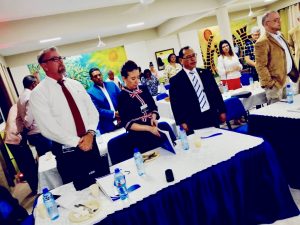 As one thing leads to another, stemming from the Transformers World Conference and help from Pastor Juan Santos, after listening to Baver’s opening TWC presentation popular Santo Domingo TV Talk Show Adelina took an interest in Baver’s Sosua75 journey. She invited him to appear on her “Adelina” TV show last September.

As delightful and engaging as Adelina looks in these photos, she was extraordinarily gracious and eager in her attempt to provide further exposure for Baver’s NPO and get the word out on the Évian—Sosua connection. She also highlighted “The Pitch” baseball program, and his overall desire to help the Dominican Republic through the development of innovative family-friendly tourist projects inspired and implemented by an American citizen rather than the Dominican government. 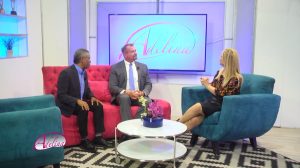 Rounding out the month, September ended on a quiet note celebrating the Jewish High Holidays with all the customary traditions and with his wife in their Cabarete home.

Next edition, October through December, Évian III, and an exciting 2019 comes to a close…