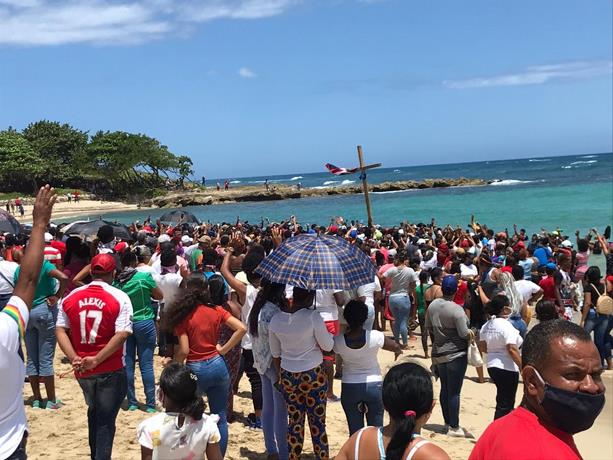 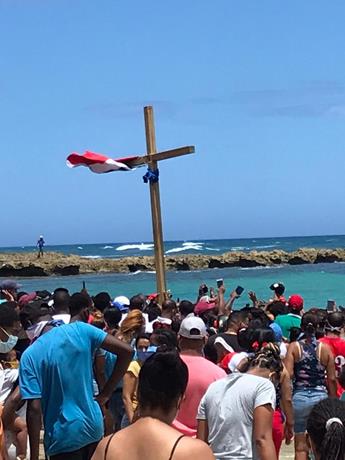 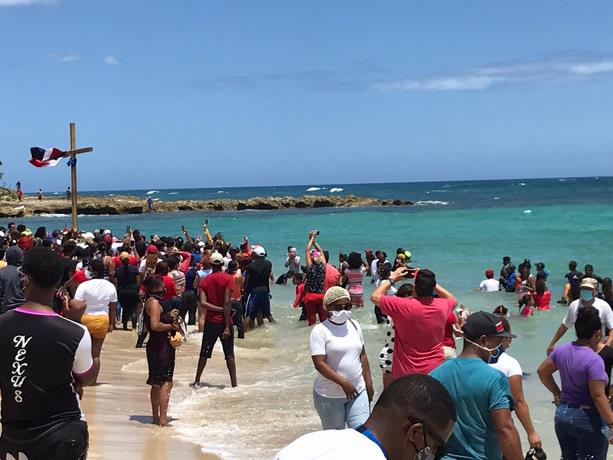 Defying the rules of social distancing, which seek to reduce contagions by COVID-19, hundreds of people accompanied the Pilgrim of Villa Altagracia to carry a cross on the beach of the boardwalk in this city, under a burning sun proclaiming that starting Monday the disease will begin to disappear from the country.

Men, women, and children raised their hands and sang the song “Peace in the Storm,” which resonated on a light disco that accompanied them to the last stretch of the route, about 18 kilometers approximately from Maimon to the beach popularly known as the “Playa de Camacho,” in the upper part of this city.

During the walk, the provisions were taken, so that at least three units of the National Police, members of a private security company that regularly provides free services to cultural and religious events, an ambulance, in case of any inconvenience or mishaps, protected the participants.

While the traffic in that section of the boardwalk was made difficult by the crowds of people who walked on foot, as well as in passolas and motors.

On the boardwalk, people with images of saints and rosaries prayed and raised their hands while the pilgrim prayed in the water, without being able to even hear his prayers since he did not have a microphone where he was. Some of the people directly in the water, others in the sand, and another group watching from the wall of the boardwalk watched the action.

Holding on to the faith is for the most faithful, and is a waste of ignorance and recklessness for the most skeptical, this group of people clung to the cross with a Dominican flag on top to cry out for the disappearance of the pandemic that has already caused more than 200,000 deaths in the world and 278 in the country, according to official figures.

“So I asked God that as a mime he told me what was going to happen in 2020, to tell me that he could tell humanity and the Dominican country now, thus having the signs and closeness to God to take a very heavy cross and to deposit it on the waters of the Puerto Plata sea, so that our country would be freed from the disease and many countries in the world,” proclaimed Mildomio Adames yesterday in Maimon, as part of his journey that began in his native Villa Altagracia and that on several occasions he has done the same at Easter for different reasons.