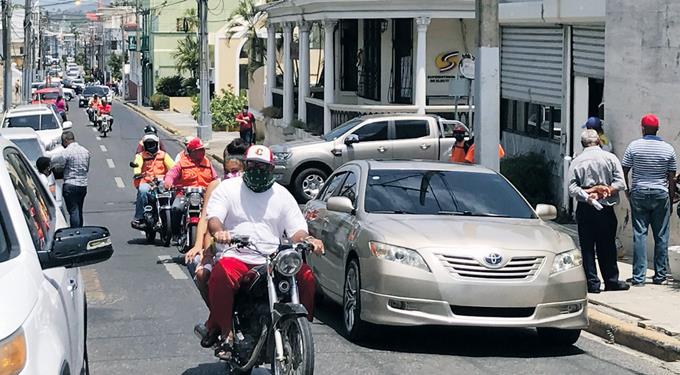 The confinement arranged by the Government in Puerto Plata is only fulfilled in view of the impact of the supervision of access at the east and west entrances of the city.

The confinement arranged by the government in this province, as a result of the massive concentration of people following the visit of the pilgrim of Villa Altagracia, Migdomio Adames, is carried out without a greater impact than the supervision of access at the east and west entrances of the city.

The movement of people and vehicles is carried out normally and this Friday there were ostensibly long lines of people to access the banks, supermarkets, and establishments that are operating here.

In the Banreservas main office, the line covered the entire Padre Castellanos street and a section of the Beller, after the intervention of police units and the Joint Task Force to avoid excessive crowds in front of a large number of clients of the bank branch.

On Beller Street itself, clients of Banco del Progreso, although in smaller numbers, lined up on the opposite sidewalk, seeking to protect themselves from the harsh sun and prevailing high temperatures.

Since the beginning of the quarantine, the businesses most impacted by the prohibition to open their doors are those related to tourism, restaurants, gift shops, and other establishments, with their doors closed, and the Plaza Independencia, usually full of tourists, completely desolate, to the extent that in full activity the city hall was the only space for mobility around the plaza. Some taxi units of the tourist union, which have seen their activities diminish, transport local clients who are currently requesting their services.

Some tour guides also wander around the square, so as not to lose the habit of being in their usual place of work. No vendors of water, coconuts, or hats for visitors are observed.

Along the streets, like Separación, it is devastating to see the row of closed businesses that abound in one of the main commercial arteries of the city.

Businesses closed due to noncompliance

Last Thursday’s session was one of the most intense for the Police and Joint Task Force units. Ten businesses were provisionally closed when it was found that they did not comply with the social distancing rules imposed by the health authorities. Grocery stores, colmados (local small markets), and other establishments were also closed, during the operation in which the most visible was the very busy Las Margaritas store, at the intersection between the calls Beller and San Felipe, in the same historical center of the city, the store that sells everything from cosmetics, groceries, and plastics, has little interior aisle space, and customers often accumulate with less than a half-meter distance from each other.

The main supermarkets in the city, the two establishments of the José Luis Supermarket, La Sirena and Jumbo, maintain a fairly normal stock of groceries and other items, but in some cases, it is evident how at certain times there are scarce items, milk without lactose, wheat flour, regular yogurt in one-liter containers, prepackaged meats, are currently not on the shelves, certain usual brands of salamis, corn flakes, or imported butter, etc. One day they are there and another not.

While in the streets adjacent to the municipal market, vendors of groceries and vegetables from the vans or on the sidewalks offer their products to customers from before 6 in the morning until close to two in the afternoon when they pick up their merchandise.

In recent days, trucks selling bananas, pumpkins, watermelons, pineapples, and other products have proliferated, located on busy streets to offer their products to passers-by.

At the eastern entrance to the city next to the number two entrance to Playa Dorada, one-to-one checks are carried out on vehicles entering or leaving the city, in a friendly way, the police and military personnel stationed at the site inquire of the drivers their destinations, they ensure that there are no excess passengers and those motorcycle riders are properly equipped with a protective helmet and that they justify the reason why they are transiting from one place to another.

Lieutenant Fabián explained to this reporter that in compliance with the instructions of the superiors, there is kindly advisement to ensure that only those people who, due to work commitments, have to drive. Trucks and other goods transport vehicles to markets and other establishments and people who go to medical check-ups, mainly constitute this group.

In the Malecon the activity has been drastically reduced equally, restaurants, bars and the traditional booths in the upper part are closed, in the morning some people are seen walking, running or cycling, the majority with masks in place or half in place and people who come out to sit and talk in the fresh air sitting at a safe distance.

From 4 o’clock p.m. is when the city really begins to feel the real respite, the circulation of vehicles drastically decreases, the motoconchos disappear and in general, the most active streets slow as the clock edges toward 5 p.m. when the movement of people, motorbikes, and other vehicles becomes almost non-existent.