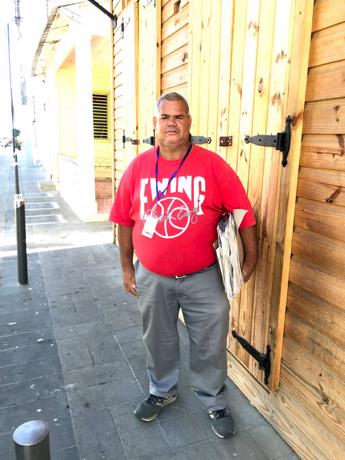 The rhythm of his steps has shortened with time, and the accumulation of pounds drags a bit with the years. Still, the distinctive cry is the same, and everyone knows in the downtown streets of Puerto Plata that the voice that shouts “Liistíiin Diaaario!” is that of Antonio Rolando Fabián.

Few know him by Antonio or Rolando and many by “El Bionico,” some less by “El Pesao,” the nicknames with which people have baptized him throughout his life selling newspapers.

Although he was born in San Francisco de Macorís, where his mother is from, he has spent most of his life in Puerto Plata, his father’s birthplace, almost all of it dedicated to a job that seems to be on the verge of extinction: that of the town crier or “canillita” who travels the streets selling newspapers.

For nearly 37 years, Fabian had walked and wandered the streets of downtown Puerto Plata, announcing the arrival of printed newspapers, when as a young boy, he became interested in doing this work to earn some money, with which to help himself and his family. The limits have been imposed by himself, the Malecon, 27 de Febrero Street upwards, and the rest of the downtown area.

It all started when he saw boys his age selling newspapers, and it occurred to him that he could do the same to earn money. Then a friend put him in contact with journalist Felix Sosa Lantigua, who in addition to being a correspondent, was responsible for the distribution of the now-defunct evening paper La Noticia, who allowed him to sell that paper, later incorporating the also defunct Última Hora, El Nacional, Listin Diario, and Hoy.

In Listín, he started selling only the magazine editions. He remembers that Don Miguel Abbot, the newspaper’s representative for many years here, allowed him to start “at the time of the Escala magazine,” where he was incorporated and went on to sell the newspaper daily, sometimes selling up to 300 and 320 copies in a day, combining the editions of Listín, Hoy and El Nacional. Currently, the combined sales of these media, which he achieves as a town crier, barely reach 90 copies, subscribers receive their newspapers directly, others look for news on the Internet, and fewer and fewer buy from the town crier.

At 53 years of age, “El Bionico” is walking more slowly due to some falls he has taken over the years, but while he carries out his work, whether it is rainy or sunny days, his newspapers always arrive.

Health
Although he has always been in good health, Fabian recently faced problems with a case of erysipelas (St. Anthony’s fire) that forced him to stay at home for nine days, one of the few times he has not been able to go out to do his work.

His greatest aspiration
The great aspiration of Antonio Rolando is to be able to have a house, to guarantee a decent life with his sister, with whom he currently lives in a rented house in 4th street of the Cristo Rey sector, whom he helps modestly with the expenses, according to his possibilities, since his work does not generate much income at present. And even less now when the sale of newspapers in Puerto Plata is on the decrease.

THE ONLY ONE
One son.
Fabian has a 24-year-old son; his eyes glaze over as he admits that he doesn’t see him much and wishes he could have helped him more financially.

Antonio Rolando Fabian is currently the only street vendor who walks the streets of Puerto Plata.