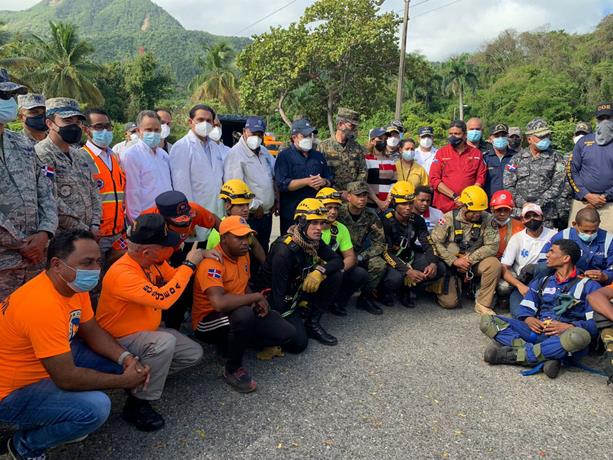 The team that participated in the rescue work of the people who were trapped in two cabins of the Puerto Plata Cable Car. The causes of the failure are still under investigation. EDGAR LANTIGUA / LISTÍN DIARIO

Both the Patronato del Teleférico de Puerto Plata and the entire rescue team that responded to the emergency highlight as a lesson the joint work to save lives.

Alarm bells went off when it was learned that the Puerto Plata Cable Car cabins were stopped with 34 people inside for more than two hours.

That the lights go out or the cabins stop for 10, 20, or even 30 minutes can happen; however, two hours indicated a significant breakdown.

Upon arrival at the base, an impressive deployment of ambulances, fire trucks, military and rescue personnel, and countless onlookers made it clear that a massive effort was being made to resolve the situation of the 32 visitors and two operators held inside the two cabins, currently carrying only 16 people each due to Covid-19 restrictions.

Reports indicate that the situation was generated at 2:30 in the afternoon of Sunday, May 23. At 6:00 p.m., the emergency trolley still had not reached the place where it was; for some reason, the approach was complex, achieved around 7:00 p.m., and the rescue of the first group began.

Upon the arrival of the first rescued five children, including a baby, the anguish on the face of a rescued teenager was evident. At the same time, a medical team evaluated the people at the same terminal. If necessary, they were sent to the Bournigal Medical Center or the Brugal Clinic, Mejia, Lopez, for additional evaluations and hydration.

The anguish and concern of family members who were on the scene waiting for the outcome of those trapped in the cabins were notorious.

Juana Anaima Sosa, armed with her faith, proclaimed her confidence that her daughter would be rescued alive and without mishap after almost 7 hours trapped in the cabin located closest to the top of the mountain.

While waiting for the arrival of rescuers from the Santo Domingo Cable Car, information spread that the people trapped in the cabin refused to descend with a rope as planned, despite being the scheme rehearsed by the local rescuers.

One of those rescued said yesterday that they refused to go down without equipment because that was not the same as with the equipment with which the Santo Domingo brigade arrived after midnight, which allowed them to be lowered one by one at 2:00 am.

As photos of those rescued began to circulate, the comments also intensified in the networks: “That there were children,” as children have always been part of the public that visits the cable car on family tours. “That there were elderly people,” also at least two of the occupants were 80 years old. There must be thousands of older adults who have visited these facilities in the cable car’s operation. “Whether or not it had happened before,” the truth is that there have been short-term failures, never as prolonged as this one or requiring the rescue of the occupants of the cabins with emergency mechanisms.

While the causes of this major breakdown are being determined, it was clear that the lesson of this unprecedented day in Puerto Plata was the extraordinary dedication and detachment of the volunteer personnel of the relief agencies: Civil Defense, Red Cross, Fire Department, Amber Rescue, military personnel of the Air Force and Navy rescue units, Senpa and the Parks Department who remained on-site providing support during a rescue operation that lasted for more than 16 hours and had a happy ending.