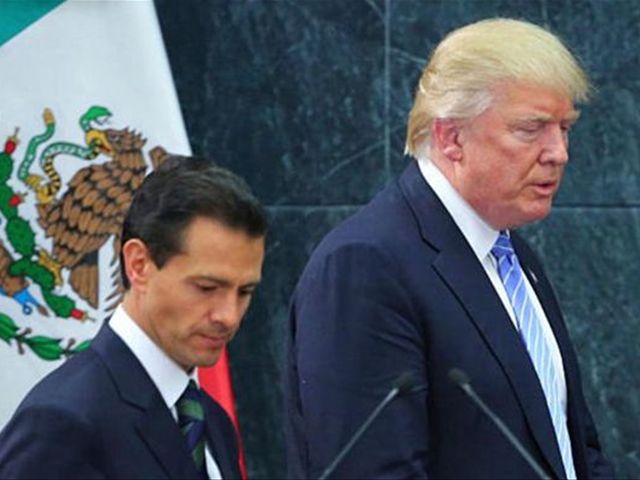 One of the few issues about which thenew President of the United States has been consistent, is his approach towardsMexico.

Ever since his extraordinary electoral campaignfirst began, he has made his intention clear. He would build a wall to stop Mexicanand other illegal migrants crossing the US’s southern border; would renegotiatethe North American Free Trade Area Agreement (NAFTA) with both Mexico andCanada; and place punitive tariffs on US and other companies using low costlabour to manufacture in Mexico for export into the US.

What is now apparent, is that asPresident, he will rapidly authorise the steps required to introduce eachmeasure, in order to demonstrate some of the main themes of his presidency.

Just days before taking office Mr Trump confirmedto the London Times and Bild Zeitung that there will be “a very substantialborder tax” on corporations that manufacture in Mexico and sell into the USpaying no tax. In other statements, he suggested that that the level at which thiswould be set would be punitive – possibly as high as 35 per cent – and thatmore generally he will introduce incentives aimed at encouraging UScorporations to repatriate capital and in some cases investments held overseas.

On the subject of border security, hetold the world’s media at a press conference in New York “we are going to builda wall. Negotiations will start immediately with Mexico, but I don’t feel likewaiting a year or a year and a half … Mexico will reimburse us, a tax, lesslikely a payment, it will happen”.

And on January 18, the Toronto’s Globeand Mail reported that Canadian officials had informed the publication thatWilbur Ross, President Trump’s nominee as Secretary of Commerce, had informedMexico and Canada that a formal request for negotiations on NAFTA will be sentwithin days of the inauguration.

These are all measures that havepolitical, economic and commercial implications for every country in theAmericas. They go far beyond the short term domestic political advantage thatMr Trump hopes for, with implications and consequences that are worrying.

By way of background, NAFTA came intoforce in January 1994 eventually eliminating almost all tariffs between the USand Mexico. The consequence, as intended, has been a dramatic increase inbilateral trade with it reaching in total US$583.6 billion in goods andservices in 2015, and the US Department of Commerce says, the creation of some1.1m US jobs. Although there is abalance of trade deficit in goods of US$58 billion in Mexico’s favour, accordingto United States Trade Representative’s office, this is partly offset by a balancein favour of the US of US$9.2 billion when it comes to trade in services.

However, since his electoral campaignbegan, President Trump’s approach has been destabilising.

It has driven down dramatically thevalue of the Mexican Peso, causing the price of goods from the US, thecountry’s second largest import market, to rise, bringing with it inflation andhigher interest rates. The consequence, as many analysts observe, will be tocause the country to fall into a recession just as elections are due in 2018.

There is already increasing internalunrest over everything from the price of gasoline to foodstuffs; implying thatthe country’s increasingly unpopular President, Enrique Peña Nieto – hisapproval ratings now stands at a record low of 12 per cent – could be succeeded by the nationalist, left-leaningpopulist, Andres Manuel Lopez Obrador, whose ratings are being buoyed by the growinganti-Trump sentiment among Mexican voters.

How Mexico responds remains to be seen,but it is not impossible to imagine a trade war involving tariffs on US goods, threatsin relation to the present high level of co-operation on the many aspects ofcross border security that are critical to the US national interest, andsubstantial consequences for US exporters.

Unfortunately, this is a scenario thatdoes not bode well for the Caribbean and Central America.

Apart from the danger of unintendedconsequences arising from bilateral policies being introduced in isolation fromany new US hemispheric economic and security strategy, what is about to happen toMexico may well create a new cause in the Americas. The most likely effect willbe to set aside the huge steps forward in hemispheric relations achieved followingPresident Obama’s 2014 decision to end the US policy of isolating Cuba, and todiminish US influence.

If as seems likely, President Trump alsoadopts a transactional approach towards Cuba, the divisions then created mightnot only see Mexico and Canada seek a larger hemispheric role, but lead otherplayers, including China and Europe, which have a mechanismfor political and economic dialogue with the countries of the Americas throughthe Community of Latin American and Caribbean States, to develop a stronger andalternative role.

Moreover, if a new bilaterally deliveredUS policy approach and reshoring were also to be applied to other neighbours, includingthe countries of the Caribbean, it would rapidly have negative consequences,becoming a disincentive to investors wishing to manufacture or assemble, or useCaribbean offshore services or financial centres to facilitate trade or otherforms of access to the US.

Last year Mr Trump appeared to indicatean interest in an economic agenda for the Americas.

In prepared remarks in Mexico City atthe end of an August 2016, after he had met with the Mexican President, he saidthat one of the goals he wishes to share will be to “keep manufacturing wealthin our hemisphere”. What he meant andwhether this reflects a yet to be developed policy, remains to be seen.

Worryingly however, his planned actionsin relation to Mexico may mark the start US isolationism and an economic chill thatspreads across the hemisphere. If it does, it will have significant consequencesfor the Caribbean, coming at a time when every government in the region, includingCuba, has recognised that only external investment can finance the drive forfuture economic growth