Should it matter who pays for Caribbean development? 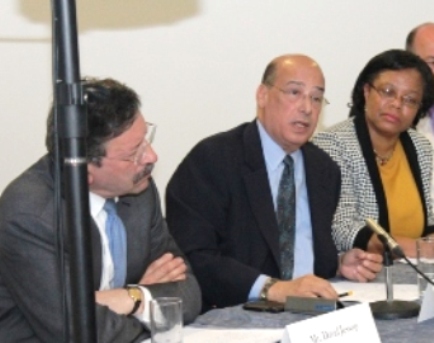 By any measure, the Caribbean’s infrastructure requirements are substantial. If the region is to be able to increase its competitiveness and give citizens the quality of life they desire, its transformation has become a matter of urgency.

In 2014, Dr Warren Smith, the then new President of the Caribbean Development Bank (CDB), indicated that to achieve this, the region would need US$30bn in the coming decade. It would need this, he said, if it was to be able to modernise its power, transportation, telecommunications, water and wastewater infrastructure. Since then it has become apparent that if the region is also to become resilient to climate change it will require an even greater resource.

Unfortunately, investment in infrastructure is now beyond the reach of almost all national capital budgets, requiring governments to either take on more debt, reach deals with external private sector entities, engage with governments outside the region, or access the increasingly limited support offered by the international development agencies.

Notwithstanding, there are signs that in some capitals the source of funding for Caribbean infrastructure is becoming less about development and more about ideology; with pressure being placed on Caribbean governments to reject proposals from China and others, on the basis that such offers of long-term finance on soft terms are intended to create political influence, strategic advantage or even dependency.

The reality is that in every nation in the region is struggling to find alternative ways to finance the renewal, expansion, modernisation or construction of hard infrastructure for schools, hospitals, roads, ports, airports, telecommunications, power plants, utilities distributions systems, and universal high-speed internet.  All also face domestic political pressure to upgrade and make sustainable soft infrastructure – the delivery of health care, education, and justice for example – in ways that better meet the needs of their societies.

Nations have responded in diverse ways.

Cuba for example has a considered long-term infrastructure development strategy. Although economically constrained when it comes to major expenditure, its central planning process has established clear objectives.

Among the many projects now moving forward are major investments to offset severe water shortages in parts of the country; programmes to diversify the country’s power generating capacity making greater use of renewables; a probable Euro €1bn (US$1,054m) project with Russia to completely upgrade the country’s failing railway network; extensive port and airport developments; and debt rescheduling arrangements that are expected to result in credits in a number of productive sectors.

Others in the Anglophone and Hispanic Caribbean have taken a different approach, and have variously sought funding from bond issues, pension funds, public-private partnerships, or in the case of several recent major infrastructure projects, such as Jamaica’s Highway 2000, through Chinese involvement.

At the other end of the spectrum, soon-to-be oil-rich Guyana is on the cusp of an explosion of infrastructure development. In its case, the infrastructure investment mix will likely be US private sector finance, alongside Chinese and possibly Brazilian, Islamic Development Bank and the Gulf state funding for infrastructure programmes that will open the country to its neighbours and the wider world.

At a regional level, other options are emerging through the CDB which in the last few years has begun to play a far more significant role in working with its non-regional and extra-regional members to find ways to develop new sources of funding.

This has led, for example, earlier this month to it hosting a regional conference in Barbados to consider the multiple opportunities that now exist to use the Chinese Renminbi for financing in the Caribbean, and signing in its margins an agreement with the Export-Import (EXIM) Bank of China to explore the prospects for co-financing projects in infrastructure; human resource development; agriculture; and renewable energy and energy efficiency.

More generally, in 2015 the United Nations recognised in agreeing sustainable development goals (SDGs) for the period up to 2030, that investment in infrastructure and innovation will be the crucial drivers of national and global economic growth and development.

Despite this, the issue of China, Venezuela and others becoming more deeply engaged in projects in the region, is being politicised without any alternative being on offer.

While some countries like the United Kingdom continue to make funds available on a non-conditional grant basis for infrastructure in eligible Caribbean nations, the US, seems not to recognise that its slow withdrawal from the region is removing its ability to engage or influence, at a time when China and others see mutual benefit in co-operation.

Irrespective of what has been said in the US Congress about US security, newer development partners are largely not perceived in the region as threatening sovereignty or independence of action. Rather their engagement with the Caribbean reflects the way the world is changing, and enables the region to consider alternative, often empathetic views, at a time when the US President seems intent on casting his country’s global role and values into darkness.

China is no different from any other nation in wanting a dialogue on matters of concern, to which the region no doubt responds with understanding, mindful no doubt of Beijing’s supportive position on climate change and other issues on which there is a convergence of thinking.

Washington should think more carefully, and recognise that Caribbean development must be sustainable and is not a zero-sum game in which US interests must always be paramount.

In a commentary published recently in China Daily, Chen Weihua, the Chief Washington Correspondent of China Daily observed that ‘seeing China’s every move as geopolitics, is just dead wrong’. ‘Latin America is big enough to accommodate China and the US. The region will benefit if both countries increase their trade and direct investment in the region’, he wrote.

Or, to put it another way – as my friend Sir Ronald Sanders observed in a recent column – ‘If Washington is truly concerned about any undue influence on the Caribbean from China it should match the level of China’s bilateral investments in these countries on the same terms of soft loans and without conditionalities of a non-economic nature’.