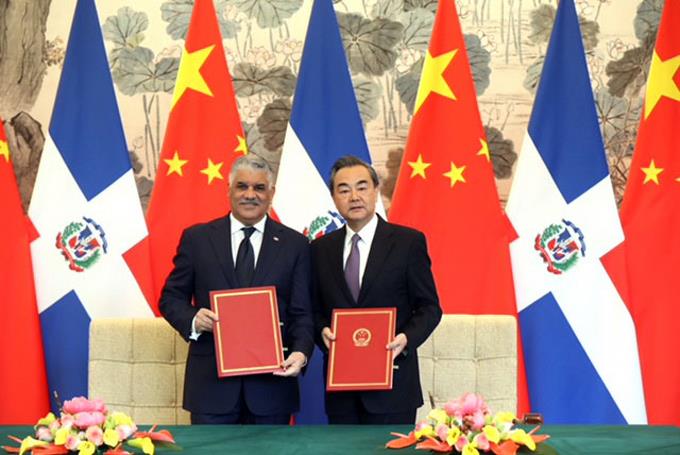 For some years now, China has sought to deepen its relations with the countries of Latin America and the Caribbean. It has done so as a part of a long-term geo-political strategy that is accompanying its rise to super power status.

Its objective in every nation in South and Central America and the Caribbean is to support development through investment and trade, and then over time to enlarge its economic, political and security role.

Up to the early part of this year its emphasis has largely been on delivering support on a bilateral basis. It has also tended to conflate Latin America and the Caribbean’s interests, barely differentiating its priorities or thinking in relation to smaller states.

However, this January at the Second China-Community of Latin American and Caribbean States (CELAC) Ministerial Forum held in Santiago, Chile, this changed. The ten-page action plan coming out of the meeting indicated that China not only wanted to extend its Belt and Road Initiative, but also do more at a regional and sub-regional level through a range of programmes that will see Beijing expand its relationship into many new areas.

A reading of the ‘CELAC and China Joint Plan of Action for Cooperation on Priority Areas 2019-2021’ makes clear that it is China’s intention to advance relations with all CELAC members on as flexible basis in ways that go far beyond trade and development.

It will seek to advance a range of well financed initiatives in areas that for example deepen political and security relationships, provide support for the development of modern transport, telecommunications and IT infrastructure, while enabling many more exchanges on issues from science to culture.

In short, Beijing has a programme that seeks new ways to deliver support on a scale that in recent years other nations have short-sightedly set aside for financial, political or other reasons.

Events this month suggest that China is now better placed to deliver on a regional basis what was agreed in Chile, having cemented in the last weeks its relations with two of the largest economies in the Caribbean.

In a long-anticipated development, it was announced on May 1 that the Dominican Republic had formally recognised China and was breaking off relations with Taiwan. Speaking in Beijing, Miguel Vargas, the Dominican Foreign Minister said that a new strategic stage was opening that would contribute to the progress of the country. President Medina subsequently said that his government expected that co-operation would be widespread and beneficial for both countries, and that he had received a letter from China’s President, Xi Jinping, to this effect.

The hope in Santo Domingo is that China, already the Dominican Republic’s second largest supplier of imported products, will now deliver significant investments in road, rail and energy infrastructure, as well as in agriculture and tourism. Although not confirmed, some reports suggest that the value of Chinese support could run to US$3.1bn.

The decision was followed on May 14 by the announcement that Trinidad and China had signed a Memorandum of Understanding (MOU) that makes it the first country from the Caribbean to partner in China’s Belt and road programme. This is the global investment and trade initiative which aims to ‘promote sustainable development, advance market-based industrial transformation and encourage diversification’ through Chinese financed projects.

Speaking following a subsequent meeting in Beijing with Keith Rowley, Trinidad’s Prime Minister, President Xi said “China stands ready to strengthen cooperation with Trinidad and Tobago under the Belt and Road Initiative and help promote its socio-economic development.”  He also observed that Beijing sees Trinidad as “a major country in the Caribbean region and is an important partner of China in the region”.

Official reports additionally quoted the Chinese Premier, Li Keqiang, as saying that China is willing to enhance co-operation in infrastructure construction, energy, finance and agriculture in Trinidad and was willing to encourage Chinese companies to invest.

What these developments and the gradual deepening of China’s relations with the Bahamas, Cuba, Jamaica, Guyana, Barbados, Suriname, and some of the islands of the Eastern Caribbean suggest, is that China is now poised to rapidly broaden and consolidate its regional economic and political role. Only Belize, St Lucia, St Kitts, Haiti and St Vincent largely continue to fall outside of its development reach as they continue to recognise Taiwan.

This is all happening despite heavy-handed warnings in public and private from Washington.

Speaking in February, Rex Tillerson, the former US Secretary of State, before travelling to Latin America and the Caribbean, told an audience at the University of Texas, “Latin America does not need new imperial powers that seek only to benefit their own people.” He also suggested that the Monroe Doctrine – the 1823 and 1904 policy that asserted US authority in the Americas –  was still of relevance.

What makes this extraordinary approach even less credible in the twenty first century is the absence of any alterative practical US support for the region other than for US-led renewable energy initiatives, and security measures largely intended to defend US Homeland Security. More significantly, the absence of US recognition of the damage done by the Trump administration’ decision to withdraw from the Paris Climate Change Accord – an existential issue for the Caribbean – has placed China on the side of the angels.

Although the EU and nations like Spain and France also see CELAC as the best vehicle for future Brussels cannot match the pace and content of what Beijing is now offering the countries of the Caribbean. Moreover, European delivery moves at a glacial pace, largely fails to involve the private sector and encourage entrepreneurial activity and disasters excepted, can fail to deliver when real-time responses are required.

China’s rise is of profound significance. It demonstrates that the world’s centre of gravity is relocating.

Despite well documented shortcomings in the delivery of its strategy in the Caribbean and elsewhere, President Xi’s willingness to put forward an alternative view to that of the present incumbent in the White House is welcome, as is his desire to see economic globalisation deliver greater global social equity.

Notwithstanding, every Caribbean nation from Barbados to Cuba continues to see value in the balance that comes from having multiple international development partners. Europe, Canada, the US, and others ought to be doing much more to help the region achieve this if as seems likely, China now seeks to rapidly expand its role in the Caribbean.