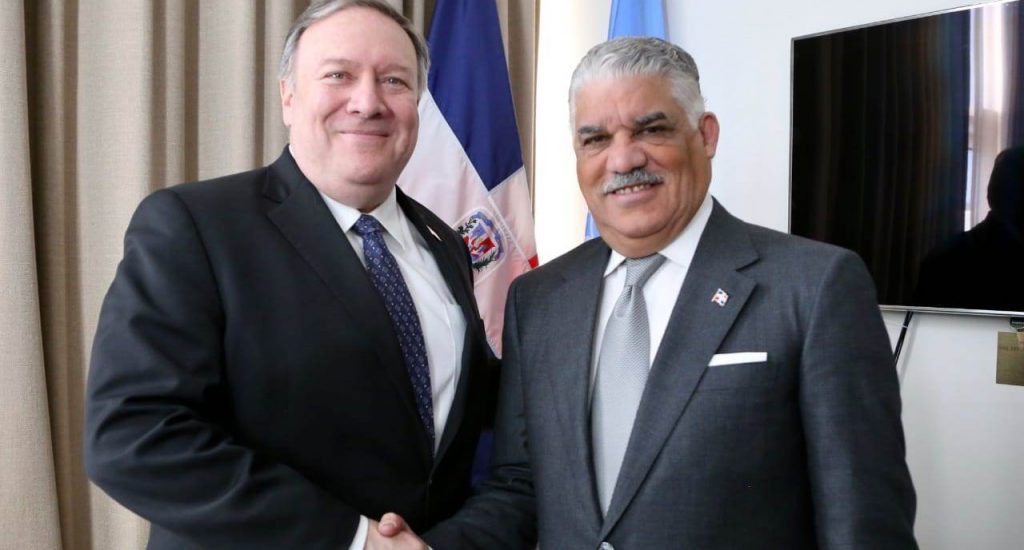 A little over a week ago the US Secretary of State, Mike Pompeo, met in Kingston with Jamaica’s Prime Minister, Andrew Holness. Subsequently, he held a round table with the foreign Ministers of The Bahamas, Belize, the Dominican Republic, Haiti, St Kitts, St Lucia, and St Maarten.

The encounter proved contentious even before it had begun. Barbados Prime Minister Mia Mottley sharply rejected the US approach, drawing a clear line between her government’s position and that of the Jamaican Prime Minister. Criticising the side-lining of CARICOM, Ms Mottley described the US approach as an attempt to divide and rule: a position backed by Trinidad, Grenada, St Vincent and Antigua. Mr Holness and Mr Pompeo refuted the suggestion, while others in CARICOM said little or nothing.

It was the second time in twelve months a high-level political meeting with the US has indicated that at a time of intensifying great power rivalry, CARICOM is irretrievably divided, when it comes to foreign policy.

In the absence of any balanced common policy approach to relations with the US, China and Europe, the Pompeo meetings demonstrated that there are seven Caribbean governments within the US tent and about five to seven others unlikely to enjoy the more intimate relationship that President Trump indicated was possible during a similar limited invitation encounter at his Mar-a-Lago home in March 2019.

This January’s meetings highlighted the issues that now dominate Washington’s hemispheric thinking, and by extension what it believes should be leading the Caribbean’s external agenda. They are the US’s desire to have re-elected Luis Almagro, the controversial Secretary General of the Organisation of American States (OAS), and the linked issue of how to respond to the Maduro Government in Venezuela which is showing every signs of consolidating its position, possibly worsening the severe humanitarian crisis it has created in the Americas.

Much less reported, the Kingston meetings indicated US concerns about Caribbean security, and the dangers it sees in the growing linkages in and around the Caribbean between terrorists, narcotics traffickers, organised crime, and corrupt officials

The meeting also conveyed Washington’s belief that anyone not with it on Venezuela and the actions it may take, must be against it.

At the press conference that followed the bilateral meeting, a cautious Jamaican Prime Minister characterised the discussions as “frank” …. “difficult and complex”: the suggestion being that in return for cooperation on issues of concern to his government, trade-offs were required if the US relationship is to be elevated.

Some clues to what this might involve came in the issues Prime Minister Holness and Mr Pompeo discussed, the emphasis in the US Secretary’s speech ‘Expanding America’s Commitment to the Caribbean’, and the substance of the round table.

Taken together they indicate in detail where US policy in the Caribbean is going.

In his remarks Mr Pompeo declared that the threat the US faces is very different from that experienced during the cold war. Citing ISIS in Trinidad, Hizballah in Latin America, guerrilla movements in Colombia, and the hemispheric roles of Venezuela, Cuba and Russia, he said these posed new challenges to US sovereignty and security, requiring closer cooperation with the Caribbean because of its proximity.

He set out a menu of responses.

The US wants to see the re-election of an activist OAS Secretary General ‘empowered’ to push Washington’s agenda towards Venezuela and probably Cuba as well; a desire to see by the end of this year a new international approach to Venezuela and fresh discussions on movement towards supervised free and fair elections; a wish to see Caribbean governments more actively engaged in US security concerns through closer cooperation on information sharing, crime and cyber security; and to have the region adopt its hemispheric approach to the rule of law, corruption, and human rights.

When it comes to investment and trade, Mr Pompeo made clear that he wants to see a more welcoming Caribbean environment for US investment and much more caution about China’s role. In calibrated language he made clear, without naming anyone, that the US does not expect to see Huawei having a greater role in telecoms in the region, claimed that China threatened regional and citizen security, and was obtaining a foothold by nefarious means: all points the Chinese embassy in Kingston rejected.

Make of this what one will, but in the real world no large or small Caribbean nation can ignore the US.

It is its neighbour, a major trade partner, is a principal source of visitors, investment and remittances, and despite China’s rise, for a while longer is still the world’s most powerful economic and military actor.

However, unlike President Obama, Mr Trump is leading US policy in directions that many consider not in the Caribbean’s broader long-term interests. He has made clear that the future is transactional, relations are bilateral and not necessarily constant, and regularly enunciates a near imperial belief that the US is the force around which the world should revolve to his electoral and the US’s economic benefit.

It is a policy that has largely sets aside multilateralism and its institutions, pays no heed to the globally existential issue of climate change, and appears daily to be moving closer to foreign policy by dictat.

Prime Minister Holness has so far managed to balance Jamaica’s relationship with both China and the US, indirectly forcing Washington to think more deeply about how to relate to the Caribbean. His approach relates well to the world that is emerging, suggesting that subtlety and achieving balance should be the aim of small states which have only limited ways in which they can resist external pressure.  Much the same could be said about the approach taken by the Dominican Republic and The Bahamas.

Whether this is sustainable in the longer term is questionable. It is quite possible that President Trump will obtain a second term, Russia expands its counter-balancing role in Venezuela and Cuba and then goes on to pursue a deeper engagement in Latin America and the Caribbean.

These are big themes. They require the region as whole to respond to US thinking, balance this against China’s continuing rise, and respond to the EU, Britain and Russia’s search for a global role.

For Caribbean Heads either individually, jointly or in new like-minded coalitions, the issue will be whether ideology, realpolitik, well calibrated balance, or fudge best serves their country’s long-term interests.

The OAS vote in March will be the first test of how the Caribbean intends responding.