The crime of walking without a vaccination card

Each day brings a lesson; it brings something new from which we learn something; each day comes with its own eagerness, and the enthusiasm is different, as the days are different. There are good, bad, and regular days, but the obligation of those of us who are lucky enough to be alive is to learn from each experience and always see the good side of things because although it may seem untrue, everything has something from which we can take something positive.

Sometimes things happen to us, so that instead of learning, we have to unlearn what we learned wrong, erase the traces of the road, and trace a different route towards the goal we want to reach.

In fact, we Dominicans are living something unusual; it seems that we have forgotten the many struggles waged by this quisqueyano people. This half-island that to become a Republic had to take and give itself a foundation with Spain, Haiti, and even with the United States (the gringos), but it seems that we have forgotten all that or they have made us forget it; they have even bombarded us so much with foreign words that the Dominican of today has almost lost his identity, and half of the population wants to find a way to get out of here.

One day we woke up prisoners of a vaccination card and were prevented from walking freely through the streets and places of our nation, just because the president of the day thought that without that vaccination card, we would not be citizens of the Dominican Republic. The worst part of the case is that on the one hand, I found Dominicans submissive and obedient to an irrational disposition that violates the constitution of our country; it is as if the one who does not have a vaccination card lost from one day to the next, all the rights with which he was born by the simple fact of being Dominican.

On the other side, the opinion-makers, evidently bought by the government, applauding like seals a measure that could not be more dictatorial. In this sense, I have reflected on all this, and I realized that the government could do with Dominicans whatever they want; they can put a gallon of gasoline at 300 pesos; they can give us blackouts 24 hours a day; they can put a pound of chicken at 150; crime can continue to take over the streets; they can do whatever they want and Dominicans will simply make a meme and laugh at their bad luck. For all of the above, I am sure that Trujillo and Balaguer would be laughing their heads off if it had been their turn to govern today’s Dominican.

Finally, what can be said is that Duarte, Sanchez, Mella, and Luperon would be amazed at the endurance capacity of contemporary Dominicans. At the same time, they would be ashamed of what we have become as a country, nation, and citizens. What else is left for us to endure?

You sir should be the future of your country,

What a mountian of nonsense. The dominican constitution in the Ley Gerenal de Salud- Article 64 stablished clearly that vaccinations are OBIBLIGATORY whenever the goverment requested such vaccinations. Stop Copy-Pasting all that american idioticy. this is a different country with a different history and set of values, transplanting nonsense from another country is ridiculous.

This is amazing to see here on this usually propaganda-filled site. I guess even DT has its limits! Good for them!

Mejia is absolutely right! It’s one thing to agree with vaccination, I am all for vaccinations if they work. But it’s another thing entirely when the government forces citizens through the removal of their rights. It is wrong to deny a portion of the public the right to access daily necessities and activities, and it is wrong for anyone to agree with a government doing that. All citizens have now lost the freedom to conduct their lives without showing their papers. What is the goal, what percent needs to be vaccinated for this restriction to end? Will it end or just transform into some other restrictions? If these vaccinations work then the vaccinated have nothing to fear from the unvaccinated–especially when we all must still maintain health safety protocols: thermometer scans, masks, distancing, and washing hands. So why is there a mandate? Who is it supposed to protect?

Thats the LAW it has aways been. Read the constitution.

Seeing this shows some people still have some sense. I can’t even believe that the Dominican people are laying down and taking it in the ass like this. I remember the people as very prideful and always standing up for their rights. Where are those people in these troubling times.

I think there is a Global Pandemic. According to all the real news, Vaccines are working very well to prevent people from dying. Doesn’t seem difficult to me…!

You mean the state-approved propaganda outlets, aka “MSM”?

Your beloved “real news” refuses to cover those statistical stories.

Your beloved “real news” is only interested in pushing the official state-issued narrative, their cherry-picked stats, and censoring any who dare stray from the official narrative.

Critical thinking is dead in the masses. And those who still possess those excellent skills are demonized as “spreaders of misinformation.”

idk i feel like the govt. is up 2 some thing here
And Me Scooby and the gang out 2 figure this one out

When does the vaccine passport end? Each year they can add more vaccines, and now you are a slave to their rules. Please people wake up! This is not freedom! This is not living! We are all eventually going to die, get right with God, and live your life! Stop living in fear!

On a positive note, the PRM now have dropped the “nice guy” masks and have shown all who they really are: tyrants, dictators, who have no problem requiring citizens and legal residents to do exactly as they require outside the constitution…or else.

Starvation? Not if you drop to your knees and comply.

Who thought the PLD corruption would be looked upon as The Good Old Days?

At the same time…and this is sad…Dominican citizens have also shown who they are: Big Talkers and who don’t do squat to back up their tough talk.

Sorry, PRM, I supported you once, but never again. As far as I am concerned, you are all no better than Castro, Chavez…or Trujillo. You are now the sworn enemies of the people, or at least freedom-living people.

I hope kissing Samantha Power’s butt and the bribes she brought were worth it.

If anybody thinks the jab mandates and lockdowns will be over at that hallowed 70%, you need to buy a bridge I’m selling. 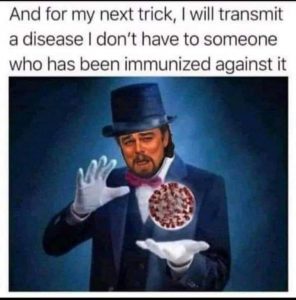 I’m embarrassed to be a Dominican. We allow ourselves to be locked inside for over a year. Nobody protested, we are lazy people that don’t fight for our rights.

Let us be 100% factually clear and honest:

1) The “vaccines” do not prevent the disease.

2) The “vaccines” do not prevent the spread of the disease.

So the lockdowns, “vaccine” mandates, and creating a two-tiered social class structure based on a person’s choice to inject an unknown substance into their body by dictate cannot have anything to do with healthcare.

The PRM needs to be heckled wherever their tyrant faces appear in public. They are no better than those who support Castro, Chavez, or any other world dictator.