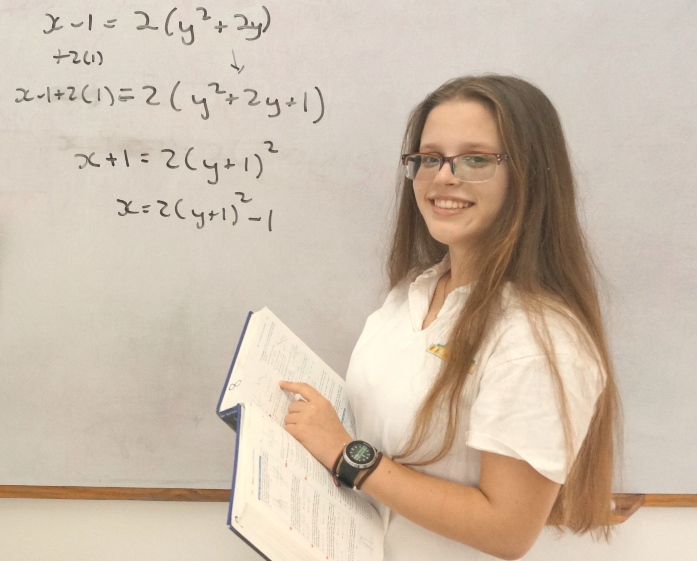 Sosua, Dominican Republic.- Polina Vishnevskaya, a 9th grade student at the International School of Sosua (ISS), is passionate about numbers.  “I spend two to five hours daily learning new mathematical topics and/or practicing logical problems,” she reports.  Her Math teacher, Rachel Harmon, recommended her to represent ISS in the Sosua District Math Olympics and Polina’s hard work has paid off.  Not only was she the winner in the District competition, she claimed first place as well in the Puerto Plata regional competition a few months later.

From there, Polina was invited for the second year in a row to compete at the Dominican Republic National Math Olympics representing ISS and the Puerto Plata region. As an 8th grade student the previous year, Polina attended the same event and claimed 4th place in the entire country for her age bracket. In May of this year, she was competing against students up to two years her senior and was still recognized with 5th place in the Dominican Republic in her category.

Polina attributes her success in the Math competitions to a variety of things: “My constant efforts and persistent spirit, the support of my family and friends, my teachers’ and ISS’s guidance.” The future is bright for this young mathematician who, as a result of her performance in the National Olympics, is now participating with a group of elite students to receive additional training in Santo Domingo every Saturday to prepare for the Pan-American/Caribbean Math Olympics in El Salvador in June 2017.

Polina’s abundant enthusiasm for learning and her diligent work ethic will serve her very well in her pursuit of competing at the international level in her favorite subject. Polina will be eligible to compete in the Math Olympics, through the International School of Sosua, for the next three years of high school and will likely add to her growing list of math accolades.

The International School of Sosua is a fully-accredited private, bilingual pre-K – 12th grade school located in Sosua on the North Coast of the Dominican Republic.  Enrollment is now open for the 2017-2018 school year.  For more information contact [email protected] or view www.issosua.com