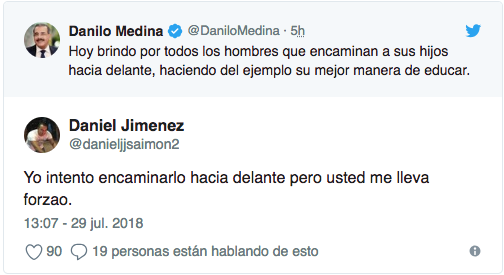 Santo Domingo.- President Danilo Medina sent out a tweet on Sunday, Father’s Day in the Dominican Republic, encouraging “all men to guide their children towards the future, because setting a good example is the best way to educate them.”

The president also urged fathers to instill in their own homes the respect, responsibility and love that society so badly needs.

Although some fathers responded to the president’s advice and greetings in kind, reactions from others Dominican fathers pulled no punches. One tweeted: “I’m trying to guide them forward but you make it so hard.” Another Dominican dad commented in the same vein: “As much as we try to guide them, you and your government are making the journey so much harder.” One referred to the Odebrecht corruption scandal: “I’m trying, but we’re struggling. As well as that 3.00 gift on gas, what do you say, Dani, what do you say, Danibrecht.”