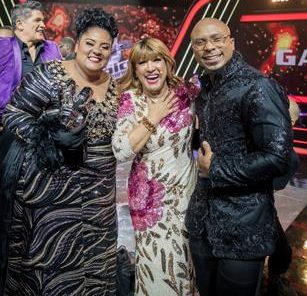 The Milly Quezada team’s Adriana Green took home the title of “The Dominican Voice” champion in the second season, which was televised on Telesistema channel 11. La Leona, Adriana Green, astounds with her great energy on stage right from the first auditions.

They all wanted her for their teams, but she chose Milly, with whom she ultimately won the competition. In her first big test, this street singer from La Romana not only turned the four chairs while singing a rendition of “Te Ofrezco” by Maridalia Hernández but at the conclusion, she shouted that she had been waiting for this moment for many years and even made fun of the coaches.

On Sunday, Adriana was measured alongside the other three finalists who had been selected for the championship round: Yunior Cruz from the Eddy Herrera team, Dalenny López from the Alex Matos team, and Deborah Herinstal from the Musicologist team.

Wonderful, great for her !