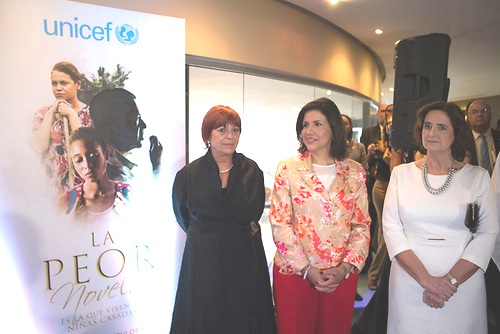 Santo Domingo.- The Dominican Government and the United Nations Children’s Fund (UNICEF) on Tues. launched a media campaign to help root out child marriage and early marriages, which affects a third of girls and adolescents before the age of 18, EFE reports.

The initiative “The worst novel” in telenovela format, tells the story of thousands of girls and adolescents in the Dominican Republic through the characters “Kenya” and “Paola.”

The story of Kenia, a 14-year-old girl who lives alone with her mother in a rural area of ​​the country, shows how, with a view to secure a better future for both, is handed over to a 55-year-old man.

“Paola” reflects the decisions of hundreds of teenagers who seek a way out of a family environment of psychological, physical and sexual violence, believing that their lives will improve when they marry.

“It’s time to break the silence, without cynicism, to defend the right that these girls have to have a happy childhood; we are the second region in the world with the highest incidence of this major problem,” said UNICEF Regional Director for Latin America and the Caribbean María Cristina Perceval.