The Nationals arrive in Houston with great pitching 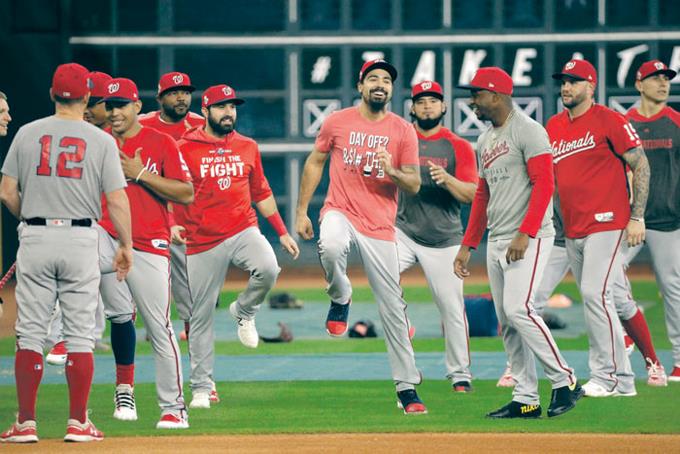 Several National players at a time of yesterday's practice.

The Washington Nationals have become the surprise team that, as of Tuesday, at the Minute Maid Park in Houston, will begin their journey in the first World Series in their history when they face the local Astros team and will do so thanks to impressive pitchers.

Without them, it would not have been possible for them to surpass rivals such as the Milwaukee Brewers, in the National League wild-card game, the Los Angeles Dodgers in the Divisional Series, and the St. Louis Cardinals in the Old Circuit Championship.

Now before the Astros, they will have the same potential as Max Scherzer, Stephen Strasburg, Venezuelan Aníbal Sánchez, and left-hander Patrick Corbin.

Scherzer will be chosen for the first game of the series to the best of seven that is going to play the part and in which he will have a rival who is thought to be the best pitcher currently in the majors, also right Gerrit Cole, the star of the Astros.

Then the duel will be between two other rights, Justin Verlander for the Astros and Strasburg for the Nationals, which means that the “Autumn Classic” will have a large part of prominence and definition from the mound, with a competition that’s likely to become something memorable.

“I know a few of the boys in their rotation, and personally I am excited that they have reached the World Series, and even more motivated to be able to face them,” said Cole after having eliminated the Astros from the New York Yankees (4 -2) in the Campeonato Series of the American League. Also, the series will begin with an anecdote that both teams shared the same training complex in the spring and faced the start of the preseason in February when Scherzer homered to the first batter of the game.

Now, eight months later, they face the Astros as the best team of the season to achieve 107 victories seeking their second World Series title in three years.

While the Nationals debut in the “Fall Classic” turned into a revelation team of the playoffs since they did not enter the forecasts or even reach the postseason.

Hence, the Astros start as favorites for the 2-1 mark in the bets, provided that their starters, including Zack Greinke, also launch very well as recognized by the Houston team driver, AJ Hinch, who also trusts the dominant group of relief pitchers he has in the bullpen.

But both teams also feature a formidable offense with the second Venezuelan baseman José Altuve as the Most Valuable Player (MVP) of the Championship Series for the Astros and the Houston-based Anthony Rendón for the Nationals.

Rendón is a candidate for the MVP prize of the National League, while the Astros will have third baseman Alex Bregman, in the same position in the American, not forgetting the shortstop Trea Turner, of Washington, and Puerto Rican Carlos Correa, of Houston.

Both teams will also have brilliant and stellar rookies such as Juan Soto.