The 10 best Dominican baseball batters, according to Luis Polonia 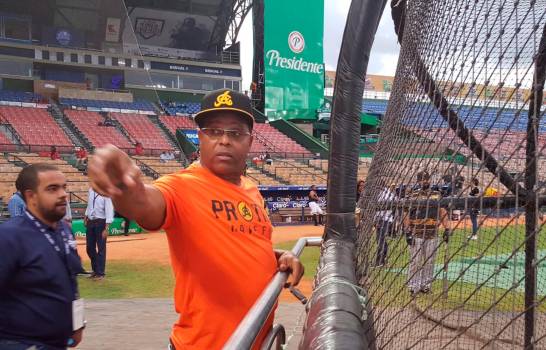 Luis Polonia is the batting coach of the Águilas Cibaeñas.

One of the best hitters in the history of the Dominican winter ball, Luis Polonia, chose his selection of his 10 best hitters who have passed through this circuit.

Poland’s is one of the most lucrative careers, decorated with several achievements and records. Not in vain ended with .304 for life. In his case, he declined to mention the order of the 10 batters strictly, so that the order presented here does not mean that this or that player occupies that position in the ranking. Those who will be listed in this case will occupy the place where you mentioned them, but, it is insisted, they do not correspond to a ranking.

Another point, “I’m going to rely on players that I had the opportunity to see when I was a fan,” Poland says. “I can not mention Osvaldo Virgil, Julio Martínez,” to give an example, “but of those that I have seen and those that I believe, there are also some players who may not have some super numbers, which I can consider one of the best hitters in this league.”

Without more, the immortal of Dominican Sport mentioned his 10 and here they are.

“In the times I played here, that was one of the most difficult hitters I saw in this league,” says Poland, who highlights the great ability to hit .400 in the winter ball of Québec. Hernandez retired after eight seasons with a lifetime average of .302. “That guy was through the clouds, in the winter ball he had to take his food apart. It really is not among the records, but hit .408 (1981-82) and .340 (1982/83).

“I saw Mota when in those days that I was a boy playing with the Licey, I saw what I was doing as an emerging hitter, which is one of the most difficult things, that I have lived and I know how difficult it is to get out of that bank,” analyze Poland. Mota is a lifelong batting leader (.333); fourth in scored (342) and second in triple (41), two less than Poland (43).

“Although perhaps he did not have the durability that I had in this ball, for me one of the most difficult outs that this league had,” adds the current batting coach of the Aguilas Cibaeñas on his former teammate, who is third in batting for life (.316). In 13 seasons he played 272 regular-round games for his Big League commitments.

“Maybe he didn’t play the years he had to play in the winter ball, but when Julio Franco was playing on this ball, it dispelled any doubts that there were no batting champions here. I had the opportunity to play with Julio Franco in Mexico, one behind the other, me second and him third, imagine with these two guys together,” he says of the General, who is sixth in batting for life (.308). He played 266 games in 14 seasons and is one of 5 players with .400 in one season (.436 / 1997-98).

“A criminal, Domingo Ramos, had to be out, he is the best hitter the Bulls have had and a tremendous third baseman,” Poland said.

And the tenth is clear?

On one occasion, Poland gave Matthew a glove at the suggestion of the Alou trilogy member. “And you don’t know how flattered I felt,” says Poland. It happened during an Águilas Escogido match, in Quisqueya.

Poland acted for what Mateíto was for him in his career, to the point that there was a theme about the famous “machucón” of the late player. “I always tried his bunting technique and tried it in practice,” he says.

That day when the gift of the glove occurred, Poland inquired of Mateito. “Get old, I’m curious, how was it that you hit those bunts?” He questioned.

And the answer was: “Don’t even try it, I hit with a 35-long, 35-ounce bat. It wasn’t because I wanted to, it was that the bat was so big and so heavy that the ball had to be given back because I had no way to take out that bat.”

The bat that Poland used was 30 ounces; “35 ounces and that is a weight,” says the well-known “King of the hit.”

Mateo (or Matty) Alou was one of the great hitters who went through the Dominican winter ball and in passing, one of Poland’s role models. “It was a lot of inspiration for me, when I started,” says Poland. “He had many aspects of my game” and in fact, of the three Alou brothers, Felipe and Jesus, it was Mateo with whom he talked most about baseball.