Major League Baseball season in danger due to coronavirus 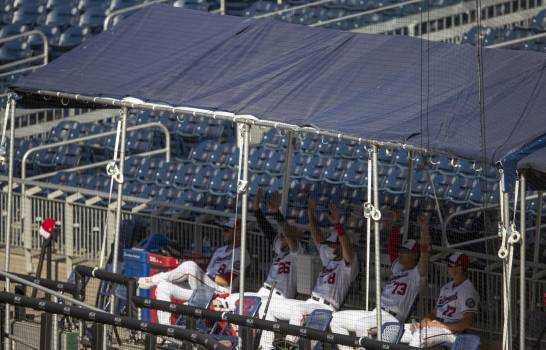 The coronavirus threatens the 2020 major league season. In the image, the Washington Nationals players watch the game from the dugout annex in the stands, when they faced the Philadelphia Phillies on Saturday, July 18. (AP / Alex Brandon)

The above was reported by several sources close to the league, who found out about the conversation.

They add that the dialogue revealed that both the league and the players recognize that the next few days are key after an outbreak was registered within the Miami Marlins, leaving 21 members of the organization testing positive for the coronavirus.

Two positive tests by St. Louis Cardinals players on Friday exacerbated concerns within the sport about the presence of the coronavirus and about whether the jointly agreed protocols are being followed properly to prevent outbreaks similar to those in Miami.

If another outbreak materializes, Manfred, who has the power to end the season, could make that decision. The commissioner insisted that at the moment “there is no reason” to suspend the season despite growing contagion of coronavirus in players, which forced the suspension of more games this weekend.

Social networks that broadcast major games have been alerted to look for possible alternative programming
He reiterated his confidence that the season can continue and called for a greater commitment from the players to protect themselves from the virus.

Several players informed about the call fear that the season will end on Monday if more positive tests occur or if the players continue to not strictly abide by league protocols.

10 days from the start of the campaign, six of the 30 MLB teams have their games suspended.
The 2020 season will continue, says Commissioner Rob Manfred who resists the suspension and asked the players to respect the health protocols. (EFE).

The Cardinals’ game against the Milwaukee Brewers was postponed on Friday and rescheduled for a doubleheader on Sunday.

Previously, the Marlins and the Philadelphia Phillies, who played most recently against Miami on Sunday, had missed scheduled games.

Meanwhile, the majors and the association jointly released the results of the coronavirus tests until Thursday.

The results indicate that of the 11,895 samples taken during the past week, there were 29 positive tests: 20 by players and nine by staff members.