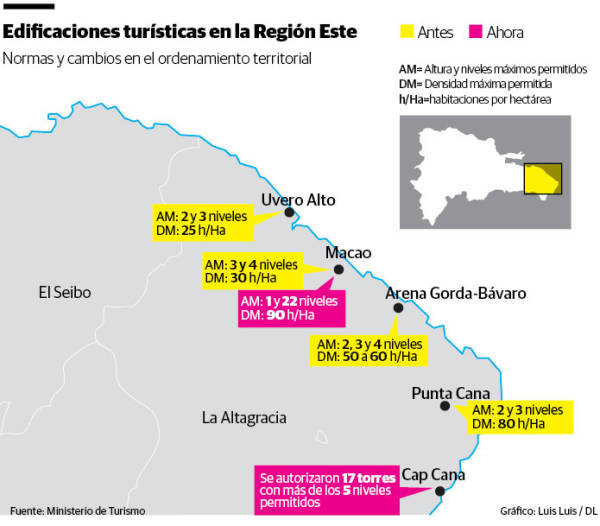 Santo Domingo.- A sudden change to the Sectorial Plan for Tourism Land Management in Punta Cana, Bávaro-Macao, allowing the construction of high-rise buildings in Macao, had led to a confrontation between the hotel sector and the government. Some sector representatives are describing it as a move that benefits certain economic interests.

After five years in effect and an application that hoteliers consider ideal for tourism development in the Dominican Republic, the Ministry of Tourism made a surprise change to the Tourism Land Management Plan for Punta Cana, Bávaro-Macao, allowing the construction of apartment blocks up to a height of 22 floors on a second strip behind the coastline. Up till now the maximum height permitted in the whole area was four floors. The change to the plan was disclosed this month.

The president of the Eastern Region Hotels Association, Ernesto Veloz, expressed outrage at the sudden modification. “They didn’t approach or call us before approving this project,” he stated, adding that this measure represented a change to the rules they have worked with for years.

“What is clear is that, evidently, benefits are being generated for one sector at another’s expense,” said Veloz.

This is not the only change authorized by the Ministry of Tourism in recent months that will change the country’s tourism skyline. In Cap Cana, where projects are subject to special urban planning regulations, a 17-floor structure has already been authorized, above the permitted level of five floors, and on December 19th the tax incentives were issued through a provisional tourism project category authorized by Confotur.

Fifteen planned high-rise towers are now registered as individual companies in Cap Cana; however, according to the commercial registers they all belong to the same company, Cap Cana S.A., as does the Condos Playa Juanillo project. This project, which is linked to the Trump Organization, hosted a visit to Cap Cana by Eric Trump in February.

In the Macao area, no details of the companies and developments that have been authorized are available, but media reports suggest that at least two high-rise buildings have been given the green light by the Ministry of Tourism, in the context of the change to the land management plan for Punta Cana, Bávaro-Macao.

The Hotels and Tourism Association (Asonahores) has written to Minister of Tourism Francisco Javier García asking him to revoke the resolution on the grounds that it goes against the principles of legitimate trust and legal protection. Asonahores points out that the government approved a 10-year tourism plan in 2012 and their minimum expectation was that it would respect its validity, “without unilaterally and abruptly modifying the features and limitations on construction and density that have such a strong impact on the property rights of the lands and the commercial attraction of the projects,” writes association president Joel Santos in his letter to the Minister.

The president of the Housing Constructors and Promoters Association (Acoprovi), María Gatón, believes that height is not an advantage in tourist areas. On the contrary: taller structures mean higher pollution levels and reduced environmental sustainability.

“I don’t see the need to build 22 floors in the Macao area. I believe that low rise and low density is more appropriate for a tourist area,” stated the Acoprovi president.