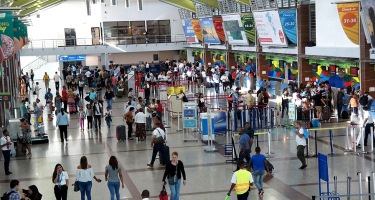 At least nine airlines that operate regular flights from the Dominican Republic to North American territory could be affected by the immigration restriction measures announced by the President of the United States, Donald Trump, who recently suspended the entry of legal migrants to that territory.

In the last six months of 2019, according to data provided by airport authorities, more than 250,000 Dominicans with a travel visa and others with a residence card traveled from the Dominican Republic to different cities in the United States.

If the measures continue, beyond the established sixty days, US lines, including JetBlue Airways, American Airlines, Delta Air Lines, United, and Spirit Airlines, would stop receiving millions of dollars due to the restrictions on transporting thousands of Creoles who travel every year to the United States as tourists and other personal and commercial matters, according to Listín Diario.

President Donald Trump signed an executive order last Wednesday to suspend the issuance of “green cards” for 60 days, in order to protect Americans from competition from foreign workers during the Coronavirus pandemic.

The measures also affect thousands of Dominicans who were opting for a visa or a residence card, whose procedures until the next 60 days will be suspended. To the restrictions is added the situation of the temporary closure of the North American consulate in the country.

The most visited destinations in the United States, by Dominicans during the last six months of 2019 were the cities of New York, Boston, Philadelphia, New Jersey, Massachusetts, Houston (Texas), Miami, (Florida, Orlando), Fort Lauderdale, Charlotte, Atlanta, and others.