Frank Rainieri: “The purchase of a second home in the DR has grown” 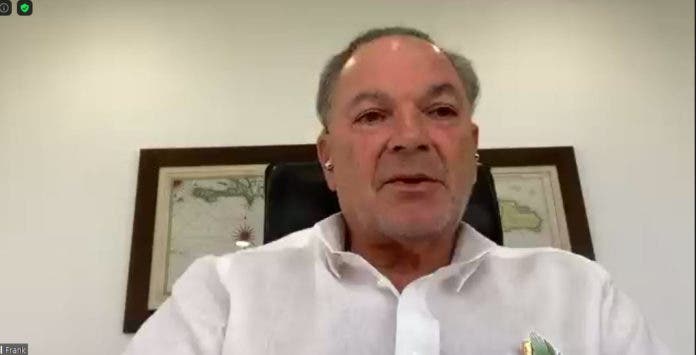 Frank Rainieri in the Adompretur virtual conversation, interviewed by dozens of tourism journalists.

Reveals that RD tourism needs 30 to 45 days to start receiving tourists, hence the urgency to announce a restart date.

Santo Domingo. Frank Rainieri, president of the Puntacana Group revealed yesterday that the demand for the acquisition of a second home by foreigners in the country has grown, even during times of paralysis of hotel tourism.

“A revealing fact in the context of the shutdown of tourist visits due to the conditions of the Covid 19 pandemic, is that the demand for a second home in the DR by foreign investors in need of a safe and comfortable space has increased, in addition to their residences in their home countries,” said Rainieri when he appeared at the VI virtual conference of the Dominican Association of Tourist Press (ADOMPRETUR).

The businessman argued that real estate tourism has a different behavior than the temporary hospitality offer in hotels.

“Second-home residential tourism has acquired an importance that we have clearly perceived. Foreigners in retirement have increased their purchases of a second or even alternative home in the DR because they feel the need for a second option of residence, safe and with first-world facilities. We need to get the air travel back up and running ASAP to continue to cater to this demand,” says Rainieri.

In the discussion, moderated by the president of Adompretur, José María Reyes and broadcast by more than 100 portals and digital platforms, the speaker said that tourism has had considerable losses but that the role of the industry is not to be affected by pessimism and what needs to proceed is for the government to initiate the relaunch process promptly.

He presented onscreen the requests of more than ten airlines North American, Canadian, Latin American areas that have already requested permission to restart flights to Puntacana.

But Rainieri indicates that it has not been possible to respond because of the country’s civil aviation authorities, whom, he recognized as professional in their performance, but reiterating that it cannot take any longer to announce that tourists can begin to be brought in, highlighting that the countries in the region have already taken that step.

The founding of Puntacana took place in November 1969 with the purchase of a vast area of ​​virgin land and without access roads, so it was an odyssey to visit them. On the part of a group of investors, they saw in the area the brilliant tourist destination which it has become.

For 22 years running, its management caused losses to its managers, so it took a lot of faith and perseverance to work to become today almost a synonym for the Dominican Republic.