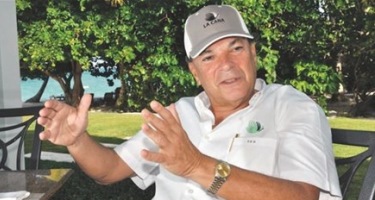 Holding the important golf event is worth 8 million dollars

The president of the Puntacana Group, Frank Rainieri, said that the PGA was moved to September and some of the world’s best players are expected, given the absence of championships in different countries due to the coronavirus pandemic.

The businessman’s response was direct. “We said to him, ‘Let’s put it off.’ Because I said, this is going to happen (the measures of the pandemic) and an event like the PGA, is the one that has been seen the most by American television in recent decades and the one that has had the most followers,” in addition to being “The event to relaunch the Dominican tourism industry.”

He pointed out that the attitude was to keep the contest to be held at Corales Puntacana Resort & Club Championship, since they told him: “we can in September, I say, let’s set the date there.”

Rainieri said he was glad they agreed even though the contest coincides with the Ryder Cup which is the other golf event to be played from September 22-27.

The Ryder Cup is played 12 against 12 between the United States and Europe, which total 24 players, “there are not 70, nor 80, nor 100 players, who are those who participate in an event of this type” such as the Corales Puntacana Resort & Club Championship.

For the celebration of the tournament, the CEO of the hotel group trusts that the number of flights will be increased. He gave as an example that for July 800 flights were announced, which is a large number, which is not the case if it is taken into account that, in normal conditions, only in a week of July, such as 2019, 500 flights arrived in the country. Of those 800, 60 flights were eliminated.

In addition, he explained that the money for the assembly of the tournament “that is paid by Grupo Punta Cana totally,” although he pointed out that there are small national sponsors, “but they are small and that has a very high cost. That montage is worth $ 8 million.”