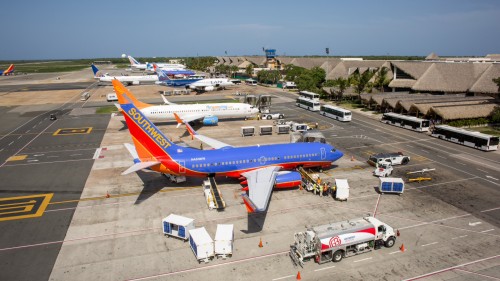 FROM EUROPE, LATIN AMERICA, THE UNITED STATES, AND CANADA

The management of the Punta Cana International Airport reported that it has scheduled to date some 36 commercial flights that will arrive in the first 7 days of operation at the terminal, out of the total of 363 flights that they expect to receive in July.

According to the terminal authorities, the figures may change depending on the flight schedule; that will bring tourists from different countries in Europe, Latin America, the United States, and Canada.

For its reopening on July 1, arranged by the Dominican government, the Airport has implemented a reinforced security plan within its facilities to prevent and control the spread of COVID-19, which include, among other measures, a Thermo machine-graphic in the arrival and departure terminals of passengers; a monitoring station with trained personnel from the Ministry of Health and the provision of a primary care space in the billing room.

In addition to an isolation space for initial inspection by the personnel of the Ministry of Health; ambulances equipped to give support quickly and effectively in the event of any eventuality; protocol of action in case of possible cases, both in aircraft and in terminal areas, following the guidelines of the Ministry of Health and other local and international organizations.

Likewise, the number of kiosks in the check-in area was increased, where access to passengers will only be allowed; and the implementation of boarding pass readers for direct scanning by the passenger at the gates or departure gates and at security points.

The passenger verification process will be through body scanners and metal detection arches to minimize manual verification; They have also placed dividers between passengers and migration, billing, the Cesac control point, at the boarding gates, and tour operators.

Disinfection and hygiene measures were intensified in all areas of the airport and in operations teams, as well as the increase in the frequency of cleaning machines and the use of broad-spectrum chemicals for disinfection.

In relation to the physical distance measurements, the following actions were taken into account: placement of floor templates between 1 and 2 meters away in the areas of the departure lounge, transit, checkpoints, migration, and customs; placement of notices about physical distance in areas of migration, billing, checkpoints; reduction of the number of passengers on buses from 40% to 50%, in order to avoid crowds. Boarding gates will also be assigned taking into account the number of passengers between departure lounges until operations allow; and all security barriers were expanded.

All these additional measures to the obligatory use of masks, the physical distance of 1 and 2 meters between people and antiseptic gel dispensers with an alcohol degree greater than 60%, placed in strategic places in the terminals. A continuous preventive communication campaign will be maintained in the terminal areas and passenger access.

In the case of collaborators, health monitoring has been increased through temperature detection upon arrival at the work area; health control in the medical office; mandatory use of masks and gloves; cleaning and disinfection of work vehicles and personnel transportation; distancing regulations in areas of common use, and communication campaign and continuous talks about active care through the company’s internal communication area.