Ambassador Hemingway projects massive arrival of Canadians to the DR 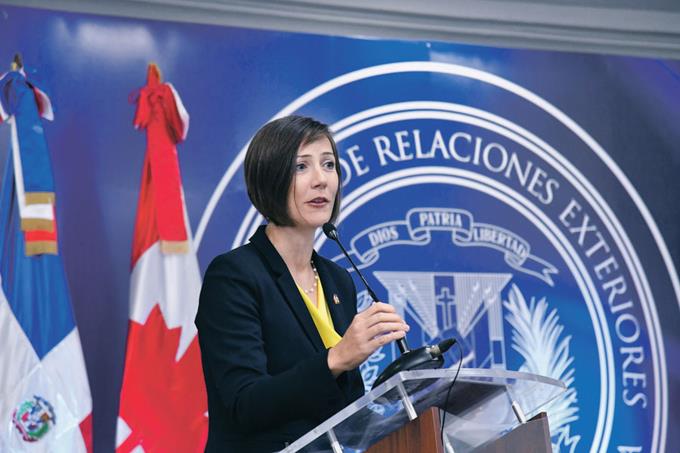 STARTING OCTOBER, PEAK SEASON FOR ITS CITIZENS TO VACATION

The Canadian ambassador to the Republic, Shauna Hemingway , hopes that starting in October, the peak season for Canadians on vacation, there will be a massive influx of tourists from the aforementioned nation to the Dominican Republic.

And, in the case of Canada, the ambassador understands that they will be in good time because they usually travel more from October, after enjoying a brief summer between July and September.

In that sense, she believes that progress is being made in the country for the opening as of July, which gives the Embassy time to prepare for the return of Canadians in the autumn.

“We love this country, we come year after year because we feel that they welcome us in such an excellent way and I am sure that Canadians will return,” she said.

She acknowledged, in an interview with Fernando Quiroz, that tourism is currently going through a time of great uncertainty, and it is difficult for tourists who have bought offers and then had to cancel.

Hemingway described the response of the Dominican government, airport and airline authorities as very good for the successful return of Canadians, since, last March, when the government announced it would close the borders due to the Covid-19 crisis, there were about 20,000 Canadians in the country.

“That says very good things about the country and the authorities, it gives confidence, which has not happened in other countries, where it has been more difficult,” she stressed.

She recalled that before the coronavirus (Covid-19) about 900,000 Canadian tourists came to the Dominican Republic annually, according to a statement.

Regarding the investment of Canadian companies in the Dominican Republic, Hemingway reported that it is currently around 7 billion dollars.

“It is an important amount, I think Canadian entrepreneurs are present in all the large sectors of the country and companies have a lot of investment in the financial sector, in tourism, mining, and manufacturing,” she said.