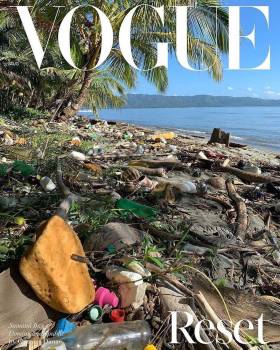 The criticism of this work comes out because only the image of the Dominican Republic, published by British Vogue, shows a landscape with garbage. (Carmen Danae)

In the midst of an attempt to open tourism in the Dominican Republic, the British magazine Vogue published a photograph showing one of the shores of the bay of Samaná full of garbage.

This image from the August issue is part of a campaign with which the fashion magazine embraces appreciation for the natural world and seeks to restart itself by giving artists of color a chance after being questioned as a racist.

This accusation gave rise to a #VogueChallenge contest, in which creators from around the world submitted their own performances.

In the post made on the Instagram account by @britishvogue there are five images that show landscapes from Japan to the Dominican Republic, and in it, the editor-in-chief @Edward Enninful is quoted, “I could never have expected this level of enthusiasm in the reaction to British Vogue’s Reset covers,” referring to the reaction on the 14 landscape covers.

The criticism of this work occurs because only in the image of the Dominican Republic published by British Vogue is a landscape with garbage and many on social networks considered this image as “inappropriate,” since it supposedly does not represent the beauty of the country.

Among these reactions, criticism of the creator of photography from the Dominican Republic, Carmen Danae, has predominated, accusing her of allegedly having a campaign against the country, highlighting the ugly and thus damaging one of the central axes of the Dominican economy, tourism.

In an interview for Diario Libre, the author of the photograph, Carmen Danae, assures that “I try not to reduce myself to the attacks and criticism of some people who prefer to protect tourism in the short term than to protect our national parks, our natural heritage, and incredible biodiversity and endangered ecosystems.”

The artist commented that the criticism for showing this reality of the country is “more than anything of people who think that tourism is more important than our biodiversity and health.”

All these criticisms were made in the Instagram publication of the plastic artist and environmentalist, to share as an achievement the fact that a photo of her: “a woman who has been discriminated against for her color and for being born in a third world country” be in a magazine as important as Vogue.

“Congratulations on your exposure as an artist in a magazine like @britishvogue. As a Dominican, I am concerned that this piece has been selected to represent our coasts, something that from now on (just seeing the contrast with other destinations) is sending a dire message,” commented a follower of Carmen.

Another follower also wrote in her post: “Why don’t you also show off the incredible beauties we have to offer, instead of harming the tourist economy of a country that, as you well know, is working to avoid what you posted in your photo. We do have these situations in certain areas, but why don’t you realize the effort being made to improve it, instead of pointing it out. And to be proud of an achievement that does so much damage to a sector that is making an effort to improve things on our beautiful and spectacular island.”

For Carmen Danae, thanks to the fact that this image was published in Vogue, a fashion magazine that has 4.2 million followers on Instagram, therefore of great global influence, dialogues are created that help to solve the problem.

“Help by creating dialogue, conversations, and reactions like the ones we are having now. A magazine like Vogue has never given way to a reality as global as that of plastic and environmental destruction. And that helps because people from all over the world could see that image and see that this problem is not only in the DR … That problem is something that is happening all over the world and the solution cannot be found if we do not accept that there is a problem and that we must change,” the artist tells Diario Libre.

In the first image, Carmen shared on her Instagram, and with which she competed, she explained that the editor @edward_enninful asked the artists to send images of landscapes in nature that meant something to them.

In response to this, she sent an image of Samaná, which is also the place that she considers her home, and explains that this image shows the true state of our natural landscapes in 2020: interrupted, contaminated, threatened.

And with this image, he invites us to “unite to fight against climate change before it is too late. Pollution, loss of biodiversity, and extinction are issues that we must take seriously.”

In response to criticism and seeking to explain his intention of the photo, he shared a photo album showing all the images he made for the contest.

“Here are all the images I uploaded for the #voguechallenge #voguereset, I see that some have resistance to seeing reality as it is … To see the face of everything that is not only beautiful but also what is in this moment threatened and screaming for our help. If we are unable to see that there is a problem, we will not be able to solve it,” says the photographer in the publication.

And she adds: “All those images were taken in our incredible and threatened Samaná Bay, a place that I consider to be my home since my family is from Samaná. The images that do not have plastic are from Los Haitises National Park, and the one that is contaminated, which was chosen by the editor, is from the Bajo Yuna Mangrove National Park, which is adjacent to the Haitises and discharges its waters, and everything they drag, in the bay.

In the publication, she goes on to say that “the vast majority of tourists are taken to the Haitises and, consequently, the Lower Yuna Mangroves, which are equal to or more spectacular than the Haitises, have been completely drowned in plastic and in our garbage.”

She also says: “I am very sorry that so many of you are bothered to see the harsh reality, but as a conservationist and environmentalist, my job is to show what has been ignored. Tomorrow is International Mangrove Day, an ecosystem extremely valuable for its ecosystem services and, at the same time, highly threatened, we have lost more than 40% of mangrove forests around the world in the last 2-3 decades due to deforestation.”

Danae concludes by saying: “I hope that my images push actions that allow us to value them as our ancestors valued them, and that we can once again see all the mangroves in our beautiful country free of plastic and protected from deforestation.”

After making this publication, the criticism continued and the artist blocked the comments.