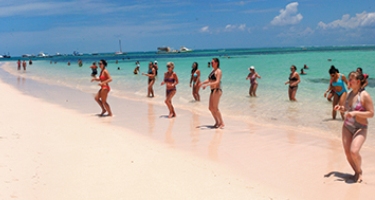 In the first semester of 2020, the arrival of tourists to the country by air was reduced by 61% compared to the same period of the previous year, according to data in the January-June Tourism Barometer.

In the document, prepared by the Technical Vice Ministry of Tourism, under the leadership of Radhamés Martínez Aponte, with data from the Central Bank, it is indicated that 1,394,091 non-resident visitors arrived by air in January-June, which in absolute terms represented a decrease in 2,181,207 visitors.

The Punta Cana International Airport registered a 64.6% decrease during the first half of the year compared to the same period of 2019. The terminal received 735,531 non-resident foreign visitors.

While at the Las Américas International Airport ( AILA ), the influx of visitors was reduced by 59.8%, and 196,206 arrived, according to the local press.