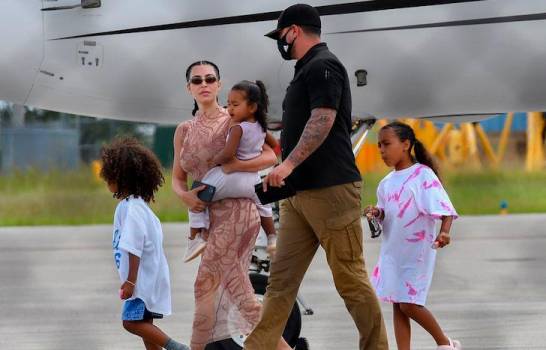 Kim Kardashian, Kanye West, and their family left the Dominican Republic,  landed in Miami last Sunday, according to TMZ with exclusive images of celebrities leaving the private jet.

The couple spent a week in a fortress-like property on a Dominican beach, specifically in Punta Cana, while they solved problems in their marriage. Now, the family will head to the western United States, where they would go glamping.

The rapper himself shared a video from his vacation in the country dancing with his eldest daughter, 7-year-old North.

As revealed by an anonymous source to People magazine, they decided to travel together so they could be in private. The source also described that the founder of KKW Beauty is exhausted.

However, one issue that the 43-year-old producer made clear is that he will continue his search to enter the ballots for the elections next November.

“Kanye has made it clear that he will continue to run for president. Kim isn’t happy about it, but that’s not her focus. She just wants to do what is best for the children. And she believes that finding a way to save her marriage is the best thing for it,” said the source.

It’s rumored that the marriage is living the tensest moment after the controversial statements of Kanye West. This is confirmed by images where Kim and Kanye are seen in a vehicle having a heated conversation while she burst into tears.