Abinader: “There will be a remarkable recovery in tourism at the beginning of 2021” 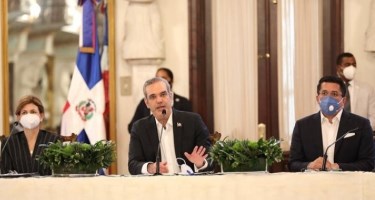 Recognizes rescue of tourism is the pending issue still

The president, Luis Abinader, feels optimistic about the future of Dominican tourism and trusts that at the beginning of next year, there will be a significant recovery in the sector, which contributes around 8% of the Gross Domestic Product (GDP) and almost a third of the currencies that the country receives.

The president reaffirmed that the most important tourist centers in the country are prepared to receive tourists in safe conditions and that the cases of COVID-19 in the areas are minimal.

“Right now, COVID-19 is non-existent in tourist areas, a few cases,” he explained.

The Dominican president stressed that there is an adequate private hospital infrastructure in tourist areas, specifically in Punta Cana, and that in Samaná, the public infrastructure has been prepared “to receive any case of Covid with the best doctors.”

Abinader said tourism is the pending issue in the recovery because sectors such as agriculture and free zones have already shown promising signs, registering levels similar to those achieved in 2019.

“We still lack tourism, but we have made an extremely aggressive and innovative plan,” he mentioned, referring to the program presented in the first days of his Government, which began on August 16.

For the head of state, the plan has elements that in no other country have been offered to tourists, as is medical insurance coverage for foreign visitors.

“While in other countries they charge (tourists) for compulsory medical insurance, we cover insurance for each tourist who visits the country. That has gone down very well in the markets, to the point that now, already in October, we are going to open, I would say, half of the hotels in the country, especially in the Bavaro area,” he said.

Also, he said it means more work for Dominicans. “It also means that there is confidence in the recovery of tourism among the main hoteliers.”

Abinader indicated that there had been fluid and constant conversation with hotel representatives to work together on the recovery of the tourism sector, according to Diario Libre.

“Since we won the elections, and as president, we have communicated at least four times with the hoteliers. We have had meetings between virtual and face-to-face four times,” he pointed out.