Collado: no effort will be spared to raise tourism in Puerto Plata 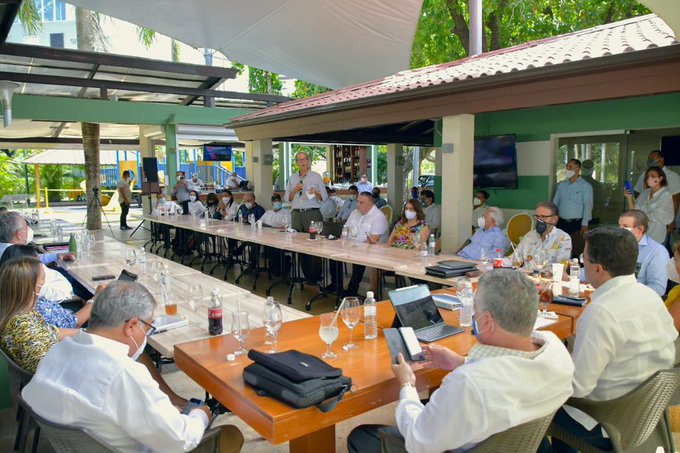 HELD A MEETING WITH THE TOURISM ENTREPRENEURS OF THE NORTH COAST

The tourism business of Puerto Plata received a visit from the Minister of Tourism, David Collado, for the second time, searching for continuing the process of recovery of the sector in the “Bride of the Atlantic.”

During the meeting, he assured that no effort would be spared to raise the tourist destination of Puerto Plata, so the actions and public-private partnerships to achieve sustainability and revitalization of the goal will continue.

To this end, Collado set up a public-private commission that will work with the director of the Infrastructure Execution Committee of Tourist Areas (Ceiztur), Sixto Manuel Brea, to agree on which works should have priority to be executed in the destination.

He informed that negotiations have already been carried out with different airlines to ensure foreign visitors’ arrival to the “Novia del Atlántico” (Bride of the Atlantic).

Among the agreements: the Sunwing airline has 14 flights programmed for December, West Jet with a weekly flight from December 19, 2020, to April 3, 2021, and 6 flights in December with Air Transat.

Similarly, a cooperation and promotion agreement for the Puerto Plata destination was signed with American Airlines, JetBlue, and Expedia.

The meeting took place at the Blue Jack Tar Hotel and was attended by the different institutions that make up the destination’s tourist value chain.

Also attending were Paola Rainieri and Andrés Marranzini, president and executive vice-president, respectively, of the Association of Hotels and Tourism (Asonahores).

The main agenda was in charge of the hotel executives Edmundo Aja, Luis López, and José Natalio Redondo, who presented the destination’s priorities regarding market development and air connectivity, infrastructure, and reorganization of the tourist hub of Puerto Plata.