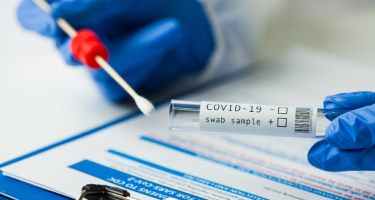 Travelers entering Canada by land or air through the province of Alberta will soon have the option of getting a Covid-19 test at the border, which could shorten quarantine times, in a pilot project that is the first of its kind in Canada, Prime Minister Jason Kenney announced.

The mandatory quarantine period for returning international travelers will remain in place for now. But the 14-day self-isolation period could be shortened to approximately 48 hours if a traveler receives a negative COVID-19 test result at one of the province’s two border crossings.

“We must move forward to develop policies that facilitate safe travel. While there is much work ahead, we can see a return to normal travel,” Kenney said during a press conference last Thursday, calling it an important day.

Beginning November 2, the new Covid-19 test option will be offered at the Coutts land border crossing in southern Alberta and the Calgary International Airport.

All travelers who choose not to participate in the pilot must comply with the standard 14-day quarantine.

For the second consecutive day, Alberta has broken two Covid-19 records for both new and active cases, reporting 427 new cases and a total of 3,519 active cases of the disease.

The voluntary screening option is a joint pilot project between the province of Alberta and Canada’s government.

It will be available to essential foreign workers (truckers, health care workers, and other workers exempt from the current federal travel ban) and any Canadian citizen returning to the country through Alberta.

If the test is negative, travelers will be able to leave their quarantine site as long as they commit to a second test on the 6th or 7th day after arrival at a community pharmacy participating in the pilot program, the province said.

“Our dual objective here is to protect both lives and livelihoods, and that’s especially important in Alberta with the depth of the energy price collapse and its economic impact,” Kenney said.

But as Federal Health Minister Patty Hajdu noted, the pilot program only applies to Canadian residents and foreigners who already have permission to come to Canada.

“There are no changes now on the border to be clear. And this is a controlled study with a willing province that has the tools and capacity to be able to administer the study,” Hajdu said.

Participants will be closely monitored through daily symptom checks and asked to follow improved preventive health measures, such as wearing masks in public places and avoiding visiting high-risk groups.

Calgary Dr. Joe Vipond likes the idea of using tests to shorten quarantine periods for people flying into Calgary. According to ABC, he is less enthusiastic about the program being used on the land border between Canada and the United States.

“The U.S. fees are ridiculous, and they’re simply not taking safety precautions. So they are a higher risk population than those who would come from other areas to Calgary,” he said.