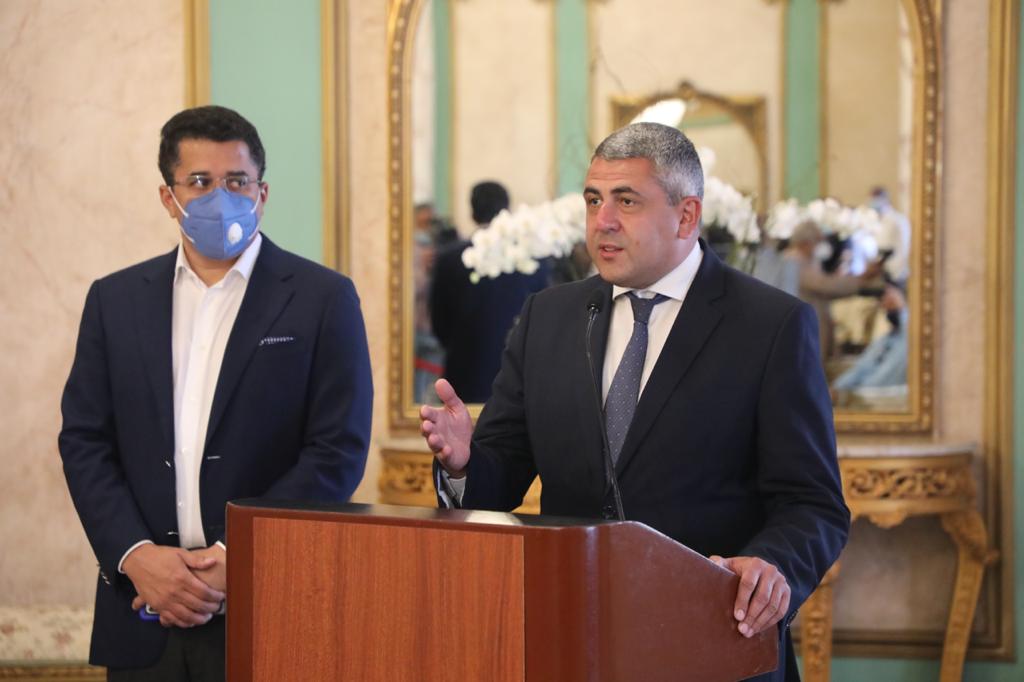 Santo Domingo.- The Secretary-General of the World Tourism Organization, Zurab Pololikashvili, affirmed this Wednesday that the Dominican Republic is an example in the world of how tourism can be managed with responsible protocols in the time of COVID-19 managing to attract international tourists with health security.

As a sign of confidence in Dominican tourism, Pololikashvili is vacationing in the country with his family. He took the opportunity to visit President Luis Abinader on his last day of rest.

After the conversation with President Abinader at the National Palace, Pololikashvili, accompanied by the Minister of Tourism, David Collado, said that the country is prepared to receive tourists with its health protocol, equipment, security, and infrastructure.
He considered that Abinader is the president with some of the best ideas he has seen in recent years to lead tourism, attract more tourists, investments, create new destinations and generate more jobs.

“There is no better place to invest than this paradise. A legally safe country, with a government, motivated to carry out interesting, creative, modern, and sustainable projects, ”said Pololikashvili.

He congratulated the Dominican government for managing tourism after acknowledging that it is not easy to maintain a balance between health and the economy.

Among the qualities to choose the Dominican Republic for his first family vacation amid the pandemic, he valued its history, culture, and above all, for its safety.

“We have seen with our own eyes that it is a safe country, that it complies with all the protocols in the world that are needed in these rare and difficult times,” added the UNWTO leader.

During his stay in the country, he said that thanks to the rigorous health protocols, he confirmed that it is safer than being at home or going to the supermarket. Also, he highlighted the beauty and hospitality of the Dominican Republic since his arrival in Punta Cana. He understands that traveling is possible in a responsible way and that not traveling is not the solution to avoid the pandemic, so he urged to travel and enjoy the world.

He stressed that in the history of tourism, there is no crisis as intense as that caused by COVID-19.
Due to its successful experience in the management of COVID-19, the Dominican Republic can serve to hold a summit of leaders in the region to host good practices that promote tourism.

They accompanied Pololikashvil, his son Nikoloz Pololikashvili, Bernardo Castillo, advisor to the Minister of Transport of Spain, and George Shamdze.

“That the secretary-general of the World Tourism Organization chooses this destination is another accolade that we are doing things differently and very well,” said the Minister of Tourism.

Collado pointed out that the Abinader government works hand in hand with international organizations and the private sector, which is why confidence in tourism has recovered.

He said that in February, which was shaping up with a drop in tourist visits, they would conclude with more than 100,000 visitors, indicating that tourism is rising firmly.

All the decisions made by the Dominican government, he added, are considering tourism as the primary industry in the country, which represents 15% of the Gross Domestic Product (GDP).

Also, due to the importance of some 500,000 Dominicans making a living from this activity, the crisis has impacted an entire chain that includes small travel agencies and tour operators.

Among the measures adopted by the country, Collado cited insurance for COVID-19 coverage, being a pioneer in this initiative.
Likewise, the incentive of domestic tourism has allowed nearly 100,000 employees to regain their jobs in the various hotel complexes in the country.

Collado stressed that in the random tests carried out in all Dominican airports and, in hotels, with antigen tests for the North American market, the positivity rate does not exceed 1.20%, so tourism does not represent a risk to increase contagion.