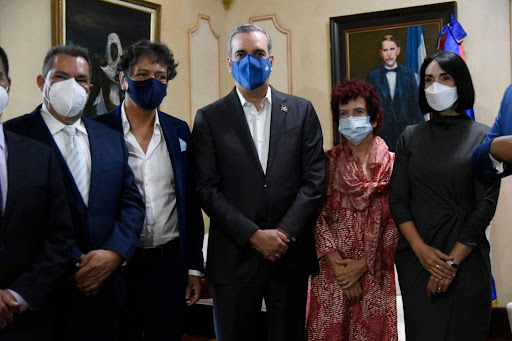 President Luis Abinader received the actress, producer and screenwriter, Jane Chaplin and the film production ADN Bachata in his office.

The president assured that he will always support art and culture, especially bachata. In this sense, he wished that the Dominican Republic would become the capital of this musical genre, currently occupied by Madrid, Spain.

Together with the daughter of the king of silent movies, Charles Chaplin, the president, who the first lady, Raquel Arbaje, accompanied, received Víctor Minaya, producer of ADN Bachata; Bonny Cepeda, vice-minister of Culture; Luis José Chávez and Carlos Batista, advisors of the project.

Minaya gave the president a compilation of the development of bachata, which shows it as one of the musical rhythms with the most outstanding international presence.

Abinader promised Minaya to talk to Alfredo Pacheco, president of the Chamber of Deputies, to receive a project by which bachata would be assumed as the spearhead of the promotion of Dominican culture.

With the filming of ADN Bachata, the aim is to promote the Dominican rhythm as part of the Country Brand under the auspices of the Ministries of Culture and Tourism.