The Ocean Club, a new luxury hotel managed by Marriott in Puerto Plata 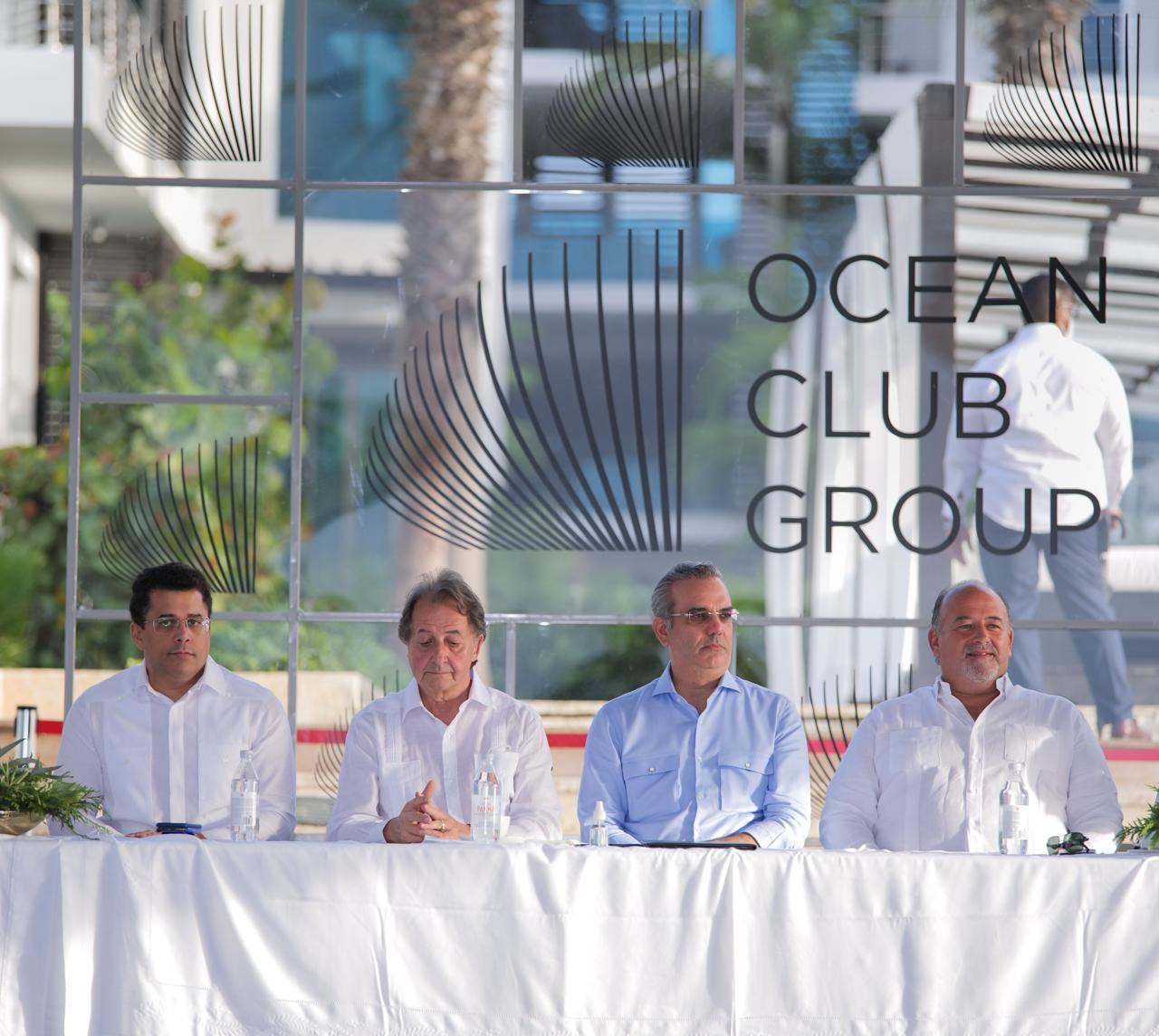 President Luis Abinader and the Minister of Tourism, David Collado, led the inauguration of the new and modern luxury hotel The Ocean Club, Luxury Collection of the Marriott chain, in the company of the executives of the tourism development company Ocean Club Group and Marriott Hotels International.

Ian Schembri-Sant, CEO of Ocean Grupo Club, said that “we are excited to present The Ocean Club, from The Luxury Collection line, one of the three hotels that we are developing and operating in our alliance with Marriott International in the north coast of the Dominican Republic.”

Regarding future projects, Schembri-Sant added that “the Ocean Club Group is a conglomerate of several international investors as well as Dominicans, committed to investing 350 million dollars in the northern part of the Dominican Republic for the construction of 4 luxury hotels, in the coming years; thereby creating more than 2,000 direct and indirect jobs.”

On his side, Minister Collado highlighted the importance of developing the North Zone by national and foreign investors who wish to contribute to its growth with international projects.

«There are large investments for Puerto Plata, which are consistent with the thought of this hotel chain and that under a commission the president is appointing together with the vice president Raquel Peña, the ministries of Tourism and the Environment, a work table to streamline all processes, complying with the framework of the law and that these investments enter Puerto Plata,” he added.

Hervé Humler, co-founder of the Ritz-Carlton hotel company and president of The Ocean Club Group, Marriott International, expressed the hotel chain’s commitment to developing the tourism sector in the Dominican Republic.

“Each of our projects adheres to high ethical, safety, and environmental standards with a comprehensive plan of social responsibility that seeks to protect the biodiversity of the area, provide immediate solutions to the needs of the surrounding communities and ensure the protection and maintenance of natural resources in the places where we operate,” he said.

The Ocean Club of the Luxury Collection by Marriott aims to provide hotels on the north coast to make it one of the leading luxury tourist destinations in the country. The project will be equipped with 60 suites, while the hotel’s design pays tribute to the cultural past of the island’s indigenous and European settlers and the hospitable town of Sosúa.

The event was also attended by José Ignacio Paliza, administrative minister of the Presidency; Deligne Ascención Ginette Bournigal, senator of the province of Puerto Plata, among other personalities such as the Israeli ambassador, Daniel Biran, Minister of Public Works.

Now if the government will actually build the real highway promised between Santiago and Puerto Plata the North coast MIGHT become a top tourist destination. Without that road, POP will continue to be a second-rate destination with only one small airport within driving distance of these new super-resorts!

Exactly , and is no sign off stoping my mom sends over 500$ a month working in a factory here in the US , they was suppose to build new schools , said they couldn’t do it because they was not enough land smh but here they are giving land away to these people , the Dominicans need to wake up and stop thinking rice and beans is enough for a vote this president has sold out more of our land than ever and it doesn’t benefit us at all it all goes right back to the big countries smfh and on top of that they fill the whole job industries with Haitians forcing us to go to The us and spain where we are discriminated I don’t wanna leave my land we’re we are all one people and is so peaceful besides all the bs I feel at home in dr and no disrespect to the white folks in america you treat us just like black people same hate towards us , when we have Nuthing to do with yur black and white problem at all , but here yu are coming to the DR there’s a huge expat community here and is only growing and what we do we welcome you. Smfh love always 🌹

Well. If you want to be left alone stop asking for help. THe President of DR knows where money comes from. Tourism. Otherwise you would not have a strong economy.

For help who helps us,?

I agree ,I am a American who moved to the DR 3 years ago and it really took my by surprise to see USA hotel chains in the DR charging more then they do back home and paying Dominican $15,000 peso a month . It’s Explotación . Even the amount of Chinese business in the DR that sales crappy merchandise for double the amount they sale in the USA is crazy . After 3 years of living in the Dominican Republic 🇩🇴 it sadden me to see other countries taken advantage of your beautiful Country . I still haven’t figured out how the average Dominican Survive with the cost of goods such as tv, furnitures , cars and decent clothes are almost double the USA . It seems to me Dominicans need to boycott the tourist industry until they pay them a decent wage of at least $50,000 peso a month that’s still half of what these big hotels would pay American or European workers . They are responsible for driving up the cost of living in the Dominican Republic, so the average Dominican should at least get to get decent pay.

I agree this will do nothing for the Dominican people. Abinader is a terrible. Police still make $400 a mon

I as a tourist but also have Dominican parents I look around and see all these poor cities. I am one that love staying in resorts and I’ve been to Puerto Plata alot. My thing is why not help the country in building helping and educating the Dominican people. If you look around one of the richest islands is the Dominican Republic. It produces alot of goods other islands do not. With just the taxes that come into the country why isn’t the country doing better????? I have asked this question for years. I would love to sit down with the president and talk about these issues that I as an outsider see. Every GVT that comes into power comes out richer than what they came in. They has to be some accountability somewhere

Jjjoooooooo (some words eliminated)…… they destroyed the first reef of larimar dumping tons of rocks in to the ocean to build a wave breaker in front of the hotel also privatise the beach.
They build a illegal Marina ……..
So they ppdon do anything for the society they just capitalists, exploring cheap labor countries and destroying the healthy
Sustainable tourism.

looking forward to his assistance in reference to my ocean- front property 6,100 acres in Puerto Plata, purchased 35 years ago, Realtor sold us a property that is landlocked. That is against the law Can you be of help . We paid this realtor 100.000 dollars plus ten percent commission We cannot sell because there is no entrance. The property is landlocked. The Realtor has been playing games with us. With all accomodations this large parcel of ocean-front land could be erected into a great tourist attraction. We would love to sell But nobody wants it when they find out there is no right of way. Can you help and use your authority to stop this scheming. I am putting all my trust in you. My partners and I are US citizens. I thank you for your attention to this matter. Respectfully yours.
Annette Georgette Lecher. Dagsboro, Delaware. U S A My phone 302 7323231