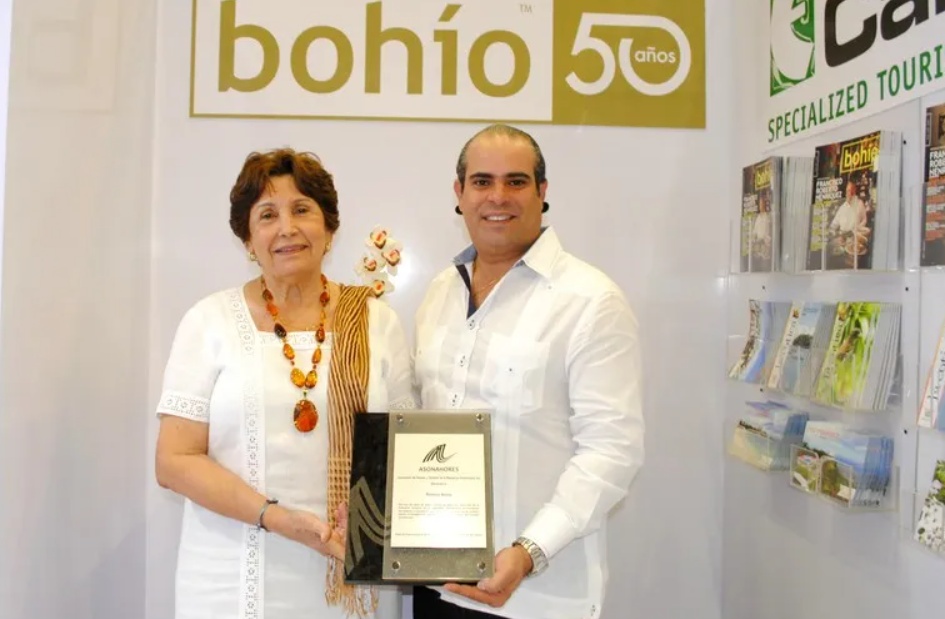 Rita Cabrer and Reynaldo Caminero are recognized by the Association of Hotels and Tourism of the Dominican Republic (ASONAHORES) in 2016. (Photo: external source)

Founded in 1966 by Luis Augusto Caminero (†) and Rita Cabrer Botello, Bohío has managed to remain since day one working hard for the promotion of our tourism through its presence in the most transcendental events of the national and international tourism calendar.

For Rita Cabrer, nostalgia is mixed with the joy of having the privilege of continuing to be an energetic voice in promoting and positioning our country as a tourist destination for so many years “and having the loyalty and support of a sector that has accompanied us on such a wonderful path.”

Among the congratulatory messages received in the magazine during these five decades, recalls the magazine’s director,  there is one that highlights, dedicated in 1982 by “my great friend Ángel Miolán (†),«father of Dominican tourism,» who after congratulating us for “our arduous and successful work,” wrote in his humorous tone: “I remember when they yelled at me in the streets: “Where are the tourists? In Miolán’s head.”

“Time has shown that they were not in his head because tourism has become the first line of our country’s economy,” expresses Cabrer in her editorial dedicated to the magazine’s 55th anniversary.

The hard work of Ediciones Cabrer also includes the “La Cotica” National Tourism Guide –founded in 1984 and published in 11 languages–, the Find Yourself regional maps, the news portal BohioNews.com and Tourispedia, among other projects.

La Cotica is distributed to national and foreign tour operators and has been the support material par excellence of the Tourism Promotion Offices (OPT) belonging to the Ministry of Tourism (MITUR) with a presence in nearly thirty cities around the world. It also reaches Dominican diplomatic representations accredited abroad through the Ministry of Foreign Affairs (MIREX) and accompanies the Dominican delegation in the different international tourism fairs.

In 2011 Reynaldo Caminero, Rita Cabrer’s grandson and the company’s executive director, was the architect of the editorial, graphic and design transformation that Bohío magazine underwent. Reynaldo has worked to maintain Ediciones Cabrer’s print and digital media as leaders in the sector in promoting the Dominican Republic as a tourism destination.