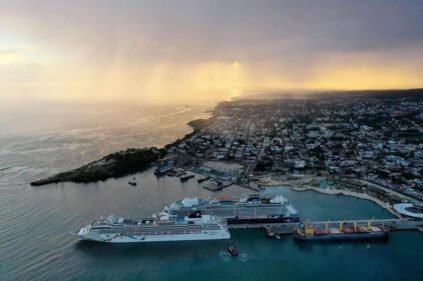 Stephanie Kfouri, provincial director of Tourism in Puerto Plata, reported that the arrival of ships in the first week of January 2022 at Amber Cove and Taino Bay cruise terminals stimulates the arrival of visitors to the North of the country.

“Today we have 4 cruise ships in the two terminals,” Kfouri said.

The director announced that a Carnival Cruice Line cruise ship would port with 1,217 passengers and 906 crew from Rotterdam, and the Carnival Mardi Grass would bring 4,136 passengers and 1,673 staff to Amber Cove.

Meanwhile, she stated that the Celebrity Apex cruise ship, coming from Fort Lauderdale, Florida, United States, would arrive at Taino Bay with 1,294 passengers and 1,218 crew members.

In addition, the Norwegian Dawn cruise ship, coming from the city of Tampax, Florida, would touch the port with the number of 1,040 passengers and 1,059 crew members.

“We have a total of 7,687 cruise passengers and 4,856 crew members, between the two ports,” emphasized Kfouri.