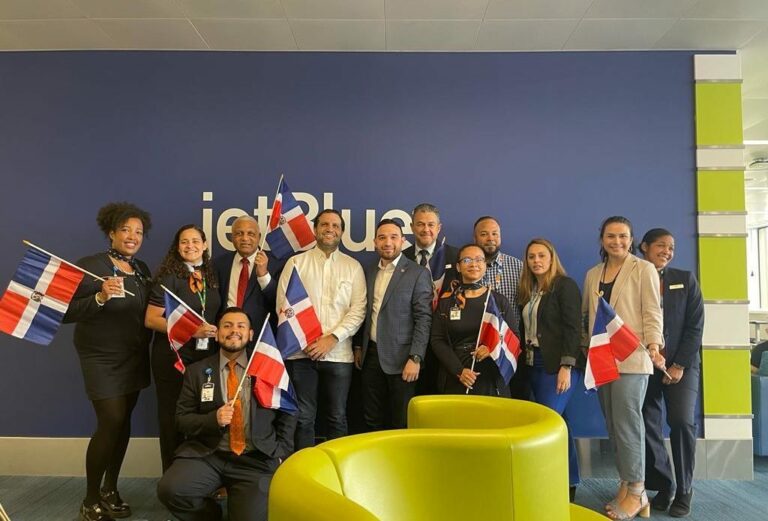 The Consulate General of the Dominican Republic in Boston, Massachusetts, represented by the consul general, Ramón Antonio Cruz, and the vice-consul Charge d’Affaires, Luis Gustavo Estrella, inaugurated the new Boston -Puerto Plata air route of the US airline JetBlue.

“On behalf of the government of the Dominican Republic , we thank JetBlue airlines for opening this flight to Puerto Plata, the bride of the Atlantic, because it will have a significant impact for the region at a tourist level,” said Ramón Cruz.

He also highlighted the importance of this air route for Dominicans residing in the New England region of the United States “because it allows them to enjoy yet another destination of our beautiful Quisqueya.”

On his side, Gustavo Estrella explained that it is a new route that has been achieved “through inter-institutional efforts, between the Civil Aviation Board ( JAC ) and its director, José Marte Piantini; the general secretary, Paola Pla, and thanks to the excellent business and investment climate that the management of our president Luis Abinader emits, and the efforts of this Consulate.”

He indicated that after 17 test flights, “today JetBlue officially decides to keep this important route, which will be moving an average of 1,300 passengers per month to this important destination, bringing the Dominican family and tourists closer, to boost the local economy further.”

He said that this momentous event was celebrated with great joy to the rhythm of merengue among passengers, JetBlue executives, and Consulate staff, all waving the Dominican flag.

Also present at the flight’s inauguration were Sandra Palmer, JetBlue’s General Manager of Airports Operations; Natalie Martínez, manager of Government Affairs of the airline; Raúl Cepeda, an official of the Dominican Consulate in Bosch, among others.