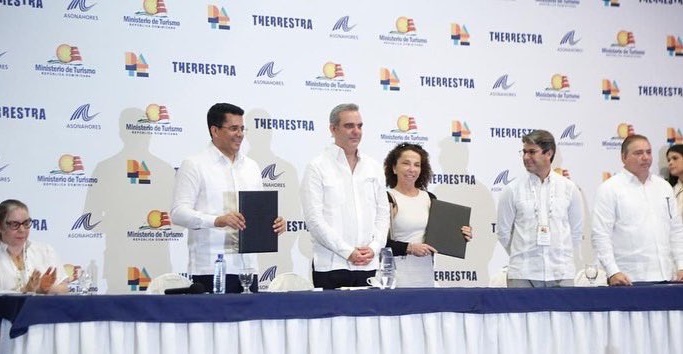 The Ministry of Tourism ( Mitur ) and the Association of Hotels and Tourism ( Asonahores ) reaffirmed their commitment to Canadian airlines and tour operators to promote new air routes that increase the number of visitors to the country. For this, they signed new agreements of cooperation.

During the celebration of DATE 2022, the Dominican directors explained that the initiatives are part of the strategies developed by the Tourism Cabinet to continue increasing the number of visitors from the different issuing markets and contribute to the growth of the country’s economy.

It is stipulated that Air Transat undertakes to expand its weekly flights throughout the summer and next winter, benefiting the destinations Puerto Plata and Punta Cana.

While in the agreement with the Sunwing Group, which with Air Canada Vacation moves more than a million Canadian tourists a year to the DR, the company assumes the commitment to double the arrival of tourists from Canada to the Dominican Republic. This company will reach Puerto Plata and Punta Cana.

Likewise, the agreement with Air Canada Vacation was signed to expand its flight frequencies to Puerto Plata and Punta Cana.

President Luis Abinader stated that the government’s work to recover tourism had been carried out with passion, patriotism, and enthusiasm. In this regard, he acknowledges the contribution of the entire population.

“Because as you know, we arrived at the Government at the worst moment in the history of tourism due to the pandemic, and when we saw the economic data, we said, if we did not recover tourism, we would not recover the economy of the Dominican Republic and that is why we insist,» he expressed.

Abinader reiterated that his insistence on attending the opening of the hotels sought, as is the purpose of the Government, to create jobs so that people can earn a decent living.

“I am extremely optimistic, not only because we already had the best month for tourism in the Dominican Republic, April, but we also project that May will also be a great month, a great summer and even a better season for both fall and a season high,” he added.

The official reiterated his support for the sector and affirmed that with collaboration and understanding, the type of success could be achieved, as is the philosophy of his government so that it translates to the benefit of Dominican men and women who increasingly participate and live off the tourism sector.

What about flights to Santo Domingo ?