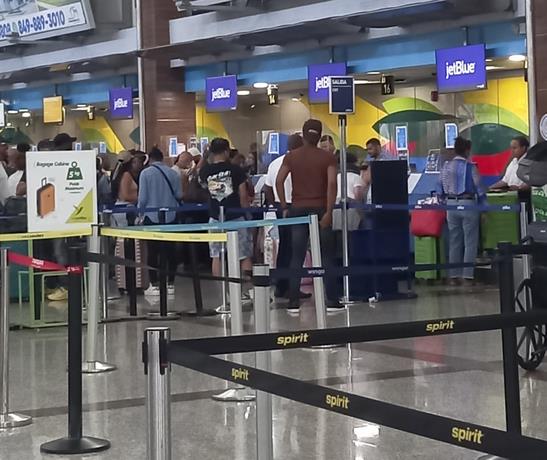 The delays are also caused by the searches of the security and immigration agencies in the terminal.rafael castro/ld

Santo Domingo, DR.
Air travel in the current commercial aviation situation has become an absolute nightmare, with the growth of operations and flight delays, long lines at airports, and boarding difficulties.

According to data provided by the Flight Operations Department of Aeropuertos Dominicanos XXI (Aerodom), out of 1,738 flight operations registered in July at the Las Americas International Airport from and to different countries, 900 of these were delayed in their arrival and departure from the airport terminal.

The data provided also revealed that only 70 cases, that is, less than 10%, of the delays were caused by the airport’s operations.

Among the deficiencies that would have caused this situation, the report cited the unavailability of boarding gates, lengthy searches of passengers by government security agencies, and other problems in the terminal’s operational system.

According to the reports, the delays in the departure of some operations would have been generated by the rigorous revisions made to the luggage of travelers by agents of the National Drug Control Directorate (DNCD) and the Specialized Body of Airport Security and Civil Aviation (CESAC). As well as a lack of essential equipment. The Aerodom report, however, states that the great majority of airline flight delays during this period occurred at the airports of origin, attributed to the lack of pilots, flight attendants, and flight attendants of the airlines operating the service.

According to the data, of the 900 flight delays out of the 1,738 operations in July, the most significant percentage of flights arrived and departed to and from U.S. cities from and to this aerostation.

They also indicate that flights arriving and departing the country from Europe, South America, Central America, and the Caribbean were also delayed.

Crew
The lack of crew, pilots, stewardesses, and flight attendants have been a serious post-Covid-19 pandemic problem for airlines. And to which they attribute the most significant percentage of responsibility for flight delays and cancellations.

Jet-Blue is the largest airline operating in the country, operating more than 75% of the flights originating daily at Las Americas Airport.