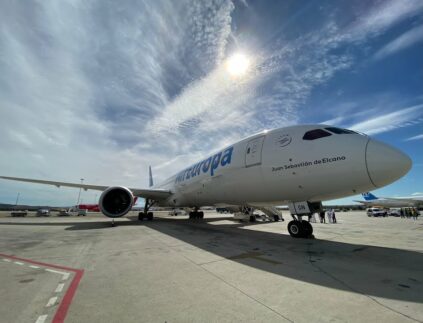 Air Europa increased its long-haul operations with another 4,600 new seats to cover the route between Madrid and Punta Cana, and to connect this tourist destination in the Dominican Republic with Miami, Caracas and San Juan de Puerto Rico.

The airline is also making 17,000 additional seats available to its customers for the Christmas holidays.

The reinforcement of operations includes more than 4,800 extra seats between the Peninsula and the Balearic and Canary Islands.

Specifically, between December 21 and January 4, the Globalia Group airline will operate 27 new flights with its Boeing 737 fleet between Madrid and Las Palmas de Gran Canaria and Lanzarote, and between Palma de Mallorca and Madrid, Bilbao and Granada.

Likewise, to reinforce connectivity with Europe through the Madrid hub, it will also increase its capacity with more than 7,400 new seats, as it will operate part of its flights to Rome, Milan, Frankfurt, Zurich, Paris and London with its Dreamliner fleet.