Where does eating beans with sweet come from? 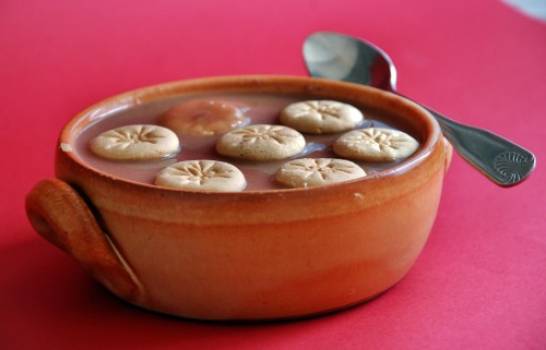 Beans with sweet an Easter tradition in the DR

There are nuances between the beans with sweets that are made in the Cibao and the South.

Sureños and cibaeños compete, like a healthy rivalry, where the beans come with desserts leaving a little grain in them.It should be noted that Dominicans, in their vast majority, prefer them without grains, so that grain issue is a discussion in which they dispute each other – with the permission of those who like to eat them with grains.

The journalist Adalberto de la Rosa recalls, he ate them with grains in Los Brazos, Jamao al Norte, Espaillat province, when he was a child more than 40 years ago.

Doña Nidia Rivera, a cibaeña woman in Upper Manhattan, known for her delicious beans with sweet, makes them with grains and without grains, the guest chooses. It should be noted that the Dominicans line up to eat the beans of Dona Nidia in New York. She is at the intersection of 182nd Street and San Nicolás Avenue, in Upper Manhattan.

But from San Cristóbal to Mrs. Matilde Mota, she likes to make beans by leaving “her little grain,” because that is how they prefer it.

Chef Inés Páez, Chef Tita, who has excelled in developing Dominican cuisine, says that beans with sweets with grains is a decision made depending on how the diner prefers it. “Some like grains, others do not.”

Chef Tita quotes the historian José G. Guerrero, who has written about the French bond of beans. Guerrero writes that the French Dorvo Soulastre, a French soldier who came to Santo Domingo accompanying General Hédouville on March 27, 1798, describes that at a table served “some beans” better care than others, which were “so thin and sugary as in France.”

Guerrero continues his story. “Another argument that connects the French sugar bean with the origin of the beans with sweet is that Soulastre described them on the eve of Holy Week, four days before Palm Sunday, indicating that they were part of this commemoration.”

The description of Guerrero is at the site Sabores Dominicanos.

Differences between southerners and cibaños

The folkloric researcher, Xiomarita Pérez, who has written several times about the beans with sweets, highlights more specific differences between the southern beans and cibaeñas.

Pérez points out that “some people do not add sweet potatoes to this rich dessert because it gives them ‘pulses’ in the South, ‘jervedero’ in the Cibao, or acidity. When the sweet potatoes are grown, the adults add a bit of ginger, so that it balances with the grains of beans and the sweet potato.”

But it is also added “the cookies of milk with the cross, and the casabe toasted with butter accompany this dessert. In the South, the spice they use is the malagueta and in the Cibao and other regions, cinnamon and clove.”

In some regions, they say beans with candy, in other beans with sweet. In the South they also make beans or “jabas” with dulce and the elderly people from Villa Jaragua and part of the deep South call this dessert “condolio” or “condolia,” perhaps because of the term “condolence,” which is the pain that we share for the death of a loved one, in this case, the death of Jesus Christ.

The contributions of Xiomarita Pérez on the beans with sweets are in the Dominican Folklore site.

Because of the historical description of Guerrero, the experience of Chef Tita, and the contributions of Xiomarita, the most probable thing is that from its origin, beans with sweets were grains, although some people like grains more than others.