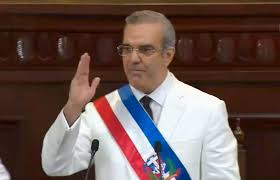 Santo Domingo.- President Luis Abinader said that from the beginning of his administration he ordered the removal of his picture from all government offices and instead asked the officials to place the photo of their own families so that they would repent before trying to commit any incorrect act.

“One of the first decisions I made was to remove my photo in all government offices, but why does it have to be (my image) if the administration of any president is temporary? I told them (the officials) to put the photo of their family so that when they see it before doing something wrong they will see their family and see their children and see their wife before taking an incorrect measure,” said the president.

“We must educate, we must eliminate that culture of authoritarianism, of the political boss and that I am the only one who can. It’s a lie, there are many people here who can be president and who can do it well,” said Abinader, interviewed by Patricia Solano and Juan Miguel Pérez