“Life outside our country is not as many paint it.” 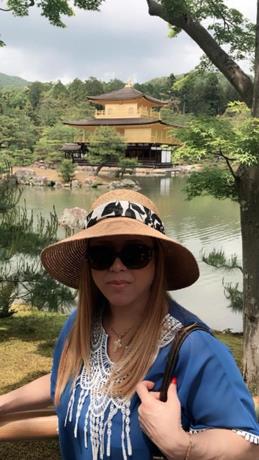 Dominican Carmen Cristina Cosma García has lived in Japan for the past 18 years. Posing in front of Kinkakuji Temple (Golden Pavilion), a UNESCO World Heritage Site located in Kyoto. PHOTOS COURTESY OF THE INTERVIEWEE

Separation from family, learning a different language, and adapting to food, climate and schedules are difficulties faced by the migrant.

Santo Domingo, DR
In search of a better quality of life for herself and her family, Carmen Cosma Garcia left her native Dominican Republic 18 years ago to settle on the other side of the world. Her destination: Japan.

Although here she divided her time between two jobs, the money she earned was barely enough to survive, explains Cosma, who is a native of Constanza and, upon leaving her homeland, was forced to separate from her two children, Wady and Miguel Ángel, who at the time were minors and were left in their father’s care.

She had high expectations because, as she rightly points out, Japan has a unique millenary culture; but even that could not prepare her for the trauma of migrating to a completely different society.

By 2020, some 281 million people will be living in a country other than the one in which they were born, estimates the International Organization for Migration (IOM). This is equivalent to 3.6% of the world’s population.

Most of them, as in Cosma’s case, fly away from their homeland for economic reasons.

In Japan, where the Dominican woman lives, 2.2 % of the population is made up of international migrants, according to the World Migration Report 2022.

The most challenging thing about living so far away? “Definitely being separated from my children, parents, and siblings,” says the 53-year-old.

Newly arriving on Japanese soil, Cosma had difficulty overcoming the language barrier and getting her palate used to Japanese food.

“Once I went to a supermarket and bought salt thinking it was sugar; I got to my apartment, made a coffee and when I went to drink it, it was salty,” she says.

With a thirteen-hour time difference between the Dominican Republic and Japan, it was difficult for her to fall asleep.

From working as an office worker and teacher in the Dominican Republic, she went to work as an operator in Japanese factories, a change that affected her emotionally.

“At first it lowered my self-esteem,” admits Cosma, who now lives in Hamamatsu, an industrial coastal city in Shizuoka province, and works in a factory that packages cosmetics for the Shiseido and Pola lines.

The Dominican woman took courage to overcome the instability and the process of adaptation she faced as an immigrant in a different culture. Her children and her parents, for whose well-being she had ventured to try her luck in Asia, served as her motivation.

The experience made her understand that before migrating to another country, it is essential to prepare mentally and psychologically, learn “at least a little of the language,” and be filled with “a lot of courage.”

“Life outside our country is not like many people make it out to be,” she says. “It’s hard to be so far away from the ones we love.”

Cosma has two granddaughters, but she has never met the youngest of them. It has been three years since her most recent visit to the Dominican Republic.

Although she has never felt discriminated against because of her race, she says she perceives workplace discrimination due to the wage gap between men and women.

The best thing about her life in the Land of the Rising Sun? The security, having found her current partner and enjoying more economic opportunities.

“It’s not that I’m a millionaire, but I have a better quality of life than I had before.”

It most be hard to learn Japanese; let alone live in japan too, its and odosey few dare to venture into.

Japan used to be amazing. The people are nice, the food is clean and tasty and healthy, and the nature is wonderful to see. I’ve lived there.

I ask this of democracy: If you are so good at governing society, why people leave their countries?
We all know that the Diaspora has to put up with discrimination, humiliation, abuses, confusion, unfamiliar customs and culinary habits, allergies, health issues, sadness (away from families), poverty, and an uncertain future or retirement.
So democracy, why so many people leave by the millions (Central America & the Caribbean) their native countries? You have failed to provide the needs of the natives and it is time to judge you for your failures!

First of all, there is so much bullshit in this story it must’ve been written by a thirteen year old. Wage gaps, doesn’t even speak the language and shows up at a factory looking for work where chances are someone had to hang over her shoulder explaining every little step considering she can’t read anything. There is clear mental instability in this person, imagine the conversation, “Hey, I’m moving”. “Where, a new apartment”? “No, Japan silly”. “Japan, you have no money saved, don’t speak the language or know anyone there…”I honestly think your should see a doctor because you’re not thinking rationally and this is a absolutely horrible idea”. This person who wrote this continues to show her delusions, when at one point she even paints the picture and makes it seem as though her children were ripped from her arms by her evil ex-husband. When the reality is that he’s probably suffered under her for decades, this is just the newest episode of batshit crazy. Not the U.S but Japan for it’s freedoms and millennial culture??? Dafuq? Also, the fact that at 35 years old she just sits up and says I’m moving to the other side of the world. Don’t even get me started on the scariest thing in the whole story, she was/is a school teacher? A tale of millennial, feminism and entitlement. The author and the subject are more than likely the same person because to not see the insanity in the story is in itself insane.