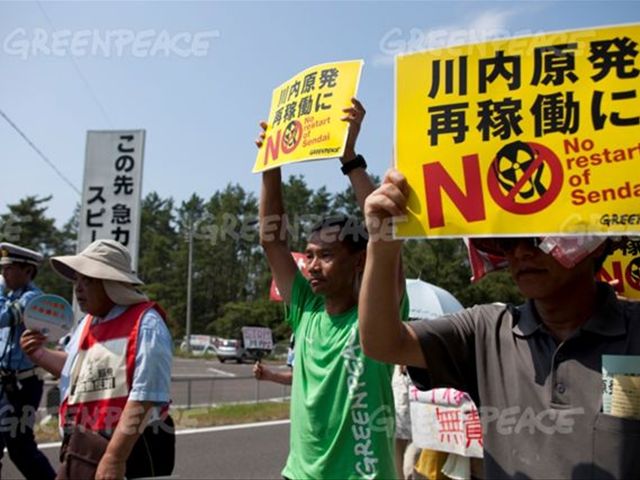 “Even though onenuclear reactor has restarted, the nuclear industry is still fighting for itsvery survival in Japan. The lengths to which safety issues have been ignored inthe Nuclear Regulation Authority’s (NRA) review process for the Sendai plantrestart shows just how desperate the nuclear industry and their governmentallies are,” said Mamoru Sekiguchi, energy campaigner at Greenpeace Japan.

“Rather than anuclear renaissance, much of Japan’s aging nuclear reactor fleet will neverrestart. Prime Minister Abe and the nuclear regulator are risking Japan’ssafety for an energy source that will likely fail to provide the electricitythe nation will need in the years ahead,” said Sekiguchi.

Greenpeace Japan’sanalysis released in April 2015, showed that nuclear power in 2030 will likelyprovide only between 2-8 per cent of Japan’s electricity generation, comparedwith the announced government target of 22 percent.

The Sendai unit 1reactor has not operated since May 2011. The NRA has failed to apply robustsafety measures to the Sendai reactor; including that:

an analysiscommissioned by Greenpeace Japan in February showed that the NRA also accepteda flawed volcano risk analysis from Kyushu Electric Power for the activevolcano Mt. Sakurajima, located only 50km from the reactor site;

the NRA failed torequire Kyushu Electric to complete its ageing related operational safety planbefore passing the reactor review; public opposition in Kagoshima prefectureincludes deep concern over the failure to have effective emergency planningmeasures, including plans for the evacuation of elderly and those in hospital.

Japan’s 43 remainingnuclear reactors have multiple safety issues, including seismic faults locatedat reactor sites and ageing related problems, which together with publicopposition are likely to force many reactors to be permanently shutdown.Looming on the horizon is the liberalization of the electricity market in 2016,which will expose large nuclear utilities to competition, including fromJapan’s fast expanding renewable energy industry.

“The NRA has admittedthat it can’t even guarantee safety if the nuclear reactor restarts. Yet, herewe are four years since the multiple reactor meltdowns at Fukushima Daiichiwith woefully inadequate emergency planning, and risk assessments based onfaulty seismic and volcanic data. We are in a tragic situation where the NRA ispandering to an increasingly desperate nuclear industry, rather than puttingthe lives and livelihoods of the people living in the shadow of the reactorsfirst,” said Kendra Ulrich, senior global energy campaigner with GreenpeaceJapan.

“The government’scurrent energy policy will not secure even the inadequate reductions in carbonemissions announced recently. The first step to a safe and secure energy futureis for Mr. Abe to abandon his obsession with trying to save the nuclearindustry, and allow the innovative renewable energy sector to grow. The peopleof Japan deserve to be able to choose clean, safe renewables,” said Ulrich.

Nuclear power is notneeded to secure deep carbon reductions. Renewable energy growth in Japan hasbeen explosive during the last four years. 24GW of solar energy has beeninstalled as of April 2015, with a further 58GW approved for installation.Japan’s nuclear fleet prior to the Fukushima Daiichi accident had an installedcapacity of 45GW. By 2014 investments for new solar photovoltaics had risen to2.6 trillion yen (US$25 billion) for 8GW.