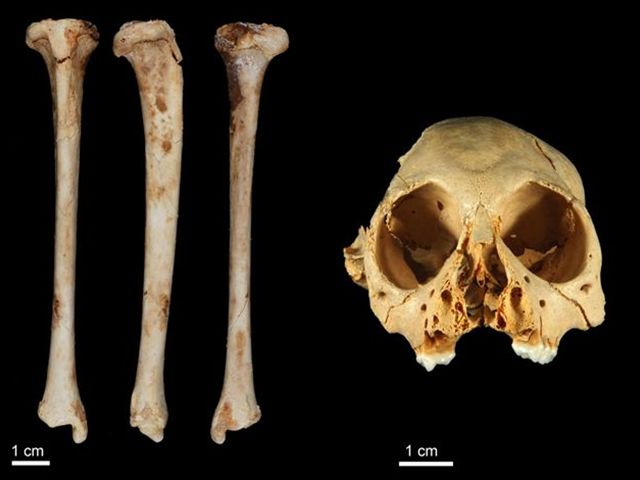 An international team of scientists have dated a species of fossil monkey found across the Caribbean to just over 1 million years old, eurekalert.org reports.

The discovery was made after the researchers recovered a fossil tibia (shin bone) belonging to the species of extinct monkey Antillothrix bernensis from an underwater cave in Altagracia Province, Dominican Republic. The fossil was embedded in a limestone rock that was dated using the Uranium-series technique.

In a paper published this week in the well renowned international journal, the Journal of Human Evolution, the team use three-dimensional geometric morphometrics to confirm that the fossil tibia does indeed belong to Antillothrix bernensis, a primate that we now know existed on Hispaniola relatively unchanged for over a million years. This monkey, roughly the size of a small cat, was tree-dwelling and lived largely on a diet of fruit and leaves.

Dr Helen Green of Melbourne University’s School of Earth Sciences, a lead researcher involved in the dating of the limestone surrounding the fossils, said the question of the age of primate fossils from this region has puzzled scientists since the days of Darwin and Wallace.

‘The presence of endemic new world monkeys on the Caribbean islands is one the great questions of bio-geography and our work on these fossils shows Antillothrix existed on Hispaniola relatively morphologically unchanged for over a million years. By establishing the age of these fossils we have changed the understanding of primate evolution in this region.’ said Dr Green.