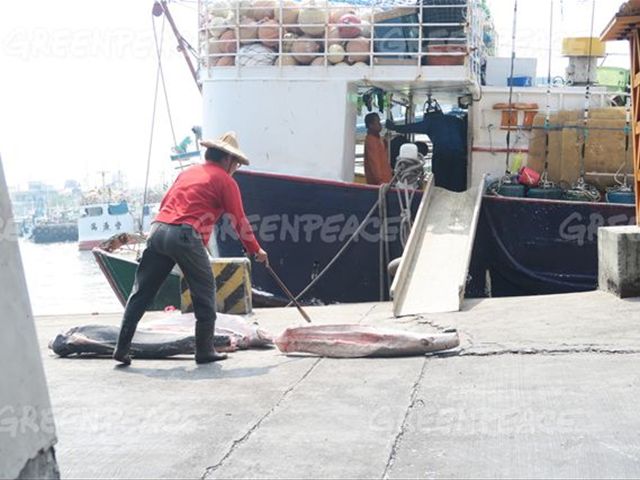 The findings released today in a Greenpeace East Asiareport come as a yellow card warning from the European Commission is about toexpire. Issued on 1 October 2015, Taiwan was given six months to clean up itsfisheries or face economic sanction by the EU.

Globally, Taiwan owns the most tuna longline vessels, andTaiwan’s tuna take puts it in the top six Pacific fishing entities. Taiwanesecompanies, like seafood giant Fong Chun Formosa Fishery Company, Ltd. (FCF),exports directly to markets and supply some of the world’s largest seafoodcompanies, including Thailand’s troubled Thai Union Group. Large amounts ofTaiwanese caught tuna are exported to Thailand for processing, where seriouslabour and human rights violations have been recently exposed. This not onlyrisks further contamination of Taiwanese products, but can also contaminateexports from Thailand.

“The fishing industries of both Taiwan and Thailand havebeen shown to have human rights problems,” says Yen Ning. “The murky tunasupply chains of companies like Thai Union have little transparency, whichmeans seafood lovers everywhere may be eating tuna tainted by humanexploitation and environmental crime, and they’d never know.”

These human rights abuses seem to go hand-in-hand withenvironmental abuses. Fins are not allowed to be separated from shark carcassesunder legislation Taiwan passed in 2012, but in a single three-monthinvestigation in just one port in Taiwan, Greenpeace East Asia uncovered 16illegal cases of shark finning. In contrast, an inquiry to Taiwan’s FisheriesAgency showed the same number of cases were recorded over the last 12 months,across the whole of Taiwan.

“The yellow card should be a wakeup call for Taiwan toreform its fisheries, eliminate human exploitation and environmental abuse, anddevelop sustainable management of precious marine resources,” says Yen Ning onbehalf of Greenpeace East Asia, “This isn’t just about trade, it’s aboutTaiwan’s responsibility to treat workers fairly and to contribute to theongoing sustainability of our oceans.”