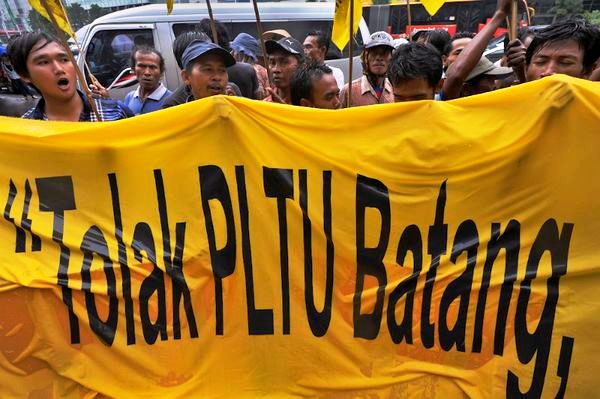 Jakarta, 30 March 2017 –  Activists today brought construction to a standstill for 13 hours at what will be the largest coal power plant in Southeast Asia.

The activists are demanding the Indonesian government cancel the Batang coal power plant project and that the Japan Bank for International Cooperation (JBIC) pull its financial support.

The protest is one of over 100 actions in over 60 countries against fossil fuels being coordinated by civil society and communities under the Break Free banner.

“This one power plant would release the equivalent of Myanmar’s total carbon emissions in 2009,” said Arif Fiyanto, Energy Campaigner at Greenpeace Southeast Asia.

“Not only will this coal plant destroy the local environment, it will pollute our air and contribute to the 6500 premature deaths in Indonesia every year linked to air pollution from burning coal. Indonesia must break its addiction to fossil fuels and banks such as JBIC must stop financing dirty coal projects.”

The twelve activists from Greenpeace Indonesia, WALHI, and Jatam, unfurled giant banners and occupied heavy equipment at the Batang coal power plant. They were supported by about a flotilla of about 100 local fishers who joined the blockade.

The action is in support of local communities that have opposed the project for five years because of its impact on agricultural land and waters. Many have taken legal action, participated in hearings with various government agencies, and even sent representative to Japan to meet with investors.

“It’s become very harder now to catch fish. The nets often get snagged and break because of the mud. Our income is also dramatically decreasing. We want the construction to be terminated,” said Jumiati, a local fishermen

from Batang. “We will continue to reject the development of the power plant. We will keep struggling and opposing this project,” said Dul Hakim, another local fisherman from Batang.

The coal plant, which will have a capacity of 2000 megawatts, will be built on 226 hectares of productive agricultural land, and within the Ujungnegoro-Roban Marine Conservation Area which is rich in fish and coral reefs that support livelihoods for fishermen from various regions on the north coast of Java.

“The government claims the project will meet the energy needs for Indonesians currently without electricity. But approximately 60% of the power being generated will be built in the industrial areas of Java and Bali, where 99% of people already have access to electricity. It would seem that this mega project is just being built to meet industry needs,” said Melky Nahar, Head of Campaigns at JATAM.

Break Free movement is a global coalition calling for the end of fossil fuels and a just transition to renewable energy through blockades, non-violent actions, community festivals and large marches.