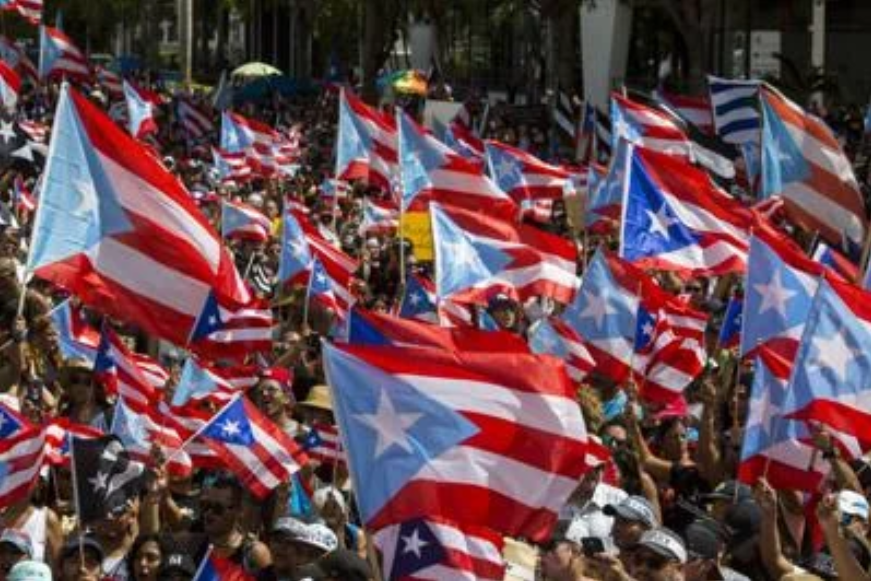 SAN JUAN (AP) – The unprecedented resignation of the governor of Puerto Rico after several days of mass demonstrations has plunged the island into a huge political crisis. Less than four days after Governor Ricardo Rosselló leaves office, nobody knows who will take his place.

The secretary of Justice Wanda Vázquez, successor according to the Constitution, said Sunday that she does not want the position.

The next in line would be Secretary of Education Eligio Hernández, a virtually unknown bureaucrat with minimal political experience. Rosselló’s party points out that he wants him to name a successor before making his resignation effective, but the governor has not said anything about his plans, time is running out and some on the island have even begun to talk about the need for greater federal control over a territory whose finances are already supervised by Washington.

Rosselló resigned after almost two weeks of daily protests in which hundreds of thousands of Puerto Ricans took to the streets, rode a horse or jet skis, organized a marathon of twerking and presented other creative ways to demand the departure of the ruler.

On Monday, protesters were scheduled for a new meeting, this time to demand that Vázquez not assume the governorship. Under normal circumstances, Rosselló’s successor would be the Secretary of State for the territory, but veteran politician Luis Rivera Marín resigned from his position on July 13 for his participation in the scandal that ended Rosselló’s term.

Vázquez, a 59-year-old procurator who worked as a district attorney and later headed the Office of the Women’s Procurator, does not have widespread support from the population. Many have criticized her for not acting strongly enough when investigating cases involving members of the party to which she and Rosselló belong.

She has also been criticized for not giving priority to the fight against gender violence as a secretary of Justice. She has also been accused of not investigating the alleged embezzlement of provisions for the victims of Hurricane Maria.

Faced with the new wave of protests, Vázquez tweeted on Sunday that he has no desire to be Rosselló’s successor.

“I repeat, I have no interest in occupying the position of Governor,” she wrote. “I hope that the Governor identifies and submits a candidate for the position of Secretary of State before August 2.” In the event that a secretary of state is not appointed before Rosselló leaves office, Vázquez would automatically assume the governorship.

In that case, the position of governor would be for Hernández, who replaced former Secretary of Education Julia Keleher, who resigned in April and on July 10 was arrested on federal charges of corruption to which she has pleaded not guilty. But Hernandez has not been clear about whether he would accept the governorship.

“At this time, this server is focused solely and exclusively on the work of the Department of Education,” he said Monday in statements to Radio Isla 1320 AM. “I never anticipate the possibilities.” Meanwhile, Puerto Ricans have expressed concern about what the lack of leadership could mean for the political and financial future of the island.

“It is very important that there is a degree of stability in the government,” said Luis Rodriguez, a 36-year-old accountant, who added that all political parties should pay attention to what is happening. “We are already tired of the situations of the different political parties that always climb to power and have let us down a bit and have taken the country to where it is right now.”

Héctor Luis Acevedo, a university professor and former secretary of state, said that both the ruling party and the main opposition faction he supports, the Popular Democratic Party, have weakened in recent years. He added that new leadership needs to be found soon. “These uncertainties are dangerous in a democracy because they tend to reinforce extremes,” he said.

“The vacuum hurts the country a lot.” Until recently, Puerto Ricans had celebrated that Rosselló and more than a dozen officials had left their posts after the existence of a chat full of obscenities in which they mocked women and victims of Hurricane Maria, was announced throughout the 889 pages that leaked on July 13.

But now, many of them worry that the government is not acting fast enough to restore order and leadership on an island that is plunged into a 13-year recession while struggling to recover after the passing of a Category 4 storm it tries to restructure a portion of the public debt of 70,000 million dollars.

Gabriel Rodríguez Aguiló, a member of the New Progressive Party of Rosselló who is in favor of statehood, said in a telephone interview that lawmakers are waiting for the governor to nominate a secretary of state, who would assume the governorship before the disinterest of Vazquez in office.

“The person that I hope to be named must be a person who has respect for the people and who gives hope to the people of Puerto Rico and who has the capacity to govern,” he said.

“There can be no hurry. There must be sanity and restraint in this process. ” The representative of Puerto Rico in Congress, Jenniffer González, recently presented another alternative. Last week she called on President Donald Trump to appoint a federal coordinator to oversee the reconstruction work after the hurricane passed and ensure the proper use of federal funds in the US territory, a suggestion rejected by many on an island whose Finance and restructuring process are already managed by a federal supervisory board.

While lawmakers wait for Rosselló to nominate a secretary of state, they have initiated a debate on amending the constitution to include a vice president or deputy governor, among other things. Currently, the constitution does not allow the government to make early elections, said Yanira Reyes Gil, a university professor, and constitutional lawyer.

“We must rethink the Constitution,” she said, adding that there are gaps in the current Magna Carta, including the fact that the people are not allowed to participate in the election of a new governor in case the former resigns. Reyes also said that people are worried that the island’s Congress is quick to approve the new secretary of state without sufficient investigation.