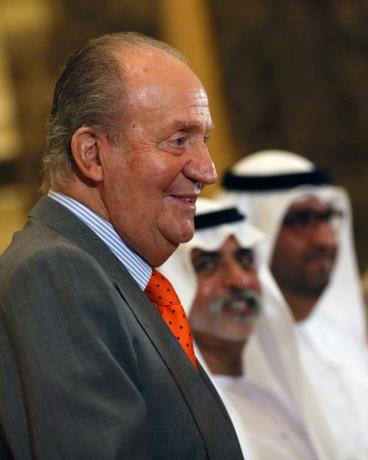 Neither the information nor the theories cease in the Spanish media about the possible location of the emeritus King Juan Carlos I of Spain, for now publicly unknown when this Monday marks a week since the announcement of going to live abroad for an indeterminate time.

In any case, their security “concerns the Spanish State,” said the Interior’s Spanish minister, Fernando Grande-Marlaska, on an official visit to Algeria, although without giving further details.

The former head of state communicated to his son, Felipe VI, the “thoughtful decision” to move out of Spain due to the public repercussions of “certain past events” in his private life (about supposed opaque businesses), reported the royal house Spanish 7 days ago.

According to the letter made public by his lawyer, Javier Sánchez Junco, he remains in any case at the disposal of the Spanish Prosecutor’s Office for any procedure or action deemed appropriate.

The revered king contacted several friends, to whom he commented that his departure from Spain was a “parenthesis,” leaving open the possibility that it may be a short journey.

Amid high expectation, Felipe VI began today in the city of Palma, where he rests with his family, his institutional agenda of hearings with regional authorities of the Balearic Islands (Mediterranean).

It is the first official activity of the king after last Thursday he received the Minister of Foreign Affairs of Uruguay, Francisco Bustillo, at the Palacio de la Zarzuela, in Madrid.

However, nothing emerged from today’s meetings about possible comments regarding his father’s departure, where he is, or where he will settle.

The president of the Balearic Islands, Francina Armengol, avoided clarifying whether they addressed these issues.

“My concern and my obsession are for the citizens of the Balearic Islands (…). The Casa del Rey must give explanations about everything else. It is not my turn,” he told the press after the hearing, concerned about the “Complicated” socioeconomic situation in the Balearic Islands, caused by the coronavirus epidemic. He specified that, had he dealt with the king emeritus, he would not reveal it.

Besides, Felipe VI, Queen Letizia, and their two daughters visit this Monday on the island of Mallorca, the birthplace and museum of the 18th-century Spanish missionary Fray Junípero Serra, whose statue was demolished in the city of San Francisco during recent anti-racist protests from the USA.

Portugal, Dominican Republic, United Arab Emirates, New Zealand. These are the destinations or places of transit mentioned most insistently by the Spanish media during these days, sometimes with great informative and graphic display.

The truth is that, since he left the Palacio de la Zarzuela, the royal house did not confirm or deny any of this information, nor does it intend to do so. It considers that it is the emeritus king responsible for deciding whether and when to communicate it.

The Spanish Government did not give clues about his whereabouts but granted that both its president, the socialist Pedro Sánchez, and other cabinet members are aware.

NEXT WEDNESDAY, Felipe VI will receive Sánchez in the traditional summer office in Palma between the Head of State and the Executive. And the situation of the King Emeritus will be, predictably, one of the issues they will talk about, in addition to the severe repercussions of Covid-19 in Spain, where infections are advancing.

His departure from Spain also triggered new friction in the Spanish coalition government. The representatives of United We Can and its leader at the head, the leftist Pablo Iglesias, reproached President Sánchez for not informing them previously. According to their interpretation, It is a “flight” of the emeritus king to avoid the action of Justice.

It was also used by Catalan leftist and pro-independence parties to fan criticism of the monarchy and demand a referendum on the issue.

According to a resolution approved on Friday by the separatist majority of the Catalan regional Parliament, “Catalonia is republican and, therefore, does not recognize or want to have a king.”

Such is not the case of the Socialist Party of Sánchez, who considers Felipe VI’s measure of “marking distances” with his father “adequate” and supports the current constitutional parliamentary monarchy.

The Spanish newspaper La Razón published this Monday a poll in which 54.8% favor the monarchy, compared to 38.5% who prefer a republic. 71.3% think it good or very good that king emeritus establishes residence abroad.

In another survey, the newspaper El Mundo reported yesterday that the majority, 67.2%, consider “very” or “quite important” the institutional role of Juan Carlos I in the Spanish democratic transition and throughout his reign. However, 80.3% believe that they must answer before the Justice for possible tax crimes.